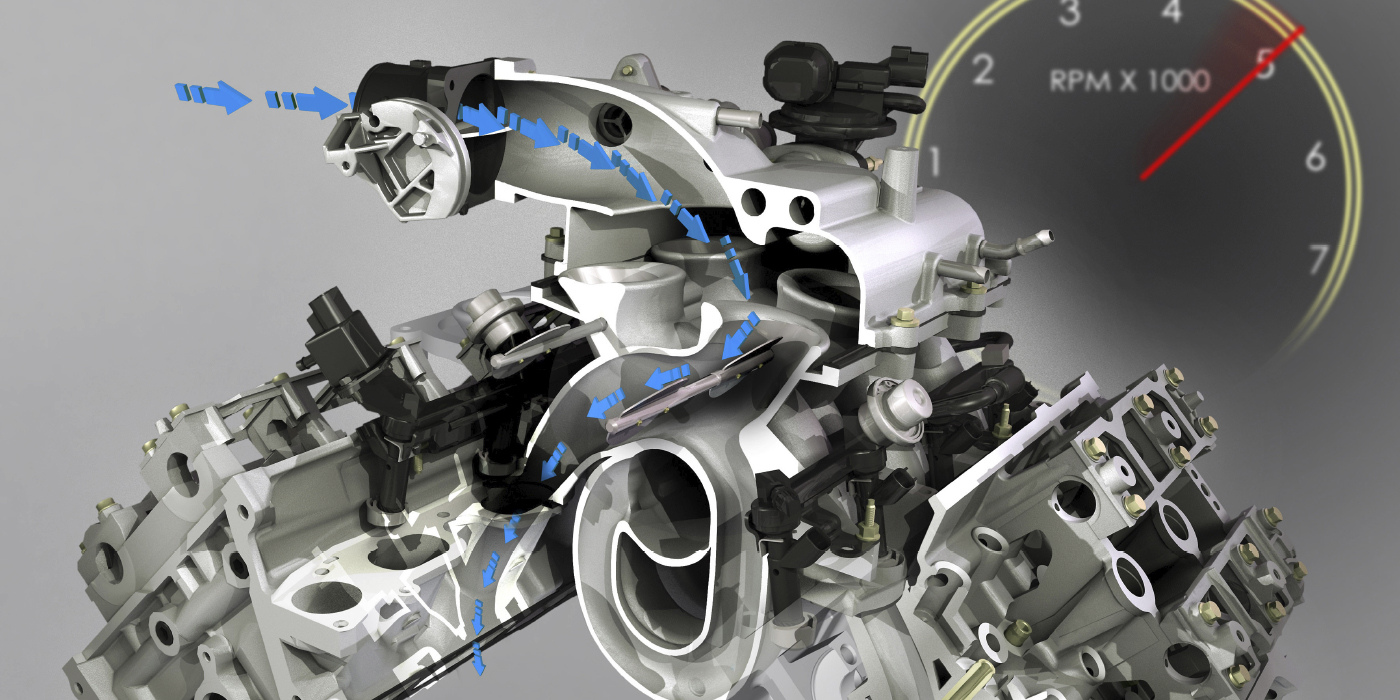 Variable-length intake runners change the length of the intake passages depending on engine speed and load.

Fuel gets all of the attention when it comes to engine diagnostics. In the past, you took it for granted that air would travel unimpeded from the throttle body to the intake valve. But, with modern engines, the air’s movement is optimized with moving flaps and valves. These new components can add a new wrinkle for some diagnostic dilemmas.

Some engines change the runners’ length by changing how the air is directed in the plenum of the intake manifold. Runner length can be altered by having two different air circuits in the manifold with a flap to direct the air to the short and long runners. Some performance manifolds will lengthen and shorten the runner with an actuator inside the plenum.

When these systems fail, it can cause loss of power, hesitation and increased fuel economy. For basic systems, codes related to fuel trim may result. For systems with a position sensor for the flaps, malfunction codes will be stored if a flap fails to move when actuated.

Variable-length intake flaps can be powered by engine vacuum or electric motors. The majority of systems use vacuum actuators connected to electronic solenoids.

Everybody knows a football thrown with a spiral will travel further and straighter. The same is true with air passing through the intake manifold and into the combustion chamber.

Engineers have been making the air swirl in intake manifolds and valves for more than 50 years. But swirling was only effective at certain engine speeds and load conditions.

Some late model intake manifolds use valve or flap positioned at the end of the intake runner before the intake valves. What has made this possible is moving the fuel injectors out of the manifold and into the combustion chambers. This has allowed engineers to put flaps or valves in the intake manifold runners. These valves control the size and shape of the intake port to airflow over a wider range of engine speeds.

Various automakers have different names for their valve system. Hyundai calls it the Variable Charge Motion Actuator (VCMA). Volkswagen uses flaps that close down the ports on its direct-injected engines called the Variable Tumble System (VTS). Toyota calls it a tumble/swirl valve. The one thing these systems share is that they have plastic parts that can break and actuators that can fail. Some of them can be the source of a vacuum leak.

These systems typically have position sensors that will trigger codes if they see the actuator not moving at all or moving at a reduced rate. Some failures will cause misfires and fuel trims that might be too lean or too rich.

The most common failure of variable length runners and valve flaps are leaks around the shafts and actuators. Most shafts are sealed with O-rings or soft bushings that can wear out over time; this can lead to unmetered air being sucked in when under vacuum. This can cause lean codes and uneven idle. The seals or bushings on some manifolds can be replaced; others might require complete replacement of the intake manifold.

Another common issue can be leaking vacuum actuators. The diaphragm of the actuator can leak and not move the flap or valves. Some engines use a vacuum pump for the actuators. If the pump fails, it will not only affect the movement of the actuators but the performance of the brake booster.