The 3.0L Duratec V6 was introduced in 1996 to replace the aging 3.8L V6 in the Ford Taurus and Mercury Sable. Unlike its conventional pushrod predecessor, the 3.0L V6 has dual overhead cams, four valves per cylinder and an aluminum block with cast-iron cylinder liners. 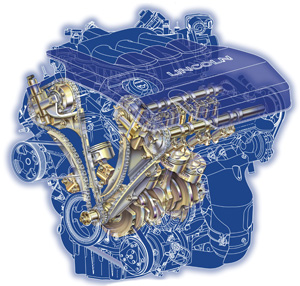 The dual overhead cams on the Duratec engine are chain driven, so there’s no timing belt to replace.
Over the years, this engine has undergone continual evolution and has been produced in several variations, including:
• A 208 horsepower version with roller finger followers for the Taurus and Sable, and the 2001 and later Ford Escape and Mazda Tribute.

• A Variable Valve Timing (VVT) with electronic throttle control for the 2003-’06 Lincoln LS, 2003-’06 Jaguar X-Type applications, 2006 Ford Fusion, Mercury Milan and Lincoln Zephyr, and 2009 Ford Escape. On the 2009 Fusion, a new type of VVT system called “Cam Torque Actuated” (CTA) is used to advance cam timing. The cam phaser generates its own internal pressure rather than relying on oil pump pressure to move the cams. The result is more advance (47°) and better fuel economy.

Though the 3.0L Duratec V6 has had a relatively long production run, its successor is the larger displacement 265 hp 3.5L Duratec V6, which powers the 2007 Ford Edge, Lincoln MKX and MKZ, and 2008 and later Taurus and Sable, and 2009 Ford Flex. An even larger 275 hp 3.7L Duratec V6 with a 95.5 mm bore is used in the 2008 Mazda CX-9 and Lincoln MKS, and 2009 Mazda 6. Ford says it will continue making the 3.0L V6 for several more years with additional improvements to reduce emissions and improve fuel economy. 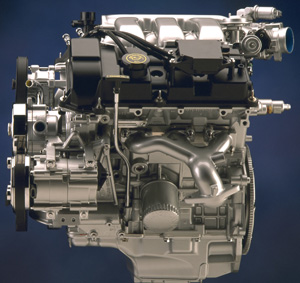 3.0L Variants
The first-generation 3.0L Duratec blocks produced from 1996 through 1998 can be identified by the “F5DE” casting number on the engine block. In 1999, Ford changed to a slightly different casting (XW4E) which has different coolant passages on the right side that require a different head gasket. Install an old style head gasket on this  engine and it will leak coolant.

The following year, Ford revised the block casting slightly and reduced the size of the knock sensor threads from 12 mm to 8 mm. Other than that, the 1999 and newer blocks are interchangeable. The 2000-’04 blocks use casting number XW4E-BA.

The cast iron liners in the aluminum block can be bored to oversize if the cylinders are worn or tapered. Flat-top pistons with a slight dome are used without valve reliefs in the older 3.0L Duratec engines that do not have variable valve timing, but pistons with four valve reliefs are required for additional valve clearance in the newer versions with VVT. The compression ratio is the same, so the newer pistons can be used in the older applications.

All the Duratec engines use powder metal connecting rods with cracked (fracture-split) caps. Rod lengths and weights are all the same, and can be interchanged from one year to the next. If the big end of the rod is worn or stretched, though, the rod has to be replaced because cracked caps cannot be ground to resize the bearing opening.