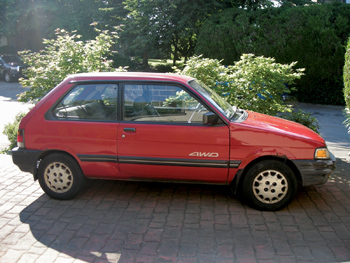 When we decided to purchase a new shop shuttle vehicle, we began our research with looking at AWD vehicles that would do well in the snow and provide a comfortable car to drive customers to work or home. We focused on the brands in which we ­specialize — Honda, Toyota and Subaru.
With the 2010 Subaru Outback being an all-new model, we decided this would be our best choice. Once I began looking at the new model, I was somewhat surprised to see that Subaru was re-introducing the Continuously Variable Transmission (CVT).

Admittedly, I was somewhat concerned based upon my first introduction to the CVT in the Justy model back in the early 1990s. This first introduction was not well received in the industry. I decided to do some research, as the CVT transmission has been used with success in many applications, from ­machinery to aircraft to specialty vehicles such as snow mobiles and ­Polaris ATVs.

In the automotive industry, there are a few ­different CVT variations, with most of the Toyota ­hybrids using a Power Sharing Transmission (PST). The CVT version uses only one input from a prime mover, whereas the PST type uses two prime mover inputs, but, fundamentally, the driving experience is similar. 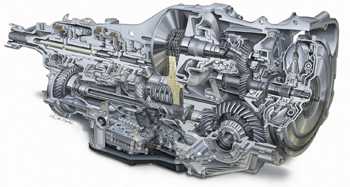 From a customer’s perspective while ­accelerating, the transmission can feel like it’s slipping as the transmission provides the best gear ratio for the engine at any given time. For comparison’s sake, a traditional transmission has four, five and even six speeds to provide gear ­ratios to mate with the engine speed to provide optimal performance. On the other hand, the CVT variation has an infinite number of gear ­ratios that provide peak performance. This is the real benefit of the CVT transmission: it allows for an ­infinite number of simulated gear ratios to maximize power as well as fuel economy.

As this technology continues to improve, I think the industry will see more vehicles using some configuration of the CVT-style transmission. Toyota has used a ­Variable-Diameter Pulley (VDP) system in its ­hybrid vehicles with good success; and we’ve seen many Prius vehicles with well over 100,000 miles with no ­failures.

Most of the Subarus with the CVT transmissions that we get in for service have between 30,000 and 90,000 miles, and we have not seen any issues related to the CVT. The one common complaint we hear from customers is that the CVT is very noisy upon initial startup, especially in cold conditions.

While doing my research for this article, I checked with two Subaru dealers in the area and asked if they are seeing any failures with the CVTs, and both dealers indicated they have each had one failure to date. I also contacted the ­Nissan dealer that we buy our parts from and ­inquired about their similar version, and all they would say is that they have had multiple failures with the Nissan version of the technology.

SERVICE IMPLICATIONS
As for what this mean for us in the aftermarket, there are a few service bulletins related to the CVT. One is for a cooler line leak on some 2010 ­Outback models, which requires an updated hose; another bulletin is for a “difficult to get out of park” complaint that requires replacing the shift indicator ­assembly. As for service intervals, there is no recommendation from the manufacturer for fluid changes, but our Subaru dealer advises (and I would agree) that under extreme use it, would be prudent to change the fluid at around 90,000 miles. The fluid is currently sold only in a 5-gallon bucket, P/N SOA868V9245.

Subaru also provides some computer updates that require a factory scan tool — a must if you work on a lot of Subarus. Having a good working relationship with your local dealer is a big help, as we can attest. Tim, Colin and their crew at Shingle Springs Subaru always keep us up-to-date on the latest information available to keep our customers’ Subarus on the road.

Manufacturers have focused on introducing this technology in models that have a focus on gas mileage initially, but are gradually including other models in their lineup. One of the challenges has been to get the more powerful ­engines and the transmission to provide peak performance and fuel economy, while keeping a driving experience that is somewhat normal for the driver.

The theory of infinite gear ­ratios to achieve performance and fuel economy in the traditional transmission configuration has been taken to the extremes from a two-speed automatic in years past, to many late-model vehicles that have six-speed automatic transmissions or more.

Just as we have seen fuel systems change over the years from carburetion to early fuel injection to precise fuel management, and engines advance to more valves per cylinder, variable valve ­timing as well as low-friction ­designs, transmission technology will continue to evolve and most manufacturers will introduce CVT technology into their lineup in the near future.

From a pure enthusiast point-of-view, driving my 2013 Lexus GS350 sedan with six-speed ­automatic in the sport mode is much more exciting than driving the Subaru Outback with the CVT transmission, but practicality says many manufacturers will be introducing more variations of the CVT into their lineup in the coming years. 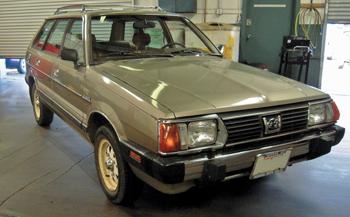 This car was purchased new in June 1981 from Allred’s Subaru located in Sedona, AZ, by the Spoor family for the out-the-door price of $9,891.73. The owner traded in his 1977 Subaru 4×4 with only 15,000 miles! The car has since been given to his daughter, who continues to use it daily, driving on the backroads of Nevada County, CA, to monitor archaeological sites for the Tahoe National Forest, Bureau of Land Management and California State Parks. The car currently has only 59,000 original miles on it. ­Nothing’s gonna stop this Suby! 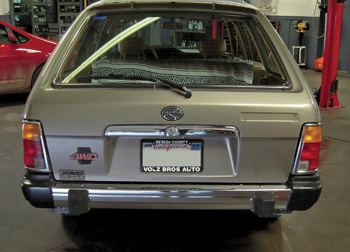 Subaru: Being Different Is A Good Thing

Subaru is a company that has consistently tried “out of the box” things — horizontal water boxer engines, the Hill-Holder System, passing lights and the Brat pick-up truck, to name a few. It’s a tough little carmaker that certainly isn’t afraid to be different.