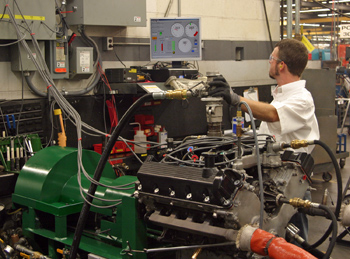 The test stands at the Jasper, IN, facility are being fitted with computers running a JASPER-written automated test program (using software from National Instruments).  Over time, this conversion will occur on live-run test stands at the Crawford County and Willow Springs, MO, facilities.

While computer-assisted programs have been used to monitor live-run testing in the past, it was the role of the operator to check the gauges and write down the correct numbers.  But the operators are expected to test a predetermined number of engines each day.  “The operator prepares one engine for testing while another is being tested on the stand,” says Jacob Adams, JASPER Corporate Engineer.  “This can lead to missing that critical engine temperature (145 degrees Fahrenheit) where we need to get our measurements.  It only takes a couple degrees for the values to drastically change.”

Once the operator has the test stand ready, the engine is started and run at 1,400 rpm.  From the moment the engine starts, the automated data acquisition system monitors critical readings and takes a data snapshot once engine temperature reaches 145 degrees.  This can be from as little as five minutes for small 4-cylinder engines, to as long as 15 minutes for big-block V8s.  “The data acquisition program collects readings on oil temperature, oil pressure, water temperature, vacuum and correct rpm range,” says Adams.  “Once the live-run test is complete, the engine is shut down and the system can acquire compression data.”

The automated data acquisition program can shut down an engine during a test should readings exceed pre-determined parameters.  “The system is always watching the temperatures and pressures,” says Adams.  “So if it sees a spike in water temperature, or a loss of oil pressure, it immediately shuts down the engine, reducing potential damage.  The program will also alert the operator as to the reason for the engine shutdown.”

The automated program gives JASPER a good standardization process to all of the live-run test stands.  “In the past, using the manual gauges, we could not obtain repeatable results from different gauges on different stands, added Adams.  “Borderline engines that would pass live-run testing are now being rejected on the stand, thereby reducing the chance of a customer warranty issue.”

For more information on the remanufactured gas engines of Jasper Engines & Transmissions, call (800) 827-7455, or log onto www.jasperengines.com.