By Underhood Service Staff Writers
May 24, 2011

The basic concept behind balance shafts has been recognized for nearly a century. Contrary to popular belief, the internal combustion engine has an inherent second-order (twice engine RPM) vibration that cannot be eliminated no matter how well the internal components are balanced. 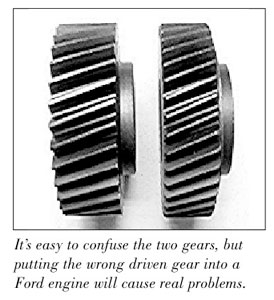 To deal with the harmonics, engine designers often incorporate two balance shafts rotating in opposite directions at twice engine speed. Equal size eccentric weights on these shafts are sized and phased so that the inertial reaction to their counter-rotation cancels out in the horizontal plane, but adds in the vertical plane. This gives a net force equal to, but 180 degrees out of phase with, the undesired second-order vibration of the basic engine, thereby canceling it. In a "V" configuration the same may be accomplished by opposite counter weights on the same/single shaft. The ultimate result is to eliminate NVH (Noise Vibration Harshness).

Now that we have the boring – but necessary – history out of the way, let’s move on to the important stuff. The meat and potatoes, as it were, and we will skip the utensils and just eat with our hands (as men were meant to eat)! The 3.8L, 3.9L and 4.2L Ford engines in the same family configuration have had these shafts at various times and in different vehicles but that is something to talk about in the future and not the issue here. The issue at hand is recognizing change in the amount of teeth of the drive and driven gear. A similar example is the Pontiac 2.5L engine. If you ever saw one of those mis-matched entanglements it was ugly. 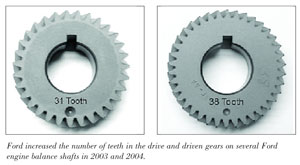 The change in teeth was to further reduce the NVH of the gears that drive the balance shaft. Obviously a mix up would result in a catastrophic failure.

However, what I have found is that as long as you keep the camshaft drive gear and balance shaft gear matched it makes no difference which ones you use.