Since I started contributing to ENGINE BUILDER, I have written about a number of different crankshafts for various different engines and manufacturers. 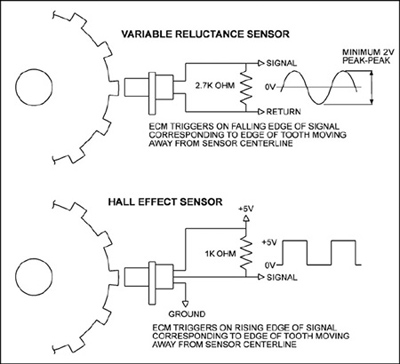 I have suggested to you to watch for this and make sure that you have that, and encouraged you to be certain that it is indexed to this position and so on.

But I don’t believe that I have ever written about watching out for damaged as-cast reluctor rings, spark triggers or whatever other name some manufacturer has given them to create their own identity/ownership. It’s not as bad as the variable displacement acronyms but still running a close second. 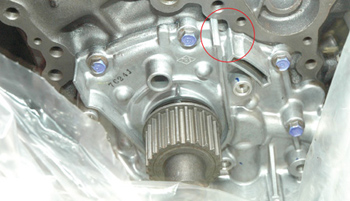 This information is necessary to control ignition timing and the operation of the fuel injectors. The signal from the crank sensor also tells the PCM how fast the engine is running (engine rpm) so ignition timing can be advanced or retarded as needed. On some engines, a separate camshaft position sensor is also used to help the PCM determine the correct firing order. The engine will not run without this sensor’s input.

There are two basic types of crankshaft position sensors: Magnetic Field (Variable Reluctance) and Hall Effect (Figure 1). The magnetic type uses a magnet to sense notches in the crankshaft or harmonic balancer. As the notch passes underneath, it causes a change in the magnetic field that produces an alternating current signal. The frequency of the signal gives the PCM the information it needs to control timing. The Hall Effect crank sensor uses notches or shutter blades on the crank, cam gear or balancer to disrupt a magnetic field in the Hall Effect sensor window. This causes the sensor to switch on and off, producing a digital signal that the PCM reads to determine crank position and speed.

If a crank position sensor fails, the engine will die. The engine may still crank but it will not start. Most problems can be traced to faults in the sensor wiring harness. A disruption of the sensor supply voltage (Hall Effect types), ground or return circuits can cause a loss of the all-important timing signal, just as a crankshaft with a damaged or missing cog/tooth in the trigger wheel of the as cast Reluctor ring (Figure 3) will cause problems.

There are many crankshafts with as-cast reluctor rings that have one of the notches machined to identify number 1 cylinder at TDC. Because they are part of the iron casting, these machined areas are very fragile. Remember, cast iron is brittle and has very little elasticity.

What you see here is indicative of many crankshafts that have Reluctor wheels to identify the number 1 cylinder.  If this small center lug is somehow broken off or damaged so that it no longer provides a good signal the engine will not run.

I know this because of a course that I took in SHoKU (show’ coo) (School of Hard Knocks University) when an engine was sent out and it would not fire. So pay close attention to the way that you handle any and every crankshaft that has an “as cast” reluctor ring on it because the engine you may save could be the one that goes to a friend or a one of your best customers.

I leave you with one last Professional Builder Tip (PBT) quickie, for the 3VZE Toyota engine oil pumps. We have found that there is a casting lug that is on the top of the pump (Figure 2) that can give you a leak. If it is too long or has too much material a casting lug on the top of the pump that it will intersect with a machined area of the block and not allow the oil pump to seat completely, yet the bolts will still torque.

The result? You will end up with an oil leak resulting in a comeback. So watch to make certain that this casting lug clears the block and the oil pump seats properly in its designated area.

Roy Berndt has decades of machine shop experience. He is the Program Manager for PROFormance Powertrain Products, a PER in Springfield, MO. He can be reached by email at [email protected].