1990 — The intake system was upgraded to Tuned Port Injection for more horsepower and torque. Also, a one-piece rear crankshaft oil seal was offered in some 3800 engines to reduce oil leaks.

1993 — The 3800 V6 got roller rocker arms, a higher compression ratio, and another reduction in piston ring tension to improve fuel economy and performance.

Service Issues
One of the reasons why the 3800 has had such a long production run is that it has been a very reliable, trouble-free engine for the most part. Many of these engines have racked up well over 200,000 miles with normal maintenance.

One of the few trouble spots has been coolant leaks on the Series II 3800 engines with the plastic intake manifold. The OEM intake manifold gasket tends to deteriorate after 60,000 or so miles in the area that seals the cylinder head coolant passage to the manifold. The seepage of coolant past the leaky gasket leads to overheating, and may cause bearing damage if coolant leaks down into the lifter valley and gets into the crankcase. The fix is to replace the OEM gasket with an improved aftermarket gasket, or the revised OEM gasket (P/N 89017554) per GM bulletin 04-06-01-017 issued in May, 2004.

The coolant leakage problem has been blamed on a number of factors, including coolant neglect and a less-than-robust OEM intake manifold gasket design. Though Dex-Cool is supposed to last up to five years or 150,000 miles, some say changing the coolant every two years can avert many of the problems that occur with aging coolant. Also, if the coolant level gets low, oxygen mixes with the coolant, which tends to cause problems with Dex-Cool.

On these engines, it’s not a bad idea to add a bottle of cooling system sealer to the cooling system for preventive maintenance, whether the coolant needs changing or not. The sealer will circulate with the coolant and hopefully stop any small seepage leaks in the intake manifold gasket from getting any worse, at least for a while. This may save your customer the expense of having to replace the intake manifold gasket. If the gasket is already leaking, sealer may plug it up temporarily. But, eventually, the gasket will have to be changed.

Another coolant leak problem prompted GM to issue a recall on certain 2000-’03 model year Chevys, Buicks and Pontiacs with the 3800 engine. The coolant leak on these engines was at the gasket between the intake manifold and throttle body or, in some cases, between the upper and lower intake manifold. The recall involved replacing the three throttle body fasteners, applying sealer to the threads, and dumping some sealer pellets into the cooling system reservoir. Recall 03034 was issued in July, 2003, but was only good until July, 2004. If a vehicle was repaired under this recall, there should be a GM recall decal affixed to the engine or under the hood. 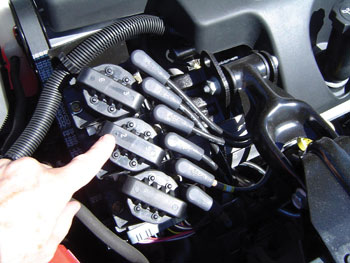 requires more saturation time (loner dwell) and a higher primary current. This allows the coils to produce up to 40Kv if needed.

If you have a 3800 that cranks but won’t start because there is no spark, check to make sure the coils have voltage when the key is on. If there is no trigger signal from the crankshaft position sensor, the PCM won’t fire the coils and there will be no spark.

The coil pack on these engines runs hot, so it’s important to make sure there is heat sink grease under the coil to transfer heat. If the coil module gets too hot, it will fail.

If an engine is hard to start or has a misfire at higher speeds, the problem may be a weak coil, a bad plug wire, or a fouled or worn spark plug. On 1996 and newer vehicles, you should get a cylinder misfire code. A code for one cylinder would likely indicate a fouled plug, bad plug wire, or possibly a clogged or dead fuel injector, or a compression leak (burned exhaust valve). Misfire codes for two cylinders that share a coil would likely point to a bad coil.

If you test a coil with an ohmmeter, the test specs are 0.5 to 0.9 ohms for the primary terminals under the coil, and secondary resistance of 5,000 to 8,000 ohms at the high-voltage terminal.