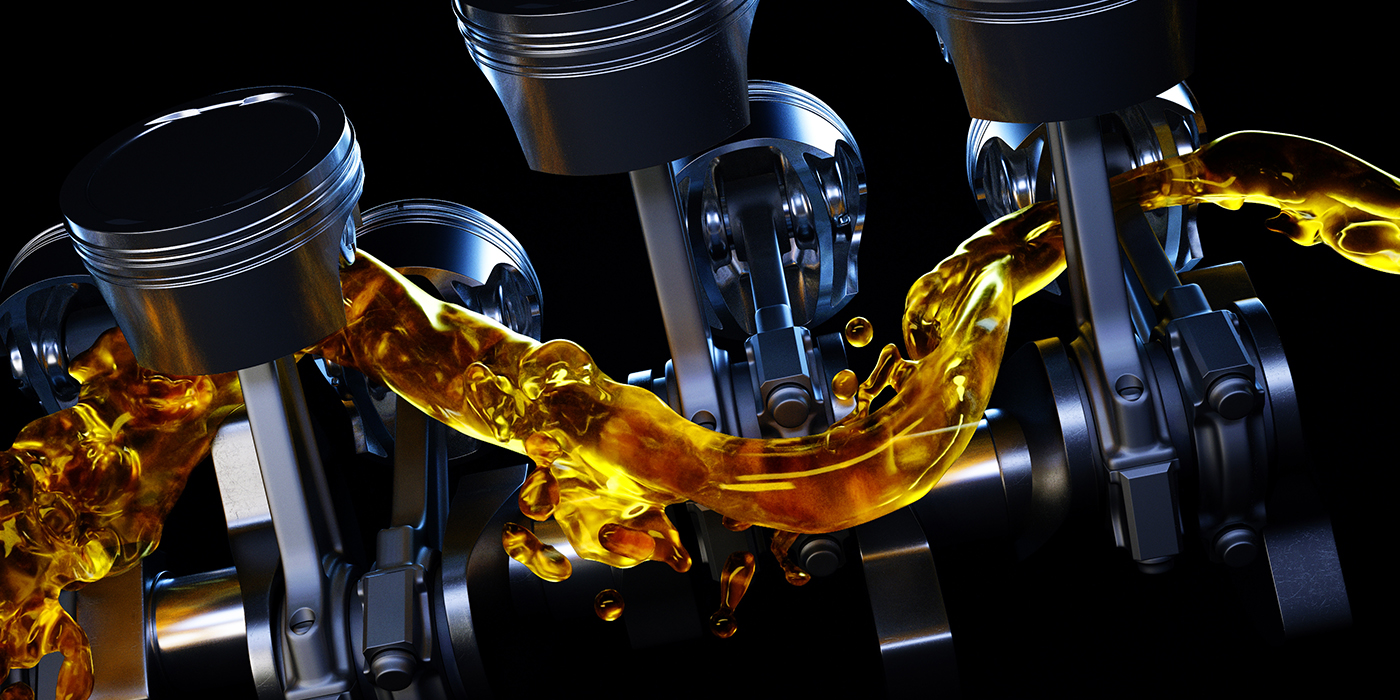 Oil clearances will not always be the same for each application.

Depending on your application, an LS engine is a versatile powerplant and is used for many forms of motorsports – whether it is drifting, drag racing, or road racing and track day events. But the oil clearances will not always be the same for each of these applications. It is up to you, the engine builder, to decide what your customer’s oiling needs will be when it comes to clearances and keeping the sump submerged.

A clearance for road racing vs. high horsepower or naturally aspirated vs. a turbocharger/power adder is not all the same!

On a road race application, for example, that makes around 550-600 hp, some engine builders say you need tighter clearances because the block grows under longer loads and pressure as the clearances increase during a race.

You can test this by measuring the block at ambient temperature and then again after it’s been brought up to operating temp in an oven. Drag racing doesn’t create the kind of temperature rises and block growth that an endurance application will. No one bearing clearance fits all; it’s up to you to make sure you spec/build for what your customer intends to do with the engine.

Your bearing clearance is essential because it establishes the viscosity of oil you will use within a given oil temperature range, according to Ken Tyger, PennGrade1/D-A Lubricant Company. “The tighter the bearing clearance, the lower the viscosity the engine can use, while larger bearing clearances require thicker oil. This typically leads to the question of what would be the best viscosity for a race engine? We have found that it depends more on how the engine is operated than the displacement or power output.”

Tyger recommends heavier oil for specific applications where the engine is run for extended times (i.e., circle track and road racing) or driven to the staging lanes and back. “In any situation where the oil temperature will remain above 150 degrees F – a heavier oil (20W50) is preferred. The exception is drag engines towed to the staging lanes, raced, then pulled back to the pits. We have found that these engines are happier with lighter oil in some situations since the oil temp never gets to a range where the oil flows appropriately.”

Modern engine oils were designed with a different agenda – although ideally suited for the needs of a modern engine (i.e., LS engines), this does not translate into the most appropriate lubricant for a high-performance engine where higher levels of antiwear are needed.

Using lighter oils comes at the expense of some oil pressure, according to Tyger. “We follow the 10 lbs. per 1,000 rpm as a safe guideline. Additionally, if several runs are made back-to-back, it is possible for a 35-lb. oil pressure light to “flicker” when staging the car or at low engine speed situations. Again the 10 lbs. per 1,000 rpm guideline applies. If a racer is uncomfortable with the oil light coming on (and many are), we switch to heavier oil, but caution them that proper oil warm-up is critical. Installing an oil temp gauge or using an infrared temp gun to monitor oil temperature is a must. We feel that the oil should be above 100 F before a racing load is put on the engine.”

Since LS engines do not have priority main oiling systems, it is a typical upgrade found on aftermarket blocks. Priority main oiling ensures that oil goes to the main bearings before the top of the engine to minimize the effects of an oil pressure drop. For most street use, priority main oiling is less critical because the engine is not going to rev that high (very often). Traditional methods are not as effective to overcome some of the common LS oiling issues. The skirted blocks may add strength, but it doesn’t help reduce windage through crank scrapers and windage trays.

The cornerstone of any lubrication system is the engine’s demand for oil, says Mike Osterhaus, vp aftermarket products, Melling Engine Parts. He told us last year in our article on oil starvation that the engine’s highest specific rate of demand (gallons per engine revolution) is at hot idle. “The oil pump must be sized to supply adequate flow at hot idle, and the engine provides resistance to that flow, which results in oil pressure. Resistance is affected by temperature, and as it increases, the internal clearances grow, and the viscosity of the oil is reduced. Both of these effects reduce resistance, thereby increasing the engine’s demand for oil.”

One of LS engines’ issues is oil starvation due to the oil pan and pickup tube design, says Osterhaus. “The original LS7 oil pan design allowed the end of the pickup tube to be exposed during high-speed cornering, causing oil starvation. Aftermarket oil pans have corrected the issue.”

Verne Schumann of Schumann’s Sales & Service says that you’ve got a couple of inherent problems with the LS engine. It may be better optimized for fuel mileage than for performance, but as far as the oil pump’s functionality, he says it ends up being detrimental to the cause.

Schumann says because GM made the hood in many applications as low as possible for fuel economy, LS engines needed to use a very long pickup tube. “The oil pump is mounted as high up in the engine as possible, up by the camshaft, which makes the pumps do things they don’t like to do.”

According to Schumann, the LS oil pump is the first time in his history (and he’s been doing this since 1956) where GM has designed an OE oil pump. “Most oil pumps have cup valve systems. These cycle back and forth every three to five seconds, unless you’re on the interstate in cruise control. And then that valve will find a place that it likes and float there. The LS pump is unique because the bypass oil from the cup valve has a built-in direct channel that dumps oil into the O-ring port of the pickup tube. You end up doing that for street use because the oil warms up faster on cold mornings because you re-circulated the oil. Additionally, you’ll end up with an enhancement ‘in theory’ of idle pressure. But as we know, the LS engine doesn’t have a good history of idle pressure.”

Since the engine builder can assemble the engine on the ‘loose’ side (larger bearing and internal clearances) with oil pressure on the low side (40 psi @ 7,000 rpm is on the low side for a racing/high output engine), PennGrade1’s Ken Tyger says going from a 15w40 to a 10w30 is not a good idea. “Dropping a full viscosity grade in an engine like this would most likely result in even lower oil pressure, and the oil film strength on the internal engine parts is going to be less as well. Couple that with the torque loading of dyno testing, and the builder could find himself picking the engine up in pieces.”

If the intention is to try to use a somewhat lighter viscosity oil to gain some horsepower, Tyger says the risk of engine damage more than offsets the “marginal” gain in hp that could be realized with a lighter oil. “Even going to a 10w40 rather than a 15w40 is not, in our opinion, a good choice. The lighter base oils in the 10w40 won’t offer as much engine protection/film strength as the heavier components in the 15w40 and moving to the slightly lower viscosity 10w40 won’t give a noticeable gain in hp. Moving the needs of the engine are dictated by design and the actual bearing clearances, anticipated ambient temperature operation and/or engine builder recommendations.”

Automobile engine designs changed very rapidly from the late ‘60s and on (with more focus on emissions), which Tyger says required a higher-quality engine oil. “Some of the changes that had to be made to gasoline-engine oils to satisfy the requirements of the higher API categories were higher detergency, better antiwear protection, improved rust and corrosion prevention, and better control of oil oxidation.”

Until the advent of the first ILSAC grade, GF-1 (in 1996), which was directly associated with API Service ‘SH’ quality oils, there was no limitation or monitoring of engine oils’ phosphorous content, Tyger notes. “However, since the API ‘SH’ category SAE 5w30 and 10w30 (the only two viscosity grades included in the phosphorous limitation) engine oils meeting ILSAC GF-1 had a ‘maximum’ phosphorous concentration limit of 1,200 ppm (0.12% wt), one can reasonably assume that engine oils prior to 1996 contained at least 1,200 ppm and possible more phosphorous (and therefore also Zn).”

As we all have learned (some the hard way), increased P and Zn concentrations in engine oils provide increased antiwear protection. “With an emphasis on improved fuel economy and emissions, modern engine oils have seen a drastic reduction in this antiwear chemistry,” Tyger explains. “Modern engine oils were designed with a different agenda in mind – although ideally suited for the needs of a modern engine (i.e., LS engines), this does not translate into the most appropriate lubricant for a high-performance/classic engine where higher levels of antiwear are needed.”

Schumann noted that electronically controlled oil pumps found on some LS/LT applications do not enhance pressure for quick rpm bursts. “These pumps suppress quick rpm as part of the factory warranty enhancement desires,” he says. Some companies are offering delete kits, but he says no one has it quite figured out yet.

“We’ve deactivated the electronic override on about 30 pumps for specific customers. What happens is the ability of the quick rpm being sensed by the oil pump pressure spike is fed back to the factory motherboard and tones down the engine advancement of rpm. The ECU de-tunes it for you automatically. You can override some of that by deactivating it.”

Other areas of the LS engine that may need attention for oil control include making sure the o-ring on the pickup tube is replaced and fits snugly. Upgrading to redesigned LS7 lifters, if you’re using a stock valvetrain, or upgrading the bearing roller ends with a snap ring. Replace the bypass barbell in the block with a billet barbell for durability. It is also recommended that the oil pan is replaced with one for your customer’s application with the appropriate capacity and baffles to keep the pickup enclosed with oil.

While an expensive dry-sump system is ideal for dealing with LS oiling issues, it is not for everyone. You can make a wet sump system work well for many applications with a few simple changes to tailor your build for your specific purpose. LS engines are the new SBC and will be around for a long time because of the millions of engines out there for a relatively inexpensive cost.

Engine: Tool Talk: You Have Boxes Full Of Precious Metals

Five Spark Plug Service And Replacement Tips
Connect with us