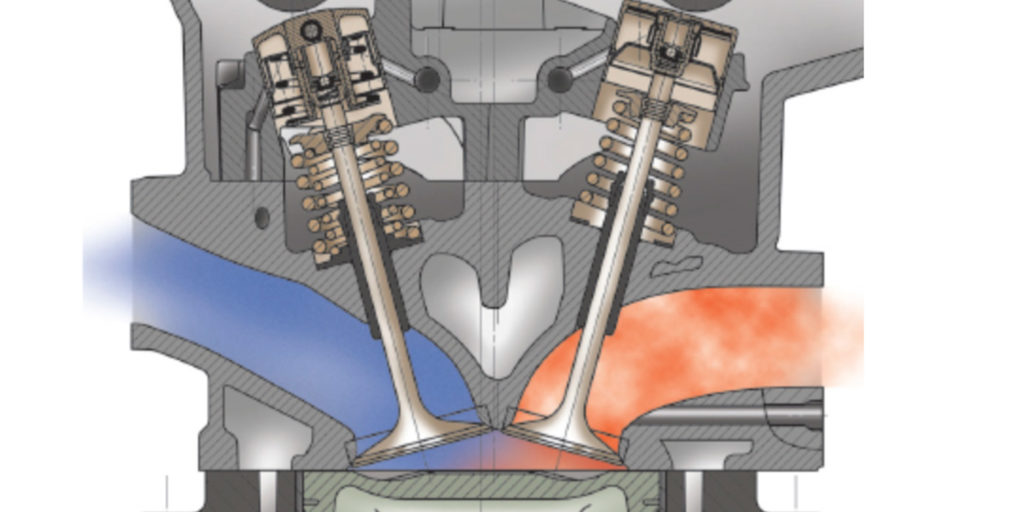 How To Apply Diagnostic Logic To Engine Inputs And Outputs

Diagnosing misfires and emission problems is getting more difficult. Understanding what is going on inside the combustion chamber and what comes out through the exhaust valve is critical to solving any emissions or drivability problem.

Sometimes you must understand what has happened and what will happen when the spark plug ignites the fuel. When you step back from under the hood, you might realize that the sensors and software are chasing the perfect combustion event.

The internal combustion engine will never be perfect, but we are getting very close. Over the past 25 years, engines have advanced not only in terms of emissions but power. Modern engines have leaner combustion events that would have destroyed engines made less than a decade ago. These cylinder pressures were made possible not with forged pistons or exotic materials but by moving the fuel injector port into the cylinder and perfecting the combustion event.

Just consider this: Some naturally aspirated engines have a 12:1 compression ratio. These are four-cylinder engines in everyday cars. In 1964, the 426 Chrysler HEMI had only a 10.25:1 compression ratio. A 1960s engine builder could build a HEMI with a 12:1 compression ratio engine. Still, it would be a slave to “race gas,” and could destroy its self engine in a heartbeat if it ran too lean or rich. In a modern engine, 12:1 can be achieved with pump gas and cast pistons, all while having very low emissions and an 80,000-mile or more emissions warranty.

So what has changed? Engineers know more about what happens inside the combustion chamber than ever before, thanks to high-speed cameras and computer models. Also, the computing speed of microprocessors is a lot faster than 15 years ago. The module can make changes to the spark and fuel faster while processing more sensor inputs than ever before. This evolution has made for the almost perfect combustion event.

The perfect internal combustion engine would put the exact amount of fuel and air into the combustion chamber. The spark kernel would reach its peak when the mixture was properly stirred up, and the piston was in the right position. The flame front would spread evenly.

If the perfect combustion event happened, you would get nothing more than water and carbon dioxide as  byproducts. There would not be any unburned fuel or oxygen. It would also occur at the right temperature, so oxides (“hyperactive” oxygen turned on by higher temperatures) would not combine with nitrogen and carbon to form nitric oxides (NOx) and carbon monoxide (CO). This perfect car would not need any emission-control device.

We are not there yet. In the meantime, we have exhaust gas recirculation systems (EGR), secondary air injection and catalytic converters.

Coils have changed. On distributor systems, the spark had to make a jump from the cap and rotor. How and when it jumped could change due to the condition of the contacts. Modern ignition systems use individual coils. Instead of the timed with a cap and rotor, the coil is controlled digitally. This opens up a lot of options for timing and multiple sparks.

EGR systems put a small amount of inert gas into the combustion chamber to control the temperatures. Since exhaust gases do not typically burn, this lowers the combustion temperature and reduces NOx emissions from the engine.

When things heat up in the combustion chamber to temperatures around 1,300° C or 2,500° F, oxygen and nitrogen combining with each other and form NOx and CO.  By putting exhaust gases into the chamber, the air/fuel mixture is watered down by the inert  gases. This slows the combustion process and lowers combustion temperatures to levels where NOx does not form.

Vehicles with variable valve timing on both exhaust and intake camshafts can adjust the timing so that a small amount of exhaust gas is sucked back into the chamber during the intake stroke through the exhaust valves. This is done by actuating the timing of the camshafts. Modern engines have been able to advance and retard camshafts faster, and the actuators have a greater degree of rotation.

The problem with the perfect combustion event is that it has to occur over a wide range of engine and air temperatures. Engines  still has a difficult time starting and controlling emissions under cold starts.

Secondary air injection systems pump outside air into the exhaust stream so unburned fuel can be burned. Early systems had a belt-driven air pump. The latest systems use an electric motor.

If an engine was able to achieve the perfect combustion event, you would not need a catalytic convertor. But, until this happens, these expensive emissions devices are mandatory. Under ideal conditions, a three-way catalyst can reduce somewhere between 50% and 95% of NOx emissions and 99.9% of the unburned fuel. It is the last stop for pollutants, and if an emissions system’s upstream sensors are compromised, it can only compensate so much before tailpipe emissions increase.

Modern engines are able to operate on the ragged edge between detonation and ultimate fuel efficiency because they are able to sense, control and adapt. The sensing part means that there are more sensors on the vehicle like upstream and downstream oxygen sensors. These sensors are more sensitive and can show a lot more resolution. Also, the modules processing the information can use the information quickly for fuel trims, spark curves and valve timing.

Controlling the combustion event has become easier with variable valve timing, electronic ignition and direct injection. These technologies ensure the correct air/fuel mixture is in the combustion chamber and ignited at the optimal time to achieve the most efficient and powerful combustion event.

The diagnostic “crutches” of swapping parts like spark plug wires, sensors and other components will not typically work, and the customer will lose faith in you long before you get a second try. Gathering and analyzing data from the vehicle and service publications has a lot more value than going off hunches.