MAHLE Clevite recently announced the winner of its Champion Technician Contest that was held in October. After receiving many impressive nominations they announced Dave Arce as the winner during NASCAR Champion’s Week in Las Vegas.

Dave is the owner of Arce Engines in El Cajon, CA. He remanufactures engines, performs general installation and repair, does engine rebalancing and has quite a resume when it comes to high performance racing engines. 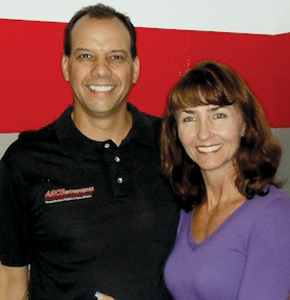 Dave’s daughter Hollee nominated him for the contest and wrote an excellent essay about all of her dad’s accomplishments throughout his career.

Arce won a trip to Las Vegas Nov. 30 to Dec. 3, 2011, that included a special meet-and-greet with Doug Yates from Roush Yates Engines, a VIP Dinner to celebrate the MAHLE Clevite Engine Builder of the Year, two tickets to NASCAR Victory Lap and NASCAR After The Lap, as well as tickets to the NASCAR Sprint Cup Series Awards Ceremony.

The following comes from an interview with Suzi, MAHLE Clevite’s Under the Hood social media personality:

What first sparked your interest to work on cars?

That was quite a long time ago. I was 16 and I needed transportation. My older sister had this old raggedy 1963 Chevy truck, and that’s where my first valve job came from. It wasn’t running well so I pulled the cylinder heads off and I took them to school because we had an automotive class at our high school and I did a valve job to get it running. The funny thing is I wasn’t even in the automotive class. I was specializing in electronics. By the time I graduated from high school I had 970 hours of electronics training. So I actually wound up going into the electronics industry and I was just doing automotive stuff as a hobby.

What do you like most about being in the engine business?

I like the variety. We’ve built a lot of Chevy 350s, Ford 302s and a lot of the generic stuff that used to be a dime a dozen. Machining is my favorite thing to do, though. We have an in-house machine shop so we do all of our machining, assembly and installation right here.

Most people in this business for any length of time have their wish list, or bucket list as we call it today. For instance, Bill McKnight who works with me wants to attend the March Meet before he retires. What’s on your list?

Since I started my business, I’ve always been associated with racing and specifically NASCAR. We actually had a track here right in El Cajon, which is gone now. I always hoped to be involved or get close to the circle track or NASCAR racing somehow, someway. Part of how I did this over my history of owning this business is by attending races and working with my suppliers to go out to the races in Phoenix and go into the back garage area. I’ve already done a lot here in San Diego with racing and I’ve built race engines for guys in Los Angeles. We also go to Vegas and race – we’ve won a lot of races there too.

What I’m getting from MAHLE Clevite is just what I was looking for to make that next step in my business and hopefully I’ll be able to make new contacts, meet new people and make new friends in the racing world.

MAHLE Clevite is of course, in the parts business. What do you look for in a parts supplier?

The biggest thing is availability – it’s having the stuff that can get here that day or the next day which MAHLE Clevite fulfills; no question about the quality at all. There are a couple of big players, who are MAHLE Clevite’s competitors that are falling down now. Availability and quality is what I look for most.

What advice would you give a young person starting out in the engine business today?

Do you see any trends in the industry and would there be any significant changes you’d have to make to keep up with these trends?

People are very tight right now with their money because of the economy. So I’m hoping that we recover in the engine building industry where people are not buying so many new cars and people will be buying used or repowering their vehicle. This is the biggest trend that I’m hoping I see come through. I’m staying stable to stay geared up for that. The reason is because the people who bought the $20,000 – $35,000 vehicles or trucks are not going to want to throw that away. So if the vehicle or surroundings around the engine are in any kind of shape and it has about 150,000 or 200,000 miles, we’re hoping they’ll want to repower the thing. The engine’s got to come out, get torn apart and rebuilt. So I’m hoping people will avoid getting a new vehicle.

Is there anyone in the engine building/automotive business that you idolize or look up to as an inspiration?

There are a few. I’d have to say a few smaller companies who had a similar start like I did. For example, Dart who makes new blocks and cylinder heads and another one would be ARP. Those companies came along very well and have very high quality products. I just want to have a really nice shop that does good quality work and supplies a good product which is good for me. Dart and ARP started small with just one or two guys and then became what they are today which is my goal.

What was the most difficult project that you worked on? Was it a success?

Probably the most unique project was when a lady came in here that worked for an electronics company and she was asked by her boss to find somebody that could use their electronic components. The electronic component was an ultra-capacitor. They wanted to install it into a used vehicle that they purchased and utilize it as a power source. The vehicle was called the Maxwell Technologies Demonstration Vehicle. These ultra-capacitors are stored energy that can be tapped into and utilized to power stuff.

They had three demonstrations that were in this vehicle: one for starting the vehicle, one for the stereo, and one for power steering. They used the ultra-capacitor on the stereo when a lot of power was being drawn and it was used to back it up so the volume and sound would not die off. The ultra-capacitor helped the power steering because if there was a loss of voltage, it would draw power to it.

We took the project on and adapted these into the car. It’s kind of a first stepping stone to the next wave of vehicles. It’s very big in Europe right now. They utilize them in buses. Not necessarily 100% but they provide a surge of power when it’s needed.

Another big project of mine was in racing. With the way technology is today, people are coming up with several different ways to make engines perform. I race in the Lucas Oil Modified Series and I was challenged by one of the top drivers, Jim Mardis. Jim is a very good driver but didn’t have the powerplant that he needed, so he asked me to build him an engine that would supply legal power where he could make a good run at the championship.

We put the package together, worked on it and manipulated it and finally we figured out the best power for the money and to stay legal. He just finished winning his second championship with the new power plant. Jim had my power plants in the series last year and this year and it’s the first time since the series has been running that someone has won back to back.

Do you have any goals in the next 5-10 years for your personal career or your business?

What has kept us alive over the last 5-8 years is diversifying. I haven’t just stayed with the same thing since I started which was engine machining and building engines. I have added general repair and installation to my business and we also bought out another company, San Diego Engine Balancing, who was balancing our engines for us. So I guess my answer is I’m looking for other things that are automotive related that make us a little more diversified like the ultra-capacitor project. Taking on special projects and implementing them for larger companies is what I see us doing more of in the future.