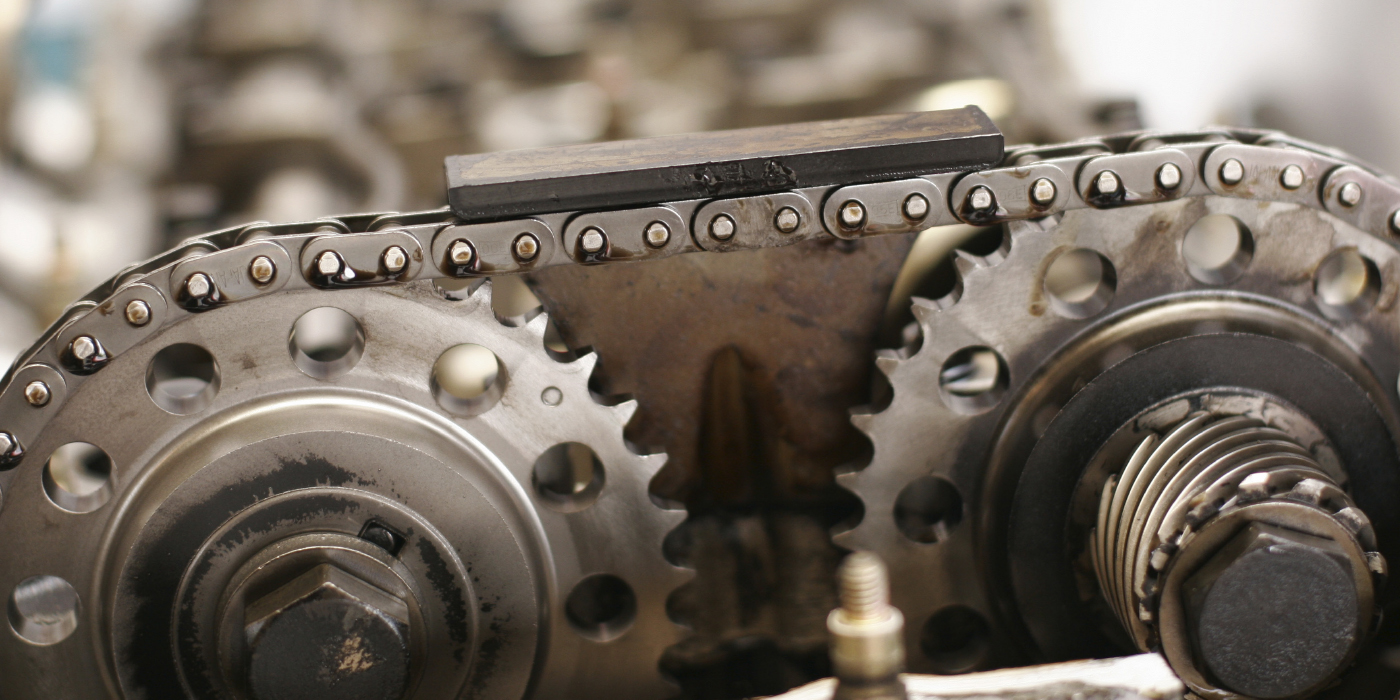 Following the completion of a successful timing chain system repair, the best thing you can do for your customers’ new timing system and engine is to maintain it with clean, high-quality oil. Clean and sufficient oil is the key to getting maximum life from the timing system. Premature component or complete system failure can often be traced to oiling issues. And, a contaminated oil supply is a common reason for premature system failure.

Of course, we do not always see a healthy environment. In one failure instance, the timing components were covered in oil debris and deposits, which is detrimental to the timing system. Dirt and gunk will lodge between chain links and pins not only fatigue the chain, but also wear the nylon pads on the guides and tensioners. The debris gets between the chain and sprocket teeth which wears them prematurely. Most important, though, is that debris will clog oil ports.

The two most at-risk components are the hydraulic tensioners and VVT cam phasers – both highly dependent on the oil supply. Oil debris can clog the ports that supply oil which can lead to instability in the timing system which can result in premature failures. Oil ports are sometimes no larger than the end of a ballpoint pen. Debris found in dirty oil can clog those oil ports, leaving the tensioner unable to apply pressure to the timing chain resulting in too much slack (chain whip), or timing system instability. If you are lucky, you will hear the rattle and get it repaired before it jumps a tooth and causes real damage.

When looking at the VVT cam phasers (also known as actuators), that same oil debris will clog oil passages that feed the phasers that control timing. Without the right amount oil in the chambers, the phaser will not phase properly and could lead to erratic timing and phaser instability. This instability will cause chain whip which will damage the tensioners and guides and could ultimately result in system failure.

For example, two oiling issues the Cloyes engineering team has experienced with engines currently on the road are the General Motors (GM) High Feature V6 (HFV6) and the Ford 5.4-liter modular V8. For the GM HFV6, timing failures led to GM issuing a bulletin on reduced oil change intervals. And, with the Ford V8, as the engine ages, reduced oil flow to the cam phasers will impact the timing system.

Let’s look first at the HFV6, which is included in many popular GM vehicles such as the GMC Acadia, Chevrolet Malibu, Chevrolet Traverse, and others. The engine is designed with three hydraulic tensioners as well as four VVT cam phaser and solenoid units, all of which are highly dependent on oil. We have seen many failures due to contaminated oil fatiguing the components and clogging the oil feed ports. Cloyes technical experts will tell everyone they can to not listen to the computer, be proactive, and change oil on a HFV6 engine every 5,000 miles.

Consider the Ford Modular V8 that  is used in the Ford Expedition as well as the E and F 150, 250, and 350 vans and trucks. This represents many work vehicles that cannot afford downtime. Reduced oil flow to the cam phasers is a known issue with this engine. Timing will be affected if the phasers do not phase. This can certainly be caused by dirty oil clogging the oil ports. Issues can also be attributed to advanced wear of the cams and cam journals. The front cam journal feeds oil to the VVT unit which controls the timing. The Cloyes engineering team improved the design. The OE and other aftermarket phasers use spring-pressured vane or nylon “sweep” which creates unneeded friction and is a common wear and fail point. The Cloyes frictionless design results in 20 percent less internal drag and 10 percent more torque.

To summarize, using the wrong oil is a common symptom that causes a vehicle’s timing chain to wear even quicker. Often, modern vehicles will be able to use only synthetic oil because they must meet certain specifications to ensure the oil flows quickly and with the proper pressure. The wrong oil can cause extra load on the chain and the engine will not be properly lubricated.

Each vehicle manufacturer specifies a minimum API oil service rating, a recommended viscosity and often a specific oil. Improper oil viscosity can also have a serious impact on timing chain tensioner operation, variable valve timing solenoids and actuators, as well as direct injection fuel pump wear. In fact, using a motor oil viscosity other than the factory-recommended oil can result in a check engine light and engine damage.

This article courtesy of Cloyes.

The Importance of Clean, Quality Oil in Timing Chain Systems

Five Spark Plug Service And Replacement Tips
Connect with us