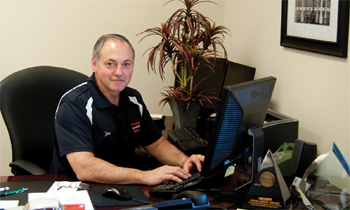 When Joe Marconi finished high school, he did what most recent graduates do: He enrolled in college on the advice of his guidance counselor. But he quickly found out that route to higher education wasn’t for him.

“I was working at a gas station at the time, and I just felt like I didn’t belong in college,” Marconi says. “During the summer in between my second and third semesters, I became very friendly with the mechanics in the shop — this is toward the end of the Muscle Car era, the mid ’70s. A lot of guys had their muscle cars, their GTOs, their Super Sport Impalas and their Malibus. I was going to the track; I was helping them work on their cars. They were older guys. I was 19, and they were in their late 20s.

“When I went back to school, I felt like I was still in high school,” he continues. “One day I just left. I quit school in the middle of a ­Spanish class.”

But that wasn’t the end of learning for Marconi; far from it. The owner of the garage he was working at encouraged him to keep learning to be the best in his profession.

“He was like a mentor to me,” he says. “He took me to lunch, and he started talking about events that happened in his life. He said, ‘You can do anything you want in life. Education doesn’t have to be limited to college. It can be reading and studying on your own. It took off from there.”

Marconi worked at that gas station for a year until, sadly, the owner passed away at only 50. He worked at a few other gas stations, and, eventually, got a job at a dealership, but he wasn’t happy there either.

Marconi told himself that by the age of 25, he was going to do this on his own, he left the dealership, never looked back and has been on his own for more than 30 years.

Marconi started Osceola Garage in Baldwin Place, NY, with four bays, but quickly ­expanded to five bays, then six. A large waiting area was added as well, but he says they outgrew the facility. With property available next door, Marconi made the decision to subscribe to a different model, one that has worked well over the years.

“I had this idea that I could build a little bit different business model,” he explains. “My original facility would be for general repair — engines, transmissions, clutches. My new facility, which is a four-bay facility, concentrates more on tires, alignments, maintenance work and oil changes — ­primarily for people who want to wait for their service. So I’ve got two different businesses in the same location, and it works. It’s a total of 10 bays, and we’re actually going to put on an eleventh bay. And, then I’m actually looking at property about a half hour away to open up another location.”

Shop appearance has always been a top priority for Marconi, something he says is paramount to success in the automotive repair business.

“I’ve had some of the same customers since the first day I opened up the door,” he says. “It’s not about price, it’s not about fancy equipment — they don’t even realize what you do in the back of the shop. It’s about being nice; it’s about always saying yes. It’s about the look of your facility; it’s about the look of your bathrooms. It’s how you treat people; it’s about building relationships. Always put people before profit. Always build relationships. The rest will take care of itself.”

As a result, Marconi says Osceola Garage looks more like a professional building than a repair shop, with an attractive façade that faces the street. The customer service area also has the appearance of a professional ­office, and even the bathrooms are decorated like in someone’s home, with cleanliness a top priority.

The Golden Rule
“People will judge you more on the look of the facility, and how they are treated, than by what happens in the bays,” he says. “The quality of your work is a given; people expect that. What sets you apart is the customer experience.”

To that end, Marconi tells his service advisors to treat customers as they would a friend or family member; rather than trying to sell, sell, sell, find out how they are, treat them right and let them know what they really need.

“If your best friend came through the door, what would you say first? Would you say we have a sale on shocks today? No, you’d say, ‘Hey, how are you doing? How have you been? How’s the family doing? What’s new in your life?’ Would you actually sell him something? No, if your brother needed brakes, you would just tell him, ‘By the way Tommy, you need brakes.’

“That’s how we attract and retain customers,” he continues. “People know us from our culture. Word-of-mouth is good, too. Every good ­customer who really likes you will bring in seven to 10 more. If they don’t like you, they’ll tell 700 ­people about you.”

Believing that customers should be treated as family has evolved into an annual Customer Appreciation Day, a barbecue where small gifts are given away and large items are raffled off. Car clinics are also popular with customers, who leave better educated about preventive maintenance.

That focus on education also ­applies to the technicians and service advisors who work at Osceola Garage; training is mandatory.

“We have a total of seven technicians, and they’re all ASE-certified,” he says. “I also hold a lot of in-house clinics, and I may even hold classes on basic things like charging systems, anti-lock brakes. We also bring in CARQUEST trainers to do training here, and we enroll in the CARQUEST Technical Institute, where we take four to six classes a year.”

Team Approach
Marconi has also determined how to improve shop productivity, from customer write-up to car delivery, and he’s found a team approach involving all employees has resulted in ­increased efficiency.

“I have done a lot of research on Six Sigma and the Japanese style of Lean Management,” he explains. “To improve productivity involves identifying the defects in your workflow process. Once you identify a defect, you need to find a way to correct it. It could be as simple as changing the layout of your shop or making sure that ­equipment and supplies are within reach of the techs. Little by little, each improvement makes the shop more efficient, which will ultimately increase productivity. We also hold team meetings each month to get ideas collectively to improve our workflow process. A team effort is always better than the boss dictating policy.”

It’s that team approach and a family atmosphere that has helped Marconi attract and ­retain employees throughout the years.

“I’ve learned that employees leave a company mainly ­because they are not happy,” he says. “It may be because of money, in some cases, but employees are people, and people want to feel appreciated and respected in their workplace. If the culture of your company promotes a friendly, family ­atmosphere, your employees will find it hard to leave.”

And, as a business owner, Marconi says being successful means being an example of what you expect from your employees — without “ruling with an iron fist.”

“Be the leader of your company,” he says. “Be the one to make strong positive decisions. Be the one people want to ­follow; not because you’re ­demanding, but because they want to follow you. If you have people who come in late, who don’t want to be there, look at yourself first: What are you doing? You’d be surprised that some of the problems are not the people around you; it’s you.”

Marconi says he owes much of his business philosophy to management training from Elite Worldwide and Bob Cooper. Having joined in the late ’90s, he says Cooper helped form the code of ethics he runs his business by today. In fact, it helped so much that Marconi now works with Elite as a business coach and has his own group of shop owners that he helps train to run more efficient and profitable businesses.

Marconi also attributes his success to industry and community involvement, serving on several boards and belonging to various community groups in his area, including the TechNet Council, the Car Care Professional Network and the Putnam County Business Alliance.

“I’m also part of the local dealer ­association for the Westchester-Putnam area, and I serve as an advisory board member for the local trade high school,” he says. “You want to be a focal point in your community. People get to know you; it’s a key factor.”

Leveraging Technology
Also critical to success today is a shop website that not only grabs the attention of would-be customers, but also gives them a snapshot of the services provided, industry certifications and pricing. Marconi says he works hard at search engine optimization to ­ensure his shop comes up first in web searches.

“People today live in a different world,” he explains. “They know they can go online and look at your website, services that you perform, years in business, location, etc.

“A nice presence on the Web means a lot, particularly to the younger generation,” he continues. “No one goes to the Yellow Pages anymore; they just Google “auto repair in Putnam County.”

To that end, he also started www.AutoShopOwner.com a few years ago as an online business forum for automotive shop owners.

“The forum discusses business issues,” he says, “and we have a blog and various downloads to help shop owners. I started the site because I felt that shop owners could benefit from sharing and exchanging ideas and opinions. We have great posts, tips and ­discussions pertaining to the automotive repair and service business.”

It’s that kind of forward thinking, keeping up with trends both in marketing and in new technology, that have contributed to the longevity of Osceola Garage. Marconi says planning ahead has served him well, and he coaches other shop owners to do the same.

“A shop owner must be a thinker,” he says. “By that, I mean you need to have vision and know where you want to be in the next year, in five years, in 50 years. You must commit yourself to continuous growth and continuous self-improvement. Never settle for being average. It takes a lot more work to be above average, but the rewards are much greater.

“Don’t be afraid of taking chances and never hesitate with a decision out of fear of failure,” he concludes. “We sometimes learn more with one mistake than by doing a bunch of things right. If things don’t work out, don’t let it discourage you. You have just learned valuable information. Try again and again, and eventually you will succeed.”