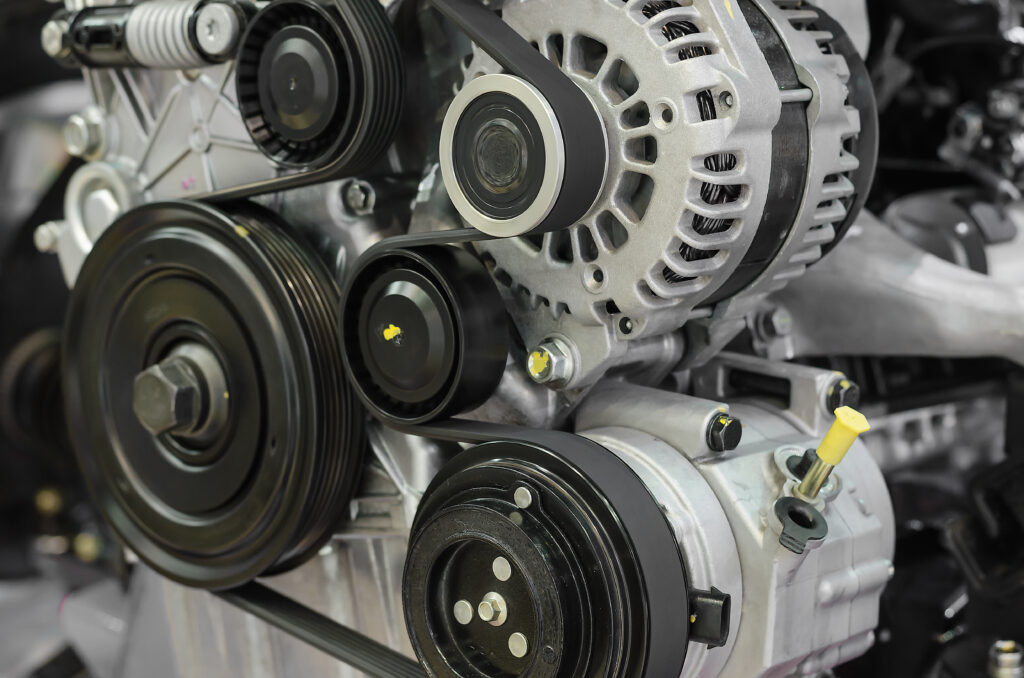 No internal combustion engine has a constant crankshaft speed. An engine slows down as the piston compresses the air and fuel mixture, and speeds up as the mixture is ignited. You can’t see it with the naked eye but the small, sudden changes in speed can cause slipping, noise and unwanted movement in the belt. So, what is an engineer or technician to do?

The first option to control noise is to increase the tension of the belt. When the amount of tension is raised on the belt with either a manual adjuster or automatic tensioner, it can do three things to the belt. First, it makes the belt drive system less efficient because it takes more power to drive the components. Second, as belt tension increases, the wear on the belt can increase. Third, higher tension levels put more stress on the bearings in the alternator, power steering pump and idler pulleys. For engineers, belt tension is a balancing act between noise, efficiency and longevity of the belt.

There are other engineering options to achieve that balance without increasing tension on the belt. Harmonic balancers on the crankshaft can dampen crankshaft speed changes at the source. Alternator decoupler pulleys can decouple the alternator from the drive belt system, and some can even dampen vibration. In addition, new automatic belt tensioners have dampening components that can keep the tension constant.

Many late-model vehicles are equipped with special pulleys that are engineered to reduce noise, vibration, and harshness and extend the life of the alternator.

An Overrunning Alternator Pulley (OAP) has a one-way clutch mechanism inside the hub that allows the belt to turn the alternator in one direction, and allows the alternator to “freewheel” and spin at its own speed when the engine suddenly decelerates.

A good OAP pulley should lock up and turn the alternator rotor when it is turned one way, but release and freewheel when it is spun in the opposite direction. If the internal clutch mechanism is bad, the pulley may slip and fail to drive the alternator, or it may remain locked all the time — increasing noise, vibration and stress on the belt drive system.

Another type of special pulley is an Overrunning Alternator Decoupler (OAD). This type of pulley also has a one-way overrunning clutch inside the hub, as well as an internal torsion spring to further dampen vibrations in the belt drive system. The spring acts as a shock absorber to cushion the hub. This reduces noise at idle and low engine speeds and helps dampen harmonic vibrations at higher speeds.

• Raise engine speed to 2,000-2,500 rpm in Park (auto trans) or Neutral (manual trans) and then shut off the engine. Listen for any noises from the OAD after the engine is shut off. A worn-out bearing will generate a “buzz” noise during this test. If the OAD is noisy during this test,
replace it.

• Remove the cap, and with the proper tool inserted into the front of the OAP, rotate the alternator’s shaft in both directions. In the overrun direction it should feel smooth, and in the drive direction, it should have a spring feel.