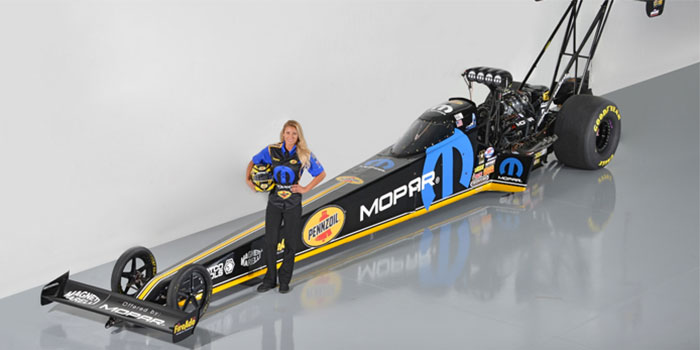 Mopar and Pennzoil announced the sponsorship of the NHRA Top Fuel Dragster driven by Leah Pritchett. Don Schumacher Racing (DSR) driver Pritchett will compete at select events in 2016 and debuted the blue Omega M on her dragster at the 37th annual Mopar Mile-High NHRA Nationals, which took place on July 22-24 at Bandimere Speedway near Denver.

“We are extremely excited to team up with our partners at Pennzoil in our return to competition in the Top Fuel class,” said Pietro Gorlier, head of parts and service (Mopar), FCA – Global. “A key part of Mopar’s DNA has always been going fast at the track. We welcome Leah Pritchett to the Mopar team and will cheer her on as she drives us forward in Top Fuel.”

The association with Pennzoil extends an already robust global business relationship between the two brands. Shell supplies bulk and packaged oil and transmission fluids for Mopar in the United States, Canada, Mexico and many additional countries throughout the world, and Pennzoil is the approved factory-fill for Chrysler, Dodge, Jeep and Ram vehicles. Pennzoil is also a major associate sponsor on Hagan’s Mopar Express Lane Dodge Charger R/T Funny Car.

“Pennzoil has not only a long and storied history as a supporter of motorsports, but specifically an impressive sponsorship of a roster of amazing drag racers, including legends like Don Prudhomme and Eddie Hill,” said Jesse Campos, director of OEM Marketing, Shell Lubricants. “The partnership with Don Schumacher Racing provides Pennzoil with the ability to test existing and new motor oil technology developed by Pennzoil’s industry-leading scientists in order to gain insights from the track and to aid in the production of innovative lubricants for consumer vehicles in the future. This is coupled with the growth of the NHRA audience on FOX Sports 1 and the timing of Leah’s relationship with Pennzoil to begin at Denver, which will feature the first live network coverage of NHRA on FOX and mark the first time an NHRA event ever will be broadcast live on one of the four major networks. We are honored to have Leah carry our brand forward with DSR and Mopar for 2016.”

Pritchett, 28, captured her first career Top Fuel victory earlier this season and advanced to the semifinals at the recent Route 66 NHRA Nationals. The DSR star takes her seat in the HEMI-powered Mopar/Pennzoil Top Fuel dragster currently positioned in the top 10 of the points standings. Mopar will act as her primary sponsor for select 2016 events, including the NHRA Denver, Sonoma and Reading stops.

“Shooting for the moon is what we do, and now to have two great global corporations like Mopar and Pennzoil get behind me is all I can ask, along with driving for Don Schumacher Racing, the most successful organization in drag racing,” said Pritchett. “This has been my goal for several years, and it means absolutely everything to me. I’m very proud to represent the Mopar brand in its return to Top Fuel.

“I’m also grateful for the support that Quaker State provided me earlier this year. They stuck by me throughout this transition and never wavered in their support of my racing career. We have all the parts, pieces and partners in place, and now that I’ve made the switch to Pennzoil, it’s time to hit the ‘go’ button.”