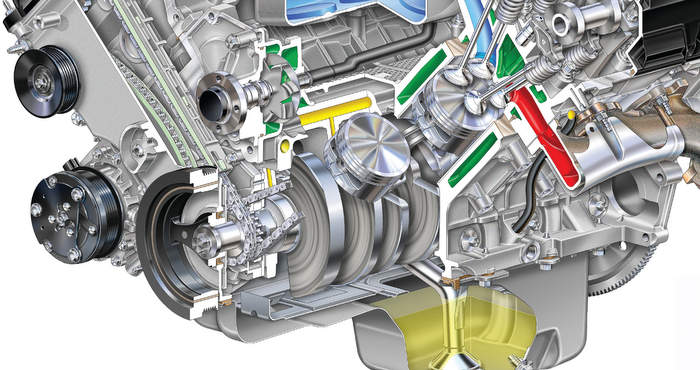 Every time a cylinder fires, the crankshaft speeds up a very small amount for a short period of time. It is then slowed down as the next cylinder in the firing order compresses air and fuel for the next combustion event.

The speeding up and slowing down of the crankshaft produces torsional vibration or twisting force, which can put stress on the crankshaft and the connected components. If the stress is great enough, the crankshaft will eventually fail.

Adding mass to the crankshaft assembly is one solution for minimizing vibrations in some engines, but this approach increases rotating mass of the crank and overall weight of the vehicle. The other cure is a crankshaft pulley with a harmonic dampener/balancer.

A harmonic balancer is like a punching bag for the crankshaft. There are two basic components in a harmonic balancer: inertial mass and an energy-dissipating element. The inertial mass consists of an outer ring that could have the grooves for the belts and an inner hub that connects to the crankshaft. The outer ring contains the mass to cancel out the vibrational forces.

On the surface, a harmonic dampener may seem simple, but tuning the unit to an engine over a specific range of rpms is complicated engineering.

2. Worn edges on the belt
The outer ring can move so much that the grooves are no longer aligned with the rest of the accessories’ pulleys. The pulley grooves may have uneven wear or polishing.

4. Transmission damage
If a dampener is no longer able to absorb crankshaft vibration, the destructive forces will start to attack the transmission. The vibrations could damage the input shaft, bearings, planetary gears and more. On some vehicles with large displacement engines and manual transmissions, even the gears in the differential can be damaged.

5. Alternator or power steering pump failure
A belt tensioner or decoupler pulley can take only so much vibration before the bearings inside are damaged. While the dampener may only flex 1º or 2º, this takes a lot of strain off attached components. 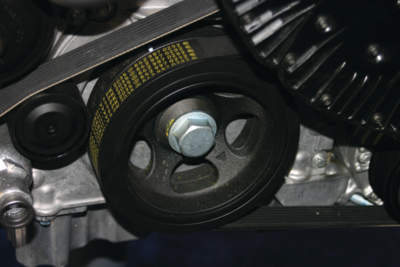 6. The untraceable squeak
A damaged dampener can make a squeak when it rotates, and it will not stop no matter how much belt dressing is applied.

7. Elongation of the dampener keyway
If the keyway shows any sign of damage or play, the crankshaft dampener is damaged.

8. Irregular idle
A dampener is designed to work over a wide variety of engine speeds. Some dampeners are working hardest during idle. If a dampener has failed, the idle may fluctuate as the dampening mass moves around.

9. Excessive belt tensioner movement or “belt slap”
If the dampener is no longer working, the power pulses and vibration will be transferred to the tensioner. This can be seen as flutter in the tensioner arm.

10. The nose of the crank has broken off or the crank has snapped
Here is the scenario: an engine has had catastrophic crankshaft, bearing or connecting rod failure. A new engine has been installed and the old harmonic dampener has been installed. Soon, the new engine fails. This is a sign that the old dampener has failed. Always inspect the old dampener before reinstalling it.

1. Heat
The elastomeric components of the dampener turn vibrations into heat. If the heat can’t be dissipated, the rubber will fail over time. This is why you will see vents in either the wheel well liner or under tray.

2. Cracking
The outer or inner inertial mass rings can crack and cause the ring to separate from the dampener assembly. This is rare, but still a possibility on some vehicles. When this happens, a lot of surrounding components can be seriously damaged, like the radiator.

3. Deterioration of the rubber
The materials inside the dampener will slowly degrade over time due to ozone, flexing and heat. On most vehicles, the dampener will last the life of the vehicle. The rubber of the dampener should not have cracks, bulges or shrinking. 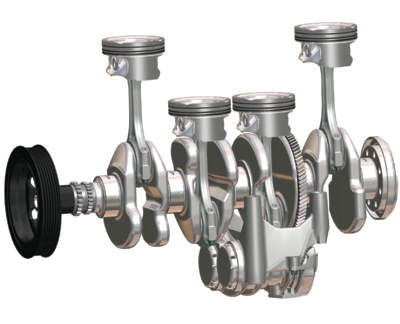 4. Oil leaks
The natural enemy of the harmonic dampener is oil and other fluids. A leaking crankshaft seal can coat the rubber or elastomeric parts of the dampener and cause it to deteriorate. Also, items like leaking valve covers, power steering pumps and A/C compressor oil can cause the rubber to swell, shrink or crack. Fluids can also cause the bond between the metal and rubber to weaken.

5. Installation errors
A dampener should never be hit with a hammer. This could damage the internal components. Always use the correct tools to install a dampener. Not using the correct tools can damage the dampener and the crankshaft. The most common installation error is using the center bolt to press the dampener onto the nose of the crank. Chances are you will strip the threads due to the force required to seat some units.

6. Removal errors
Always use the correct procedure and tools to pull the dampener from the vehicle. To replace the timing belt on most vehicles, the dampener must be removed. The most important thing to remember is to never put pressure on the outer ring or try to persuade it with a hammer.

7. Engine troubles
It is possible for a dampener to be damaged by an engine that is misfiring because the forces at the crank have changed. But the problem could be that a mechanism such as a misbehaving balance shaft or an item on the rotating assembly has failed.

8. Transmission trouble
The mass of the flywheel, flex plate and/or torque converter are on the other side of the rear main bearing. If these parts are out of specification, they can cause an imbalance in the crankshaft for which the dampener might not be able to compensate. Ask the owner if any transmission work has been performed recently — chances are either the wrong parts were used or they were installed improperly.

9. Wrong belt
A belt that is too tight can cause not only stress on the accessory belt drive items, but also on the harmonic dampener due to the extra tension.

Harmonic Dampeners: Why They Fail, What to Look For