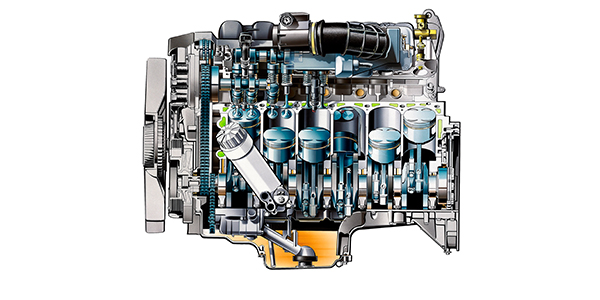 Sometimes the least expensive parts are the most time-consuming to replace. This is the case with crankshaft oil seals.

Sometimes the least expensive parts are the most time-consuming to replace. This is the case with crankshaft oil seals. If a front seal has left a trail of oil for you to ponder, the repair is relatively minimal. But if the rear main seal is no longer doing its duty to keep the oil inside and dirt outside the engine, then you better tighten your belt because you’ll be logging some serious labor hours to replace a part that costs less than a meal at a casual restaurant.

Before assuming the leak is isolated to only the main seal, it is important to check other possible causes and make necessary repairs before replacing the seal alone. An installation error may be to blame if, for example, the seal was installed with the lip out instead of being oriented toward the inside of the engine. Run some fluorescent dye through the oiling system to be sure exactly where the leaks are coming from before you dig in.

There are a few possible causes of main seal leaks that you can confirm without dropping the transmission. What may look like a main seal leak may be from a cover, gasket, oil pan, oil cooler or even rear mounted oil sending unit. Oil that leaks from one of these senders can give the appearance of a rear main seal leak as it drips down the back of the engine.

In older model vehicles, oil seals are two-piece designs. But GM changed the design in the mid-’80s to a one-piece design to reduce the chance of a misassembled seal on the assembly line. Two-piece conversion kits are available in the aftermarket, and many racers use them since they are easier to replace. If installed correctly, seals rarely leak. However, one-piece rubber or silicone seals are found on the majority of the vehicles on the road today. Some of these seals use a Teflon coated lip that transfers some material to the surface to provide lubrication and better sealing. For these types of seals it is best to install dry or a leak will develop if you use any lubricant. Installation of seals should be done with a proper tool that drives the part in evenly and doesn’t destroy the edges. It should be noted that some new seals are supplied with an alignment sleeve.

The positive crankcase ventilation system (PCV) can cause all kinds of trouble if it is not operating correctly. Clogged or broken vacuum lines, torn oil separator diaphragms, can produce carbon buildup and oil blowby that creates higher pressures resulting in oil leaks. For turbocharged and supercharged applications, crankcase pressures may increase exponentially if the PCV system is restricted. Lack of regular maintenance is often the culprit with the PCV because after time oil breaks down and will begin to sludge. The first effects of this usually show up as a misfire due to carbon build up or a clogged vacuum line.

A bent crankshaft will cause a lot more problems than a leaking oil seal, but if there’s even a slight amount of runout or flex due to not enough support from the main bearings, there could be trouble with the oil seals. The lip on the inside of the seal clamps down on the surface of the crank (front and rear) to provide enough force to keep oil from escaping and dirt from entering. Pressure from the crankcase pushes the lip outward against the surface of the flange to prevent leaks.

Some seals have a spring inside the lip to help seal it on the crank. If the lip moves too much or exposes the spring, it can score the crank sealing surface, causing a leak. Look for any burrs or grooves on the front and rear of the crankshaft to make sure it is smooth. Any sharp edges or gouges could damage the lip of the seal, allowing oil, dirt, and debris past. Larger particles can grind on the surface that may require further steps to bring it back to specification. You can use a piece of emery cloth to polish the crankshaft and clean it with carburetor cleaner or something that won’t react to silicone rubber.

If the output flange of the crankshaft is scored and damaged to the point where polishing won’t bring it back to life, some aftermarket companies offer crankshaft sleeves that fit over the flange between the seal and crank surface. Repair sleeves are not only available for the crankshaft sealing surface sleeves, but also for the harmonic balancer seal surface, and camshaft seal surfaces that can be installed with specialized tools to make placement as simple as possible.

Another point to look out for is the pilot bearing. Be sure to inspect the input shaft for misalignment because it can put stress on the crank and eventually lead to a leak and bearing wear. The crankshaft needs to ride on a smooth, flat surface on a thin film of oil. Your customer may need more than an oil seal if the crankshaft has worn the bearings or has low oil pressure. Be sure to check out all the potential causes for a leak before starting into a job this big.