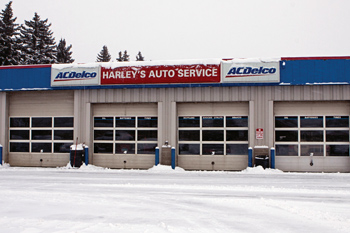 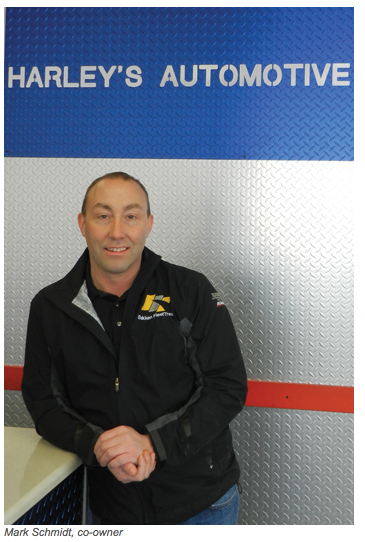 When residents and business owners in the Souris River Valley were told last May that a flood was imminent in the coming weeks as a result of heavy rains and snow runoff, the owners of Harley’s Automotive Center in Minot, ND, sprang into action.

“Our first response was, what do we save, and how do we do it quickly?” remembers Mark Schmidt, who co-owns the shop along with his father, Harley, and sister, Mary Dittus. “As a business, we were faced with decisions we never imagined; whatever we left behind would be lost.”

It was a tough reality for the family-run business, started in 1964 by Harley as a Standard Oil service station, with a gas station, convenience store and car wash, seven-bay automotive center and Bakken FleetTrax commercial service being added along the way. Everything that took years to build could be gone in a matter of days.

While independent by nature, Mark quickly learned the value of friendship and the phrase, “It’s not what you know; it’s who you know.” He says he’s eternally grateful to Ron LaCount, his ­father’s high school friend and the owner of Rolac ­Contracting in Minot.

“We met with Ron and other contractors two days before the expected flood with the proposal of building a dike around our gas station and the shop,” Mark recalls. “Resources were limited and time was running out. We opted to build a dike around the gas station because of all the fixed items that were difficult or impossible to move. We moved quickly to evacuate all inventory, shop equipment, computers, vital records and tools that we could. Employees who were not at risk for flooding stayed to help, and many people from Rolac, friends and volunteers also pitched in to get things to higher ground.”

The dike was finished just before evacuation was mandated on June 23, 2011. Mark says the presence of the National Guard and Black Hawk helicopters made it feel as if they were “preparing for war.” Mark and his family could only watch as televised news footage showed rising waters; the flooding continued for several weeks.

In the meantime, a former neighbor of Mark’s offered him the use of a small, two-bay service station, which allowed Harley’s Automotive Center to continue to conduct some business and keep about half of its 18 employees working. (Besides Mark, Mary and Harley, the shop employs 12 technicians [full- and part-time], two service advisors and an office manager.)

He says the shop’s car rental business also remained strong during that time — fortunately, the 90 vehicles that comprise the fleet were out at the time of the flood. The shop’s “office” was housed in the detached garage of the house Mark is still renting to this day, as well as at Mary’s home. Mark also had calls to the main shop number forwarded to his cell phone.

Stay True to Your Values
In an effort to help rebuild the area, FEMA and local governments began offering financial assistance for flooded businesses and residences. Standing in line for government aid, Mark recalls, was “one of the most depressing things” he’s ever done, though he never gave up hope of re-opening the shop.

“Every day I would get up, put my work clothes on and go to work,” he says of the days during and immediately following the flood. “Everything was different, but it still did not change who I was or what I did. I always wore a polo shirt with our name and logo on it anywhere I went. I really had a feeling of wanting to come back — and come back bigger and better than ever. I guess I was honestly angry and was not about to let a flood ruin the business or me. I felt good, my health was good and, as long as that existed, I owed it to myself, my family and others, to make a successful comeback. Failure or giving up was not in the cards.”

Cleanup began about a month after the floodwaters receded and allowed for an assessment of the damage: all the hoists were severely damaged and would need to be replaced rather than repaired. Harley’s Automotive Center employed a local restoration company to handle the cleanup, and excavating equipment was moved in to remove the temporary dike. Rolac was again a driving force, factoring in prominently on the shop rebuild.

“We took this event as an opportunity to also make changes,” Mark ­explains. “Our building is 55 feet x 110 feet and was a seven-bay building. We removed most of the interior shop walls and added another bay door to the back. We also moved walls in our sales area and offices, ­expanding our service desk counter and expanding the customer lounge.”

Amazingly, the Schmidts reopened for business on Aug. 26, 2011; just two months after the floodwaters had taken over. Theirs was the first business in the area to do so, even though the gas station portion would take ­another month before it was fully functional.

“I would drive down the street at night and all would be black until I got to our shop,” he says. “It was both sad and a feeling of accomplishment. So many homes and businesses damaged; people’s lives changed forever.”

“We do a little bit of hands-on, classroom training, and we take ­advantage of that when it’s nearby,” Mark says. ‘We’re a developed city, but we’re in the prairie area — we’re spread out. You’ll drive two hours and see either oil wells or wind turbines. It’s a long drive, and we have to commit an entire day to attend a two-hour seminar. So ­webinars and the use of the Internet are huge, and they’re effective, too. The techs really like it. You can interact right on-line with the instructor. That’s just been in the past couple of years, and it’s been very beneficial to us.”

But the shop’s relationship with ACDelco doesn’t stop there. Since 2005, Mark has served on the brand’s Advisory Council, which provides feedback on product development, marketing programs and independent shop support. Having helped drive business before the flood, Mark decided to go “all out” with ACDelco branding during the rebuild.

“About 10 years ago, we went with ACDelco’s image program,” Mark ­explains, “and we’ve been loyal to their products ever since. From a ­marketing standpoint, they’ve been huge. I really wanted to go with an ­ACDelco image again after the flood, and they really stepped up to the plate on that. We went nuts with it.”
Mark is also a group member of Elite Pro Services, and he says the outpouring of advice from other members around the country — especially those who went through Hurricane Katrina — was incredible.

“Elite’s Jim Murphy sent out e-mails to all of those guys, and I got a lot of input from them,” he says. “I was worried my ­employees might walk away,” Mark recalls. “One of the members told me I needed to reassure them along the way. Others told me what worked for them after Katrina, from equipment to government loans. I sent them floor plans, and guys gave me input on how to improve workflow. One of them advised, ‘Be prepared — tires will go nuts.’ And he was right on the money.”

And speaking monetarily, Mark says while it may be surprising, the shop is averaging more than a 30% increase in business since reopening.

“From 2010 to 2011, we actually finished up 15% higher,” he says. “And the year before was a busy year! If you look at it financially, you wouldn’t have guessed we went through what we did.” A testament to teamwork, dedication and upholding your shop’s value proposition, despite what ­Mother Nature brings your way.