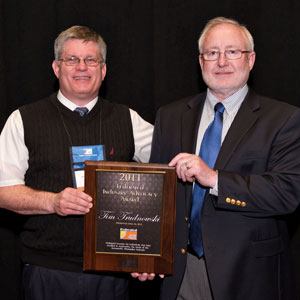 “At Federated, all our members play an active role in the aftermarket, but Tim Trudnowski really stands out with his willingness to volunteer his time and knowledge to help the industry prosper,” said Rusty Bishop, CEO of Federated Auto Parts. “Over the past year, Tim has done an admirable job as vice chairman of AWDA and we know he will do a tremendous job when he takes over the chairmanship this October. We congratulate Tim on receiving our Industry Advocacy Award, a recognition that he truly deserves.”

Parts Wholesalers, Inc. started its longtime affiliation with Federated Auto Parts in 1985. In 1986, the company purchased its first stand-alone store, the original Motion Auto Supply, in the Spokane valley. While this store location was eventually closed in 1989, the name continues on. Today, Parts Wholesalers, Inc. is a 100-percent employee owned company consisting of eight store locations that operate as Automotive Jobbers Supply and Motion Auto Supply. They also supply parts to independently owned jobber stores in Washington, Idaho, Oregon and Montana.