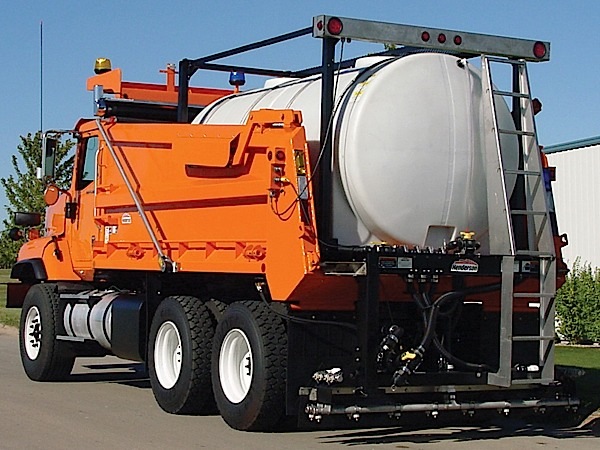 Nothing is worse than having a brake job take longer because of stuck bolts, rusted dust shields and bleeders that have welded themselves shut. If you live in a state that does not get snow, you can stop reading now. If you live in the snow belt, you are about a month away from what they are predicting to be on of the worst winters in recorded time.
It is not the adverse driving conditions that scare me. It is a truck with a large white tank strapped to the back spraying brines on the roads as a new strategy called “anti-icing.” When I see these trucks, old wounds on my knuckles start to ache and I can smell WD40 for no particular reason.
The solution, or brine, is composed of Magnesium or Calcium Chloride.
On paper and in laboratory testing, these chemicals are typically 50% less corrosive on steel than road salt. This is a strong selling point when you consider that the same people who operate the salt trucks also maintain the bridges.
But, the brines stick to vehicles long after the storms have passed and even into summer. They stick to frames, cradles and on the top sides of fuel tanks. Every time it rains, the brines are reactivated and start to corrode vehicle components. At least three recalls have been issued for corrosion to frames and related components. The major victims of the corrosion are brake lines and even brake pads.
I talked to one shop owner in Ohio who said that 30% of his business was replacing brake and fuel lines due to corrosion. He said it has been getting worse over the past four years.
It used to be that people stayed home if the roads were not clear and less aggressive methods, like sand and rock salt, were used. In those good old days, bolts came off easier, frames did not rust and life as a technician was easier in the snow belt.
Magnesium Chloride and some brine solutions can become a conductor of electricity. On busy roads where the Magnesium Chloride solution is turned into mist by passing cars, the ceramic insulators on power lines become coated with a film that can conduct electricity. This has resulted in wooden power poles catching fire and transformers exploding.
When you see that truck with the white tank on the back, you can think of it as an armored car increasing you bottom line. But, it is a cruel mistress that also slows down repairs and skins knuckles.