By Underhood Service Staff Writers
May 12, 2011

Technicians at F&F Tire World in Loves Park, IL, were in for a surprise when the put a customer’s car up on a lift and found a pipe bomb strapped to the exhaust system. The Winnebago County Sheriff’s Department Bomb Squad was called in and they detonated the device.

Below is the article as it appeared on the Rockford Register Star website. 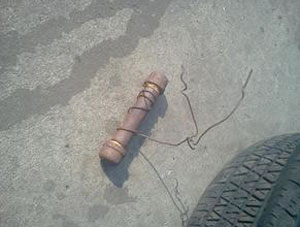 LOVES PARK — Police evacuated businesses and homes near a North Second Street auto service shop this morning after employees there found a pipe bomb strapped inside the tailpipe of a vehicle.

A vehicle came in for routine work at F&F Tire World, 5302 N. Second St., and a mechanic immediately noticed something out of the ordinary.

“We put it on the lift and found a little pipe strapped to the exhaust,” mechanic Andrew Mandujano said.

Workers took the bomb off the vehicle and placed it in a bucket before calling police.

Members of the Winnebago County Sheriff’s Department Bomb Squad detonated the device about 10 a.m. Loves Park Deputy Chief Rodney Scott said police analyzed the bomb before the detonation to determine how it was made.

To read the entire article on the Rockford Register Star website, visit http://www.rrstar.com/news/publicsafety/x1539859187/Pipe-bomb-found-on-car-at-Loves-Park-business.