A security camera at Zych’s Auto Repair in Altamonte Springs, FL, captured a stolen van crashing into the shop’s parking lot. A PT Cruiser and a Saturn that were in the lot awaiting repair were totaled.

Below is the article as it appeared on the NEWS 13 website. 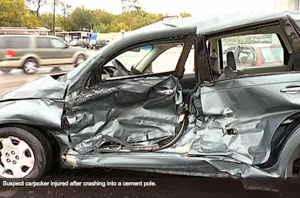 Imagine taking your car into the shop for a minor repair and then getting a call from the mechanic that your car is now totaled.

That’s what happened in Seminole County early Thursday morning after a stolen car smashed into the shop’s parking lot.

James Zych had just had cameras installed three months ago at his auto shop and they caught the whole thing.

The car hit a cement pole and then went flying into the auto service parking lot slamming into two cars waiting to be repaired.

Now the cars are both totaled.

Florida Highway Patrol said the driver was Tyvarius Freeman, 20, was in a stolen car.

To read the entire article on the NEWS 13 website, visit http://www.cfnews13.com/article/news/2011/march/216968/Suspect-injured-after-wrapping-car-around-pole.