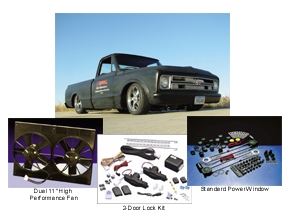 SPAL, in conjunction with HyperMax Engineering, will attempt to set a new land speed record to claim the title of World’s Fastest Diesel Pickup Truck during the Bonneville Salt Flats 2006 World Finals, October 11-14.

"While SPAL is best known for cooling fans and centrifugal blowers, we are also heavily involved in the motorsports arena, using it as a proving ground for our performance products," said Bob Folkestad, director of electronics and innovations, SPAL. "We came up with the idea of the ‘Rocket Ranger’ as a way to have fun and promote our company at the same time."

The "Rocket Ranger" set its first land speed record in 2001 at the SCTA/BNI World Finals with a Roush-built NASCAR Nextel Cup engine enlarged to 371 cubic inches. It reached 205.208 miles-per-hour — a record that still stands — to shatter the existing "Modified Mid/Mini Pickup" class mark by almost 25 miles-per-hour and become a proud member of Bonneville’s 200 mile-per-hour club.

In 2003, SPAL’s "Rocket Ranger" returned to Bonneville to mark the first time a Powerstroke diesel engine was used for a land speed record attempt. The truck reached a respectable 222 miles-per-hour, but was unable to complete a back up run due to an electrical issue caused by an intercooler explosion on a previous run. "This year we have more power, more preparation and a better engine from HyperMax Engineering," said Folkestad.

Continuous research and development efforts have earned SPAL an excellent reputation for high-quality products and state-of-the-art engineering and manufacturing processes. Upon request, SPAL can custom design many of its products to meet specific customer requirements.