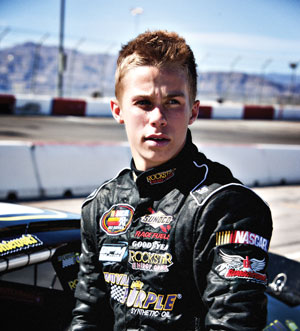 High performance synthetic lubricant manufacturer, Royal Purple, recently launched a new branding campaign on its website, The Royal Purple Outperformer Series. The three-part video series focuses on individuals who have prevailed over adversity to reach the top of their respective fields.

Royal Purple’s first ‘Outperformer’ video, which debuted recently, features the recently turned 17 year-old NASCAR K&N Pro Series West Driver Dylan Kwasniewski of Las Vegas, NV. Kwasniewski was selected in part because of the his success on the track  as he moved through the ranks of Bandolero Bandits, U.S. Legends, ASA Speed Truck and late model circuits.  In 2011 Kwasniewski became the youngest winner in the history of the NASCAR K&N Pro Series West, and was honored as the Series’ Sunoco Rookie of the Year Award. He was also selected as one of NASCAR’s Next 9 for the class of 2011 and 2012, representing the next wave of young drivers who are expected to make an impact on the national series scene.

Kwasniewski has committed himself to focusing on the 2012 K&N Pro Series West season this year. With over half of the season complete, his dedication and hard work has paid off. In eight starts he has recorded two wins, three second-place finishes and eight finishes in the Top Five. With that impressive record, Kwasniewski leads the NASCAR K&N Pro Series West point standings.

Two additional mini-documentaries featuring other Outperformers will air in August and September respectively, and can be viewed by visiting the Royal Purple website, www.royalpurple.com. The videos, which average five minutes in length, will be promoted with 15-second clips on broadcast television and online.

“Royal Purple is the performance oil that outperforms and we thought it was important to identify other leaders within  segments we’re a part of,” said Director of Consumer Marketing, Randy Fisher. “Each of the videos created for this campaign are designed to tell the story of excellence, how they got to where they are now and the dedication that makes them unique. We feel that this level of dedication, refinement of their craft and spirit of continuous improvement make each of these individual outperformers in their field and deserving of recognition.”