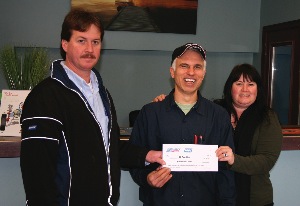 Hamid received the entry scratch ticket from APM Limited, who is a Bestbuy Distributors, Ltd. member, who in turn is a member of Automotive Parts ­Associates.

Hank the Mechanic, originally Auto Esmailion, has been quite a success story, starting out renting one bay from a lube center to now an independent seven-bay shop with a beautiful new office.

“Sometimes you have to encourage the customers to complete the ballots and turn them in, because if you don’t enter, you can’t win!” explains Troy Kingston, salesman with APM Limited. “Hamid and Jill were shocked and extremely excited to win the big prize!”

APA’s WD shareholders conducted the Scratch & Win Sweepstakes at more than 250 locations across the U.S. and Canada from October through December. Each time a product was purchased from one of the sponsoring manufacturers, the ­installer received a scratch ticket. Thousands of dollars in instant-winning gift cards were distributed and several thousand completed scratch cards were returned for the $10,000 drawing.