The conference, which took place at the Manchester Grand Hyatt resort, provided plenty of time for networking opportunities between APA shareholders and vendors, several chances for those buyers and sellers to forge business relationships or strengthen existing ones, and discuss new products and programs, and the opportunity for industry friends and acquaintances to relax, have fun and celebrate all of the past year’s successes.

Several recognitions were made during the Manufacturer One-on-Ones, where APA vendors met during a six-hour timeframe with APA shareholder customers and prospects — many of whom won thousands in cash and gift card prize giveaways throughout the day. 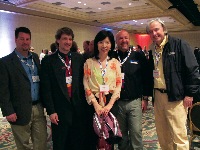 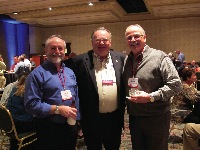 Eight Vendor Awards were also distributed during the One-on-Ones.

The general session also included with a very resourceful panel discussion on how to leverage social networking (complemented by mobile applications on smart phones) to not only drive traffic to your company websites, but, just as importantly, to build your brand and tout the features and benefits of your product lines. Panelists were: Jeff Levine, Levine Automotive; Harris Steinberg, POJA Warehouse; Dan Lelchuk, Centric Parts; and Cheri Reith, Federal-Mogul Corporation.

The panel also discussed the value of a company website and the importance of keeping it current and fresh, using photos and videos to help create a “buzz” and engage customers, and providing a call to action for visitors.

Next year’s conference is slated for March 15-17, 2012, at the Renaissance Hotel in Phoenix.