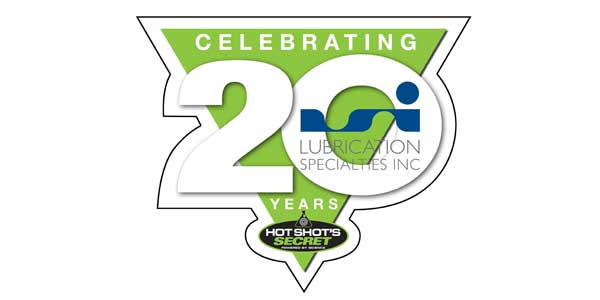 In celebration of its 20th anniversary, Lubrication Specialties Inc. (LSI) is offering a Hot Shot’s Secret online promotion. LSI, formed in 1997, developed the original Hot Shot’s Secret Stiction Eliminator in 2004 to resolve issues related to malfunctioning HEUI injectors for the 6.0 L Ford Power Stroke. In recognition of its 20th anniversary, LSI is giving away a free 16 oz. bottle of the original HSS Stiction Eliminator with any online purchase made at hotshotsecret.com. To receive the free bottle use code: LSI20. The product, valued at $17.95, will be automatically added during checkout. The 20th anniversary online promotion is in effect for a limited time and is in addition to current Hot Shot Secret product specials.

LSI says Hot Shot Secret Stiction Eliminator removes close to 100 percent stiction – the gummy, sticky residue of caked-on oil varnish that often builds up on injectors, bearings, turbos and engine components. With use of Stiction Eliminator vehicles experience fewer hard starts, rough idling and black smoke, according to the company. Often there is improved performance of injectors and turbos, and increased power and fuel efficiency with one application. Stiction Eliminator is formulated to clean and lubricate the entire oil system from the turbo, bearings, injectors, rings and oil pump.