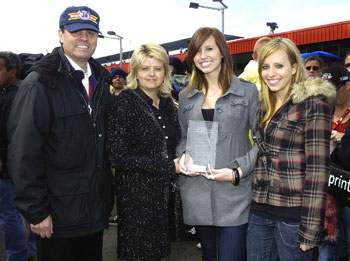 For the second year in a row, the Justice Brothers Shav Glick award has been won by another dynamic and legendary drag racer; John Force. Force took the win after being selected by a panel of prestigious judges from the world of motorsports. The award was presented by Ed Justice, Jr., President and CEO of Justice Brothers, and accepted by two of Force’s daughters and his daughter-in-law during the pre-race ceremonies at the NASCAR AUTO CLUB 500 at the Auto Club Speedway in Fontana, CA.

Force was racing at the time in Phoenix, but commented, “Being nominated for an award with Shav’s name on it is an honor by itself, but to be with people like Robert E. Petersen, Chris Pook and Jimmie Johnson the NASCAR champ, makes it even more special. I wish I could have been there myself, but I’m glad my girls were able to accept it for me. It’ll go right in my museum.”

John Force started drag racing in the early ‘80s slowly rising in the ranks and eventually teaming with Crew Chief Austin Coil in 1985. The John Force Racing Team has won 125 NHRA Tour victories and 14 NHRA Funny Car Championships. The 2008 season promises to increase those numbers with John recuperated and returning to driving, and with the racing prowess of his daughters. Justice Brothers congratulates John Force for his outstanding contributions to the sport of drag racing, and his positive influence on young racing enthusiast worldwide.

For over 70-years JUSTICE BROTHERS has been a supplier of quality professional vehicle care products used worldwide. Manufactured in America, each JUSTICE BROTHERS additive and lubricant is custom blended to offer performance and reliability.