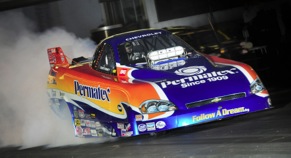 The 2012 Follow A Dream Team will compete in the NHRA series with its Permatex/Follow A Dream 2008 Chevrolet Impala SS Top Alcohol Funny Car and driver Todd Veney, an experienced and successful NHRA racer and motorsports journalist who joined the team in 2010. The team will compete coast-to-coast in a 13-race schedule that includes nine 2012 national events.

Jay Blake, founder, owner, and crew chief of Follow A Dream, said, “We are very excited about the new NHRA season and believe we are in a good position to finish in the top five. Last year, we finished third in our division. Plus, we have Todd Veney driving for us again. He did a great job in 2011 and ended the season ranked seventh among the 79 TAFC cars that participated in the championship series.”

Blake also noted, “Our relationship with Permatex continues to be a great opportunity for both organizations. We are extremely proud to be working with a company that is so highly respected in the industry, and we continue to rely on their outstanding products and support to keep our car competitive.”