French Supermodels Arriving at The Elegance at Hershey – UnderhoodService 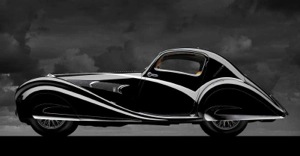 On June 10th, 2012, a collection of the World’s top French automobile supermodels ever created will be on display at The Hotel Hershey during The Elegance at Hershey’s automotive weekend in Hershey, PA.

During the heyday of the 1920s through the 1940s, some of the most beautiful and swoopy custom coachbuilt bodies were designed by various Parisian firms and installed on exotic French chassis such as Delahaye, Delage and Bugatti.  Using terms such as Teardrops, French Curves, and Art Deco to describe the flowing lines and flashes of bright chrome, these cars have long been revered as masterpieces in the car collector world.

Featured on The Elegance showfield will be a pair of Delahayes carrying coachwork by the coachbuilders Figoni et Falaschi. The first, a multi-award-winning 1936 135M short-chassis competition coupe from the Patterson Collection was previously owned by 1930s film star Delores del Rio.

The second is the previous Pebble Beach Concours Best of Show-winning 1937 135M roadster from Mark Hyman of St. Louis.

A third Delahaye gracing the field is the streamlined 1947 135MS coupe with a one-off Swiss body by Langenthal from the Illinois-based Burt Collection.

Fresh from its Best of Show win at the Amelia Island Concours is the 1938 Bugatti Type 57 Aravis drophead coupe bodied by Gangloff from the Off Brothers Collection. One of three surviving examples, this car has a fully documented history and has been winning major awards on the concours circuit since its recent restoration.

Another French beauty to be displayed on The Elegance’s showfield is a 1933 Delage D8S coupe with coachwork by the British firm Freestone & Webb. Delage was often considered the most beautiful of the French cars, and this example from Connecticut collector Dennis Nicotra testifies to that claim.

"We really wowed the crowd with last year’s showfield, and this year will be a repeat performance", noted Car Selection Committee Head Mark Lizewskie, "The country’s top collectors were quite eager to make sure we had a spot for their cars on our spectacular showfield!".

The Elegance at Hershey takes place at the world-renown Hotel Hershey June 8-10, 2012, with The Grand Ascent vintage hillclimb returning for a two-day run on the 8th and 9th. The weekend’s main event, The Elegance, showcases 60 of the world’s finest cars on Sunday June 10th.