A fire that started in an automotive repair shop in Sioux Falls, SD, destroyed six of the seven businesses that were located in the strip mall. Fire investigators have determined that the fire was started when gasoline fumes were ignited by a falling work light. This is the second time the owner of the repair shop has had his business destroyed by a fire that was caused by gasoline being ignited.

Below is the article as it appeared on the KELOLAND TV website. 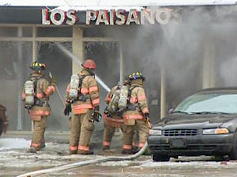 The strip mall commonly known as Cone’s Corner lost six of its seven businesses in the fire.

The Sioux Falls fire department sees a half-dozen two alarm fires in the course of a year and the fire at Cone’s Corner yesterday was one of them.

Investigators were not surprised by the size of the fire once they heard about the chemicals involved.

“They burn hot and fast. Once they ignite, it’s pretty much a flash over,” Fire Investigator Russ Downs of the Sioux Falls Fire Department said.

Gasoline fumes ignited by sparks from a falling work light triggered the fire yesterday afternoon on Sioux Falls east side. Investigators say chemical fires can be dangerous to battle.

“The fire was so hot we pretty much pulled the men out of the building with the hand lines and then we fought it from the outside with the master streams,” Downs said.

One of the mechanics clothes started on fire. He suffered minor burns. Investigator Downs says the lesson everyone should learn from this fire is that flammable liquids cannot be handled carelessly.

To read the entire article on the KELOLAND TV website, visit http://www.keloland.com/News/NewsDetail6371.cfm?Id=111934.