A technician in Sayre, OK, was working on a vehicle’s fuel system when he dropped his work light. The light burst when it landed in flammable liquids, which caused a fire that destroyed the building. The technician has third-degree burns to his face and hands.

Below is the article as it appeared on the NewsOK website. 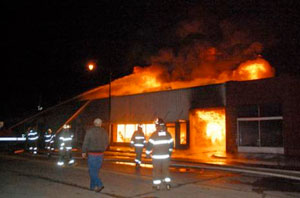 SAYRE — The fire that destroyed a historic building in downtown Sayre on Tuesday started when an auto mechanic accidentally dropped a work light into a pool of flammable automotive fluids, Sayre Fire Chief Robert Ahrens said.

The mechanic, Jose Garcia, remained in the burn unit of Integris Baptist hospital in Oklahoma City on Wednesday in critical condition, a hospital spokeswoman said. Garcia has third-degree burns on his face and hands, roughly eight percent of his body, spokeswoman Brooke Cayot said. He had gas and oil on his skin and clothes that caught fire when the work light’s bulb burst in the fluids, Ahrens said.

Joe Draper, building owner and the son of the building’s longest-tenured tenant, said Garcia was an employee of Ken’s G-R Automotive.

To read this article on the NewsOK website, visit http://newsok.com/sayre-fire-started-with-dropped-work-light-official-says/article/3533771.