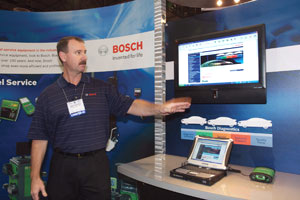 Bosch’s advanced bracketless ICON wiper blade is going racing! ICON blades are now poised to take on the rain in Grand American Road Racing throughout North America. Bosch has formed the ICON Wiper Blade Challenge, which is a contingency award program that will provide for the use of Bosch ICON wiper blades under rain racing conditions, as well as the display of the Bosch logo on each side of the race car, plus cash awards.

Bosch ICON wiper blades, with an integrated aerodynamic wind spoiler, are specially suited for high speed driving in wet conditions. This spoiler improves airflow over the blade to create increased down force, applying uniform pressure on the entire blade for superior visibility.

In the ICON Wiper Blade Challenge, each participant in Grand Am’s Rolex Sports Car Series or the KONI Challenge Series will be supplied free of charge with sets of ICON wiper blades as well as $300 contingency for the highest finishing car utilizing the ICON wiper blades. The Grand Am technical team will verify program compliance.

"The ICON Challenge program enhances the Bosch involvement in Grand Am racing, where many teams already run Bosch engine management systems, fuel injection, spark plugs, oxygen sensors, braking systems and other components. The program and its implementation will afford Bosch the opportunity to test the ICON wiper blades the motorist can install on his everyday vehicle under the stress of true racing conditions," said Wolfgang Hustedt, North American Motorsports Manager for Bosch.

The Bosch Group is a leading global supplier of technology and services. In the areas of automotive and industrial technology, consumer goods, and building technology, some 272,000 associates generated sales of more than 46 billion euros (over $63 billion) in fiscal 2007. The Bosch Group comprises Robert Bosch GmbH and its roughly 300 subsidiary and regional companies in over 50 countries. This worldwide development, manufacturing, and sales network is the foundation for further growth. Bosch spends more than three billion euros each year for research and development, and in 2007 applied for more than 3,281 patents worldwide in 2007. The company was set up in Stuttgart in 1886 by Robert Bosch (1861-1942) as "Workshop for Precision Mechanics and Electrical Engineering.