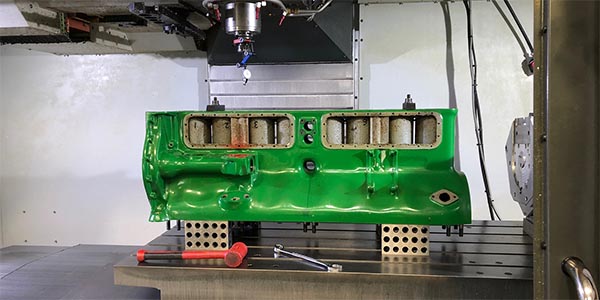 Find out what went into the rebuild of this 1929 Duesenberg engine.

John, along with his brother Jim DeBates, established Auto Machine Inc. in August 1974. This was an easy decision for the brothers to start an automotive business as their family had been in the industry since 1902 in St. Charles, IL. Starting out as drag racers in the early ‘70s, the DeBates brothers decided the only way to get good machine work done was to do it themselves.

Auto Machine first focused its attention around cylinder head work because it was easily available. Starting with only a valve grinder, seat and guide machine, hot tank and surface grinder, the business quickly expanded into a full machine shop with crankshaft grinding, crankshaft welding, line boring, and rod reconditioning.

Today, you can get your engine completely rebuilt from A to Z at Auto Machine Inc., which does a wide variety of engines – everything from antique motors to stock rebuilds to all-out performance.

“We’ve changed our business over time,” John Debates says. “Do we want to be a production-style engine rebuilder or do we want to do custom work and go into niche areas? In the late-‘80s we got our first ‘real’ vintage project – a 1924 Studebaker, a referral from another customer – and we got into antique engine building and really liked that. We’ve done a lot of weird stuff.”

DeBates is quick to point out that “weird” is good – at least in his mind – and vintage work makes up about 25 percent of the business.

“We do a lot of stuff from the ‘40s and ‘50s, which to me doesn’t seem that old because I was born back then,” DeBates says. “We also work on lesser-known domestic vehicles from the early days and a lot of old European stuff from the ‘20s and ‘30s.”

A perfect example of the shop’s affinity for vintage engine work is a recent rebuild of a 1929 Duesenberg engine – a straight eight, dual overhead cam, four valves per cylinder engine.

“That was kind of interesting because I had always wanted to take a Duesenberg apart,” DeBates says. “This gave that opportunity. The customer came to us from a body shop in Rockford, IL that we’ve done work for now for the last four or five years. They do high-end restoration work. The place has got Duesenbergs, old Packards, Pierce Arrows and stuff like that in it all the time.”

The customer was referred to Auto Machine for two reasons – his ‘29 Duesenberg engine needed an oil hole re-sleeved and the block had a stud that needed attention, primarily. The shop ended up doing a few other fixes, but those were the main reasons the engine needed help.

“The engine had an oil passage that ran through the water jacket and it corroded through,” he says. “We had to disassemble the engine and bore that passage out and sleeve it. We put in a 10˝-long brass sleeve down in the hole to repair it.

“When I was repairing this oil hole, there was like three other holes that intersected it. After I put the sleeve in there with some Loctite, I had to go in and drill the sleeve to make sure that the oil was going to flow to the right places. I was a little worried I might miss one, but the owner had a complete diagram of the oiling system and the whole engine. The sleeve was a 1/2˝ OD for the oil hole. The sleeve material was a piece of thin-wall brass tubing from McMaster-Carr.”

The next step was to fix the block’s deck surface and the stud that was misaligned, along with a few other small fixes to get the engine back to normal.

“It terms of the work, we just did some basic stuff,” he says. “I polished the crank a little bit before I put it back in. We had to detail a couple other little things the guy wanted while we were in the engine. We also fixed a stud in the deck surface. Somebody at one time, put a heli-coil in and this stud was leaning at about a 10-degree angle. Somebody had to beat the heck out of it in order to get the head on. That was one of the other reasons we got the engine because someone messed that up. When I had the block all stripped down, we put it up in one of our Haas machines and made an insert to go in there to eliminate the heli-coil and took it back to the original thread and made sure it was straight up and down.”

The ‘29 Duesenberg engine got washed down before the shop put it back together, but all-in-all, the engine was in good condition for being 91 years old.

“I have never seen an engine before that looked like it was a Swiss watch,” DeBates admits. “The lower timing chain on it – it’s got two timing chains – drives all the lower stuff and the other is up top. It’s a dual overhead cam motor. The chains are like 3˝ wide. The crankshaft is completely polished and it’s just a beautiful piece to work on.

“It’s a straight eight-cylinder engine that I believe is 420 cid. It puts out 285 horsepower. That was non-supercharged. The supercharged one, which came out in ‘30 or ‘31, was 320 horse. At 285 horse, that was the most powerful engine up until the mid-‘50s when the Hemi came out. That was at the time that Ford was dealing with the Model A at 40 horsepower. In ‘32, Ford came out with his V8 and it had 60 horsepower in comparison.

“According to Jay Leno, they have a three-speed trans, and in second gear, you could get them up to about 90-95 mph. I don’t know if I’d want to run at that speed in a ‘29 car, but they’re incredibly innovative. There’s a little lever on the side of the motor that opened the drain plug in the bottom, so you didn’t have to crawl underneath there and take a plug out. You just slide your waste oil can underneath it and flip the lever and the oil drained out of the motor.”

With this ’29 Duesenberg engine given a clean bill of health, the short block was returned to the customer’s mechanic to finish the restoration from there.