Gonzo’s Toolbox: Success is in the Details – UnderhoodService 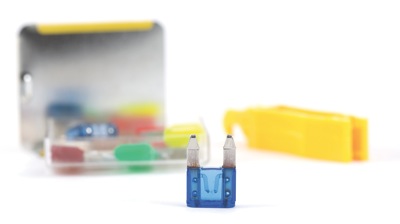 The other day, the owner of one of the many body shops I do work for came by with a little problem on a 1998 Honda. Doug wanted to make sure I knew how much he appreciated everything that I’d done for him over the years. I’m not sure whether he was bragging, or just being complimentary. Maybe he was trying to soften me up, before I gave him the bill.

“You’re the first person I call,” he proudly tells me.

“Well, thanks Doug, I appreciate that,” I told him.

“You know, we don’t know a whole lot about this electrical stuff. That’s what we’ve got you for. You always bail us out.”

He headed back to the body shop, and left the ­little Honda for me to look at. By that afternoon, I was on the phone to let him know that it was a simple problem with the hazard switch, and he could pick up the car to finish the body work.

The next day my daughter Katie (my office manager) got a call from Doug. They also ran into a little trouble with a 2008 Toyota Camry. The battery was dead. Somehow, while charging the battery, they touched the positive and negative leads from the jumper cables together while they were still hooked to the car. Now the car would only idle. Katie came out to the shop to ask me what I thought might be the problem. I was busy on another job, stuck under a dash looking at a fuse box.

“Sounds like he blew a fuse,” I told Katie while sticking my head out from under the corner of the dash.
“That’s it?” she asked.

“Sounds like it to me. Oh, and tell him once he changes the fuse, to go find the guy who did it, and kick his butt for me,” I told her with a grin.

She walked back to the phone, shaking her head and smiling.

“That’s it? I hope so,” Doug tells her, “because if we had to drive it across town for him to check it out, we could only idle it the whole way. We’d look pretty foolish if we did that, and it turned out to be only a fuse.”

“That would be pretty bad,” said Katie. “He did have more information for you though. His professional diagnostics also include that you kick the guy’s butt who did it.”

“Well, all right then, I’ll take care of that personally. Tell your dad thanks again. One fuse, one butt kicking…got it,” Doug told her with a chuckle.

The next day here come the boys from the body shop driving the Camry very slowly, and followed closely by another slow-moving car with its hazards on, as well. I was not a bit surprised.

“Here’s the car that we called you about yesterday,” the driver tells Katie.

“You mean the one with the blown fuse?” she asked.

“We looked, and it’s more serious than that,” he says.

She came out to the shop and told me about it. I had to laugh. Even though I had no clue what was really wrong with it, I was pretty sure it was a fuse. Well, at least it sounded like a fuse to me.

It idled its way around to the front of the shop and into a service bay. The service light was on; I could see that from the start of my slow journey. But I couldn’t go get the scanner right at the moment. I was busy creeping around the building at a snail’s pace.

The code was for the TCS (throttle control system), and the diagnostic tree was extremely long. Sometimes I wonder who writes these things. You know it would be a lot easier if it would start with the basics, like grounds, power and resistance values. But no, there’s not a chance.

They have to go through a ­series of steps that all pertain to the system, but that don’t even get close to the cause of the problem. The test started out with an ­explanation of the code; low ­voltage has been detected by the PCM for the TCS. Great, that’s sounding like a fuse to me. I could have stopped there, but I decided to keep reading.

Then, it wanted to know the scope readings and then the continuity between each wire. Finally, around steps 10 or 12, the test got to the good part — “Check Fuse.”

How about instead of going all the way through pages of diagnostic tree mumbo-jumbo, you start the procedure at step one with “Check Fuse!”

I finally got the answer I was looking for. What do you know, the fuse was blown. I changed the fuse and cleared the code and all was well with the little Camry.

Katie called Doug to let him know it was ready.  Since it was for Doug, I couldn’t resist having some fun with his misfortune. I wrote up the invoice with a few “special,” informative ­automotive terms.

She started to read what I wrote on the invoice to him, “The PCM has found a low-voltage signal present at the TCS. Further diagnostics was needed to confirm that a loss of signal voltage was present. The FCA (fuse control assembly; made that up on the spot!) had an open protective ­device to the TCS, and the PCM was not receiving an input signal that would allow the TCS to ­respond. Reconfiguring of the FCA was necessary to initiate electro-balance of the ­current draw to the PCM.”

Doug was getting a little nervous and said, “OMG, can he fix it…this is bad, isn’t it?  This is going to cost me a bundle.”

Katie, in her feisty manner, put the screws to him. She played it up for awhile, and then let him off the hook, “Well, Doug, I could leave out all that technical stuff, and try to give you an answer that would be easier to understand.”

“The fuse was blown.”

Doug holds the phone up against his chest so Katie can’t hear what he yells back to one of his guys in the shop.

“Dang it, I thought you said you checked all the fuses?”

Then turning back to Katie he said, “Aw geez, why me? OK, we’ll be over to pick it up. The butt kickin’ will commence in just a second.”

Ah, yes, another day at the shop, and another butt kickin’ in progress. I hope the rest of Doug’s day goes better. As for me, I’m sure glad I was right about this one; it wouldn’t be much of a story if it were something besides a fuse.

I would have loved to have a camera mounted on the car to watch the embarrassment of someone idling a car across town through the intersections and all the usual traffic. And then one on Doug, just to see his face when he found out it was only a fuse. Yea, I think a butt kicking is in order on this one. You made my day, Doug. You and your guys may not know electrical, but you do know body work. You’re one butt-kickin’ body shop!