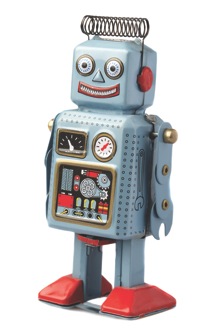 Throughout the evolution of the modern ­vehicle, there have been an increasing number of duties taken over by computers. These computers have not only made the ­engine more fuel efficient, but also more environmentally friendly. Nowadays, these systems are starting to “think” for themselves and make decisions for the driver. Things like park assist, keeping a safe distance between cars on the road and collision avoidance are just a few ­examples of the capabilities of the modern computer-driven automobile.

In some ways, the car has become a thinking, reasoning and quite capable robotic apparatus. You’re not so sure of that? Well, let’s define robotic function and a robot’s task. A robot is a device that manipulates its surroundings by way of certain inputs, which are dictated by the software or information instructions set into its protocol. In a sense, the information is its brain. Not all “robots” are in a form of the walking-talking version; a robot can be stationary and ­perform one task over and over again.

Take, for example, the Anti-lock Brake System (ABS). This can be considered a robotic function. The ABS module (or brain) is given a task by way of its programming, and, in turn, watches for certain input signals from various sources such as the wheel speed sensors, brake pedal application, and engine and transmission inputs. It’s a stationary robot in a non-stationary setting. If the system fails to follow the preset instructions, it gives the driver an indication of its condition by way of a service light.

The necessary repair is still left up to the technician. I’m kind of glad for that, as I don’t know if I’m up to dealing with the “Terminator” mentality of a walking, talking robotic device that inevitability figures out it’s smarter than its creator. These days, a modern technician uses a computer to talk to the vehicle’s computer. That makes it three “brains” involved in determining the reason for the service light: two cyber brains and one human brain. And, each one of them has to do its job correctly.

When one or more of these “brains” malfunctions (and, yes, I do mean the technician’s too), the whole process of figuring out the problem becomes a lesson in futility.

I recently had a car in the shop that wasn’t communicating with any of my scanners. As the technician, aka “The Human Brain,” it was my task to figure out why and where the lack of communication was originating. It wasn’t long before I tracked down the culprit. Not only was the main PCM in the car dead, but so were several other processors. It looked like a case of brain damage to me. All the usual suspects for this type of problem, such as power sources, grounds and communication lines, checked out to be in good condition. The test results showed that the car had been struck by lightning. It appeared that this little robotic wonder of modern technology had been done in by Mother Nature herself. Even in the electronic age…Mother Nature still rules.

But among the variations of problems a technician can run across, there are those occasions where the car is fine, but its second brain (the “scanner”) is damaged in some way. On occasion, I’ve had to deal with an uncooperative scanner. After getting in and out of a car countless times, and the endless twisting and manipulating of the cords and connections, the scanner can come down with its own form of brain damage. Sometimes, it’s the service cord at fault, while other times it’s the scanner itself. (I keep the shipping boxes just in case I have to send one in for repair.)

The big problem for the consumer these days is the modern car can’t function without these ­computers, nor can the modern technician diagnose or repair a lot of the functions without a computer to talk to the car. We’ve become so dependent on the electronic wizardry of these modern conveniences, that our world today couldn’t function as we know it without them.

Sometimes, I feel like I’ve got brain damage myself when I’m trying to figure out the multitude of problems brought on by all these electronic components. There are numerous problems that exist only in today’s cars ­because of all of these technical advancements. You wouldn’t see some of these problems in a car without a computer under the hood.

In years past, a lot of car components were rebuilt right in the shop, and most everything was a “hands-on” repair. A tech ­removed a part, would take it down to its individual components, replace one or more parts of the original component, and then reassemble it. That is not the case today. Most parts are electronic or have been manufactured in a way that the individual parts can’t be taken apart. Most of today’s automotive ­repairs require a higher degree of understanding of electronics, as well as mechanical aptitude. You really need both to be a good tech these days.

Our technical advancements and electronic world is moving closer and closer to a place that our forefathers of just one generation ago would never recognize. It won’t be long before the automatous car is the norm (which is nothing more than a robot on wheels), and imagine what they would think of those!

These innovations are enough to give me brain damage if I ever get a chance to stop and think about them long enough. Technology will continue to evolve and dealing with those changes is what today’s successful ­technician must expertly do.