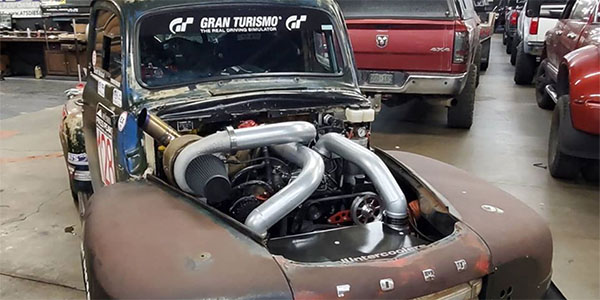 What started as a $225 1949 Ford F1 soon became a 12-valve Cummins swapped shop truck and is now a $400,000 full-on road racing truck with a 1,400-horsepower 6.7L Cummins under the hood. The man behind the truck known as Old Smokey F1 is Scott Birdsall of Chuckles Garage in Santa Rosa, CA. Scott and Old Smokey recently set the Pikes Peak International Hill Climb record for a diesel with a time of 11:24.065 on the 12.42-mile course featuring 156 turns and 14,000-plus-feet of elevation.

Admittedly, Scott says he has a problem with self-restraint when it comes vehicles. “Old Smokey was found on Craigslist,” Birdsall says. “My tool guy gave me a tip and said there was an old Ford truck on Craigslist and I should go look at it. I looked it up, it was $300. I went and looked at it. I noticed it was really solid and had a really cool patina on it. I bought it and paid $225 for it and then dragged it back to the shop where it sat in the yard for a while. I thought about flipping it because I got it so cheap, but it started to grow on me.

“I decided to make it into a shop truck to run around in and grab parts and stuff with, so we put a 12-valve Cummins diesel in it and some standard stuff. It was basically a diesel swap pickup. I have a real problem with self-restraint, so one turbo turned into two and two turned into two really big ones and then it turned into needing big breaks. Before I knew it, it was a full-blown race truck with a license plate on it.”

Scott debuted Old Smokey’s transformation at the 2016 SEMA Show where it was on display in the Auto Meter booth. Show attendees helped the truck go viral.

“It went completely viral,” Birdsall says. “It was everywhere, and it won Car and Driver’s Top 10 of SEMA 2016. After that, I had a little bit of fun with it on the street, but I thought it would make a better full-on road racing truck. It went through another evolution of pretty much everything – literally everything. Now, it’s a well over $400,000, best-of-the-best components, hill climb truck.”

Before Scott came across the now famous 1949 Ford F1, he had always been a bit of a gear head and grew up racing dirt bikes and go-karts. However, it wasn’t his full-time job to work on cars and go racing until more recently.

“I started Chuckles Garage about 12 years ago,” he says. “I got sick of the corporate world. I designed circuit boards and controls for a tech company and when tech started falling apart in the early 2000s, I ended up at Home Depot as a district manager. It was the absolute worst job I’ve ever had in my life. It motivated me to start my own shop.”

After getting into club racing and then some World Challenge racing, Scott walked away from the track for a little while because it got stressful.

“I fell back in love with it in the past six to seven years,” he says. “I started doing instructional stuff with a company called The Driving Connection and I’ve been getting back into professional racing with my truck and doing the hill climbs and stuff like that. I always had my shop on the side, but it was never my main source of income. I started my shop and focused on traditional hot rods and stuff like that. In the past eight years, I’ve been focusing more on modern road racing cars and turbo systems.”

Scott will be the first to tell you he isn’t a diesel expert, but since owning Old Smokey, his knowledge of it has grown immensely.

“Because of this truck, I know quite a bit about it,” he says. “I work with all the top diesel manufacturers to get Smokey where it’s at.”

“The first time I went [to Pikes Peak] was in 2018,” he says. “It was my rookie year and I actually crashed in tire testing and got pretty well injured. I herniated two discs in my neck and broke my tailbone. We ended up fixing the truck in eight days and coming back and qualifying for the race only for the engine to blow up, so we went home in 2018 before the race.

“In 2019, everything actually went really smooth except for having to replace the engine once. We qualified well, but they say the mountain decides and the mountain decided to rain and hail, so my run was only halfway up the mountain before they canceled it due to safety reasons.

“This year was awesome, but probably the most trying year I’ve ever done there. We had an engine blow up before we even left during testing. We changed that engine out. We got all the way through tire testing, all the way through practice and got to qualifying. My qualifying engine was a loaner from Spencer at Fass. He pulled it from his personal race truck and sent it to me so we could qualify.

“Then, that engine blew up during qualifying, so I didn’t get a qualifying time. None of these were Freedom engines by the way. Freedom is a new supplier. Dynomite Diesel sent their best guy down with a brand-new Freedom Racing engine and we put it in in a day, dyno tested it the next day and then showed up at final practice the Friday before the race. Everybody was totally blown away that we did that.”

As mentioned, the truck has come a long way since it had a 12-valve Cummins in it. The engine now is a modern 6.7L Freedom Racing Engines common rail Cummins diesel.

“The secret sauce, which hasn’t really been done with any kind of racing diesel yet, is we don’t run petroleum diesel. We run a 100% petroleum free, renewable diesel and we also run a prototype injector from Dynomite Diesel. Those are nearly smokeless at that high-power level at altitude and that’s never been seen. We just recently, within the last few months, developed all this new technology with Dynomite Diesel and it’s amazing. It’s crisper and faster on-throttle response and nearly zero smoke. We were blown away.”

Old Smokey’s 6.7L Cummins is what Freedom Racing Engines calls its Stage 2 build. It’s a 6.7L bored .020˝ over and was drilled and tapped for 14x2mm head studs and the mains were drilled and tapped for 9/16ths main bolts. The block was also line bored for cam bearings throughout the entire cam tunnel and features a Hamilton Cams 188/220 camshaft.

According to Freedom, this engine recipe is the shop’s best seller and most of the magic is in the head work and the 6.7 bore size allows for oversized valves.

“We got the engine overnighted from Dynomite Diesel,” Birdsall says. “They drove it here and dropped it off. Then, final practice went rough. A competitor, who I will not name, was talking to me and proceeded to reach inside and touch some buttons and switches and one of those switches ran the emergency misting system for our radiator, which is only to be used in extreme conditions. Unfortunately, that system works off the same water tank that feeds the water injection and if you don’t have water injection on a Cummins this high-strung, it absolutely melts down.

“We overheated our brand-new engine to the point where it almost hot seized itself and scuffed some of the pistons, so we didn’t think we were coming back to the race. We got back to the shop, changed the oil and the oil wasn’t bad, so the pistons couldn’t be too bad. We put it back together and I got it back on race day and I beat the record.

No one has ever said a Pikes Peak Hill Climb is easy, and Scott would certainly agree its one of the hardest races in the world.

“There’s no way I would be on top of that mountain without my guys and my crew,” he says. “They worked so hard the whole time to keep going. I don’t know how many times they looked at me like, ‘You still want to keep going?’ I’m like, ‘Yup!’

And the effort paid off in a record 11:24.065 time. Going forward, Scott has no plans to slow down with Old Smokey. He already has his eyes set on breaking more records.

“I’m probably going to change to independent rear suspension (IRS) pretty soon because it’s got a solid rear axle and I think the IRS will help it greatly,” he says. “I’m going to change the cooling system, but really I’m going to focus on what I’ve always done – just having fun with it at the track. I’d like to push my land speed record (167 mph) up to 180 mph. And I would like to get it into the mid 10 minutes at Pikes Peak. I was on pace for a 10:40 if it didn’t overheat.”

Engine Builder‘s Diesel of the Week is sponsored by AMSOIL. 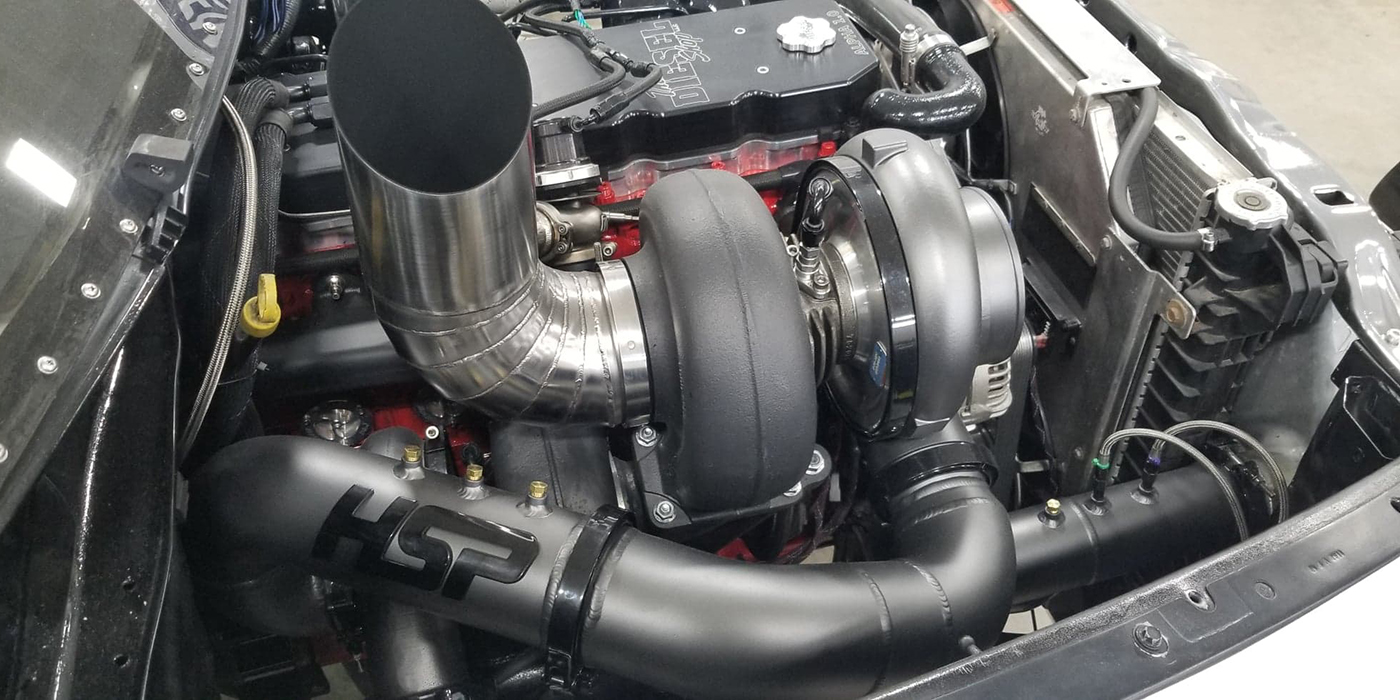 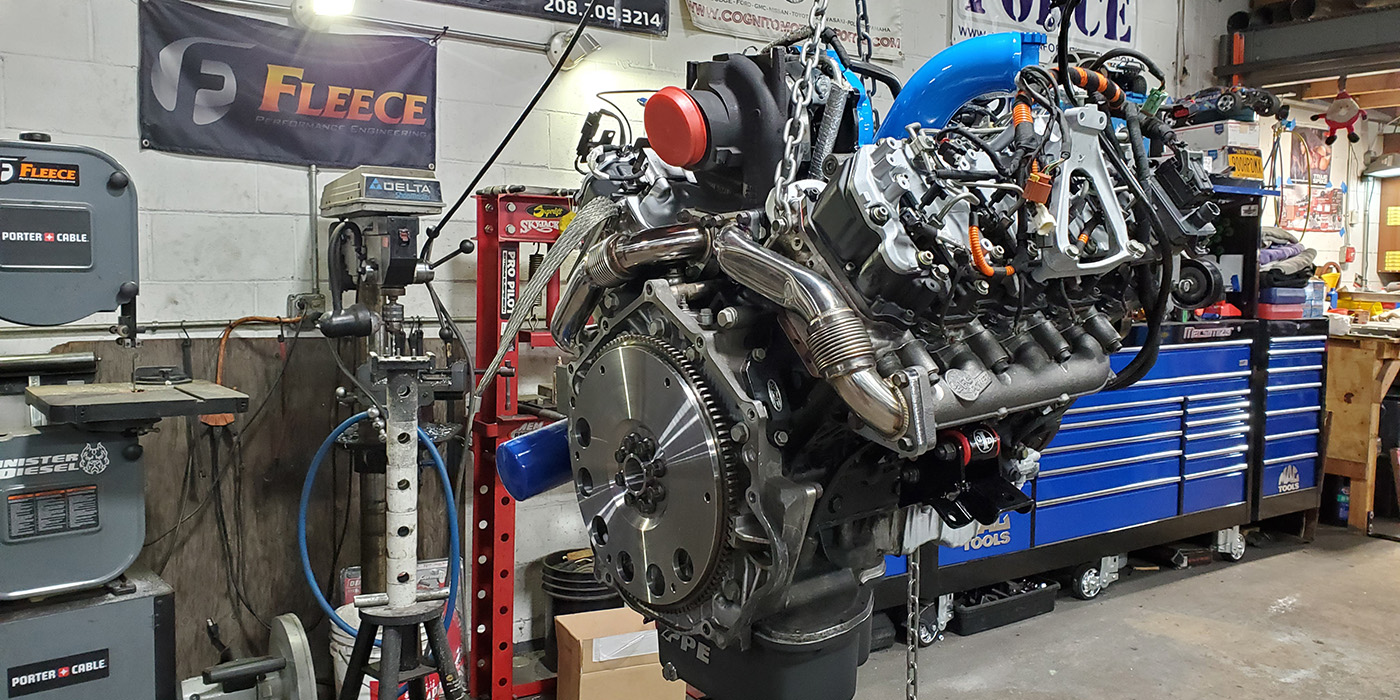 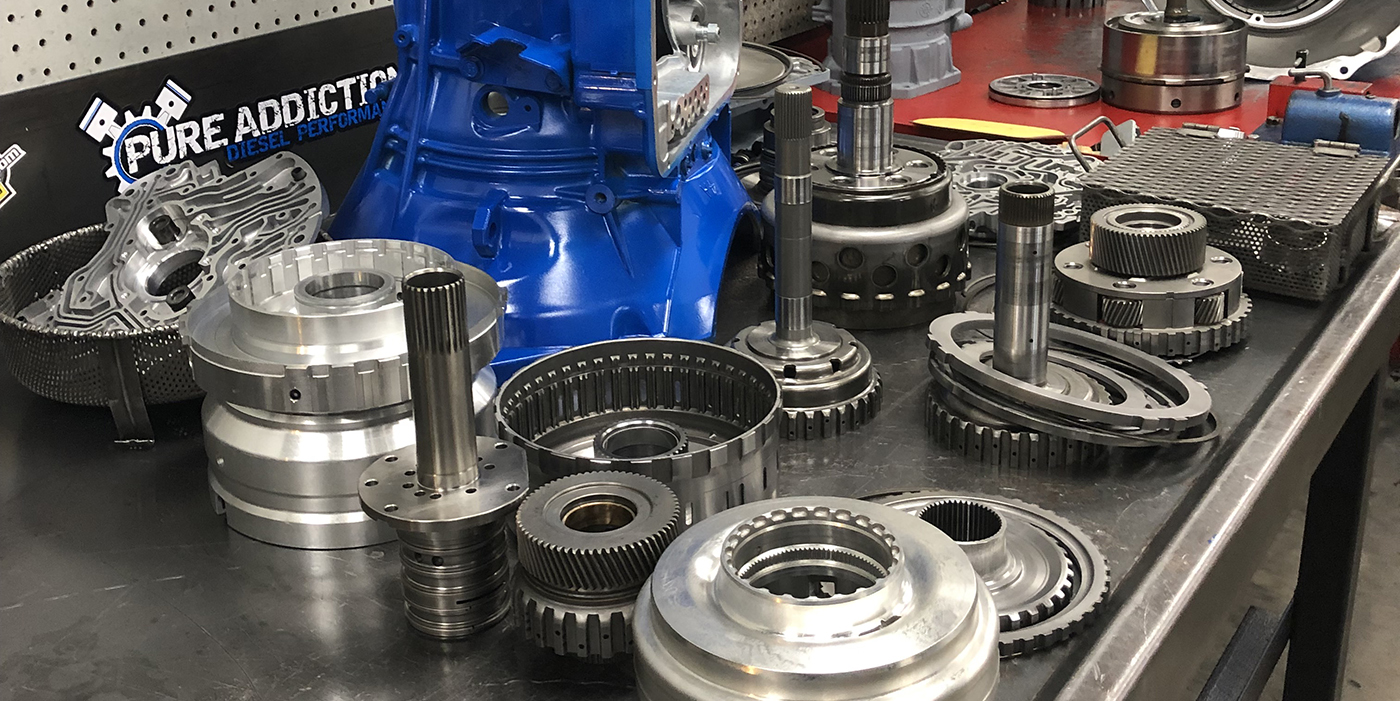 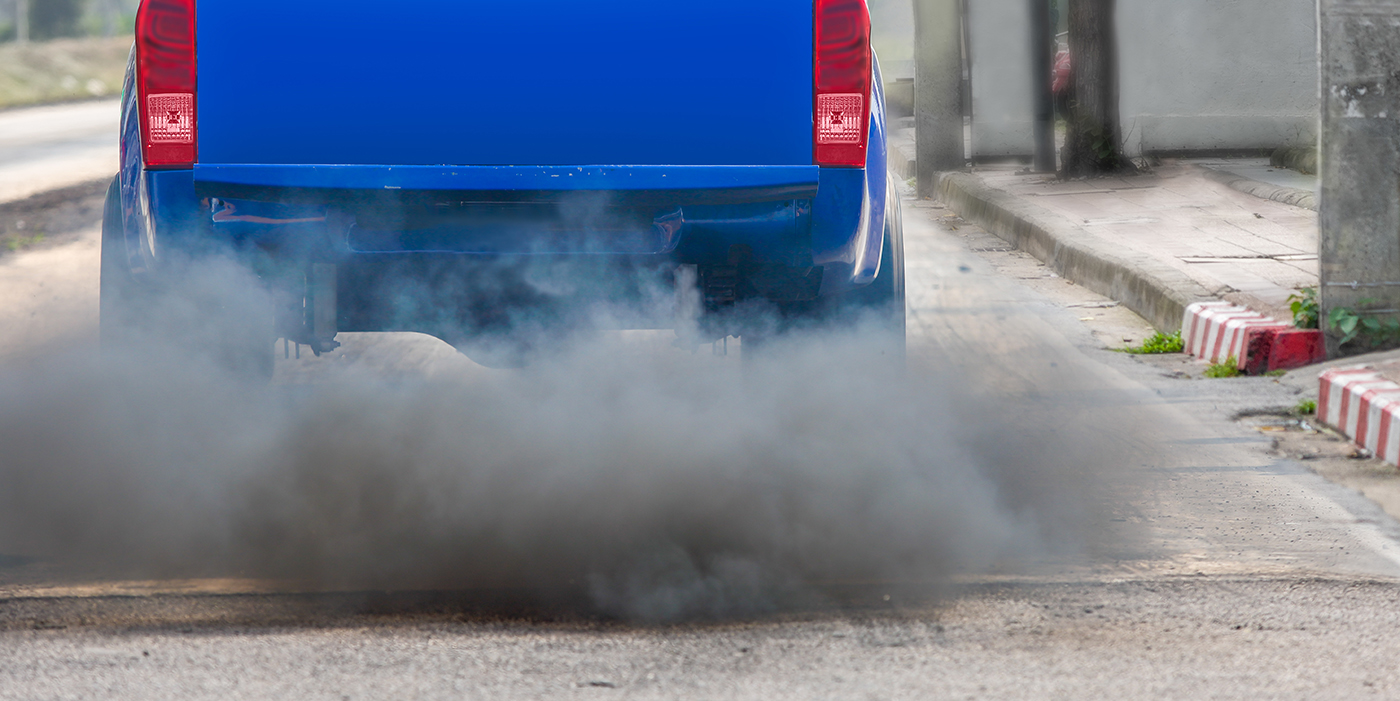 Why would you want to build a fully working 1:3 scale Cosworth DFV engine? Marcel Bouland asks, ‘why not?’ 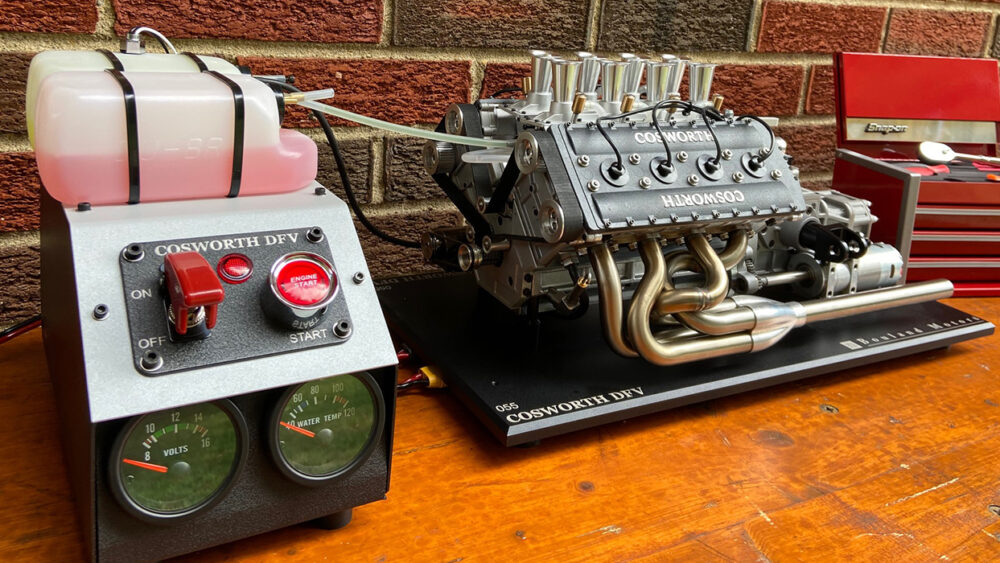 Boasting 335 hp from the factory, find out how Stephan Papadakis tripled the power output! 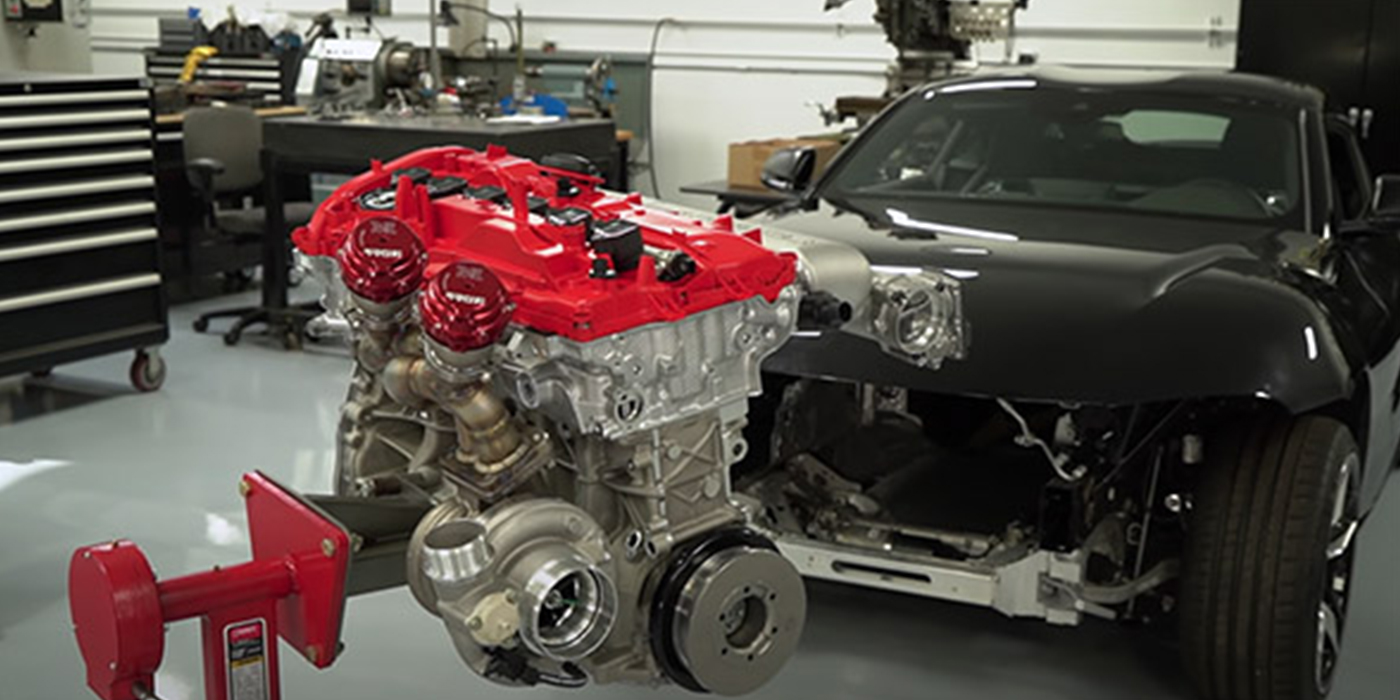 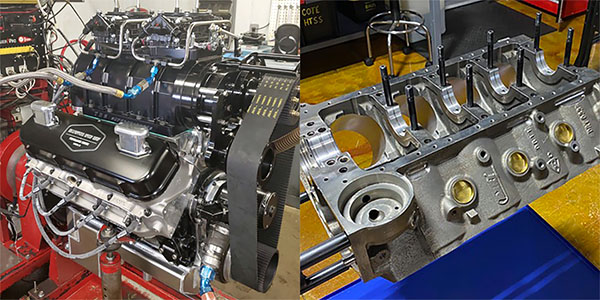 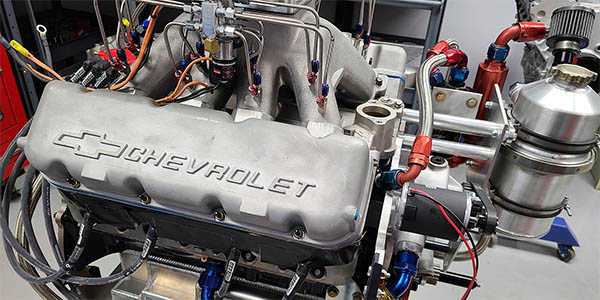