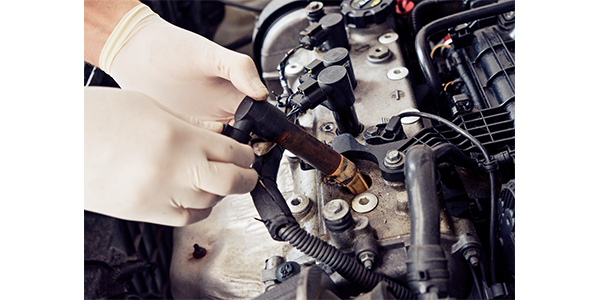 All ignition coils transform a low-voltage/high-current power in the primary to high-voltage/low-current energy in the secondary. An ignition coil has no moving parts that can fail or wear out – what is moving inside an ignition coil are electrons and magnetic fields between coils of wire and metal plates cast into epoxy resin.

What kills ignition coils is location; being mounted in one of the hottest, most vibration prone and dirtiest parts of the engine.

Modern ignition coils are typically located between two camshafts on the valve cover and exposed to dirt and oil. But, even if a coil is mounted in a cool, clean and vibration-free environment, if the gap on the spark plug is not correct or there are issues with high resistance in the cylinder, it won’t take long for a coil to fail.

As the gap between the electrodes on a spark plug increase, so does the amount of energy required to create a spark. Why? Air is the ultimate resistor when it comes to creating a spark. Fuel, oil and even turbulence in the combustion chamber can alter and increase or decrease resistance.

When resistance increases, the secondary and primary coils have to work harder to make high-voltage/low-current spark. The harder the coil has to work, the more heat the coil will generate. The heat will not melt the internal components, but as the coil is heat cycled, the greater variation in temperature can cause the epoxy to crack. Once the epoxy is damaged, moisture and contaminants can work their way into the coil. Vibration makes the situation even worse.

If there is a misfire or dead cylinder, you first need to use a scope and meter. Swapping coils may lead to additional damage to other damaged driver circuits on the vehicle. If the resistance is lower or zero, or the meter shows infinite resistance, it should be replaced. If you are unsure, check the resistance on another coil.

Low resistance or a short in the primary can cause the transistor to carry more current that can damage the control circuit. If you swap a bad coil and the driver for the coil is in a module, you could damage another circuit and have two bad drivers instead of just one.

Electricity will always want to go to ground through the path of least resistance. For ignition systems, this means energy coming out of the secondary will want to create a spark outside the combustion chamber if a low resistance path is present.

When the power from the secondary is traveling through the boot, ignition wire or spark plug, it creates static electricity that causes oil and dust in the area to stick to the component. You have probably seen this condition on spark plugs where the ceramic insulator is exposed on the side of a head. The spark plug can have a yellow or orange band that is called a corona stain. Some technicians mistake it for exhaust gases leaking between the shell and insulator. If enough material builds up on a boot or plug it can create a path of least resistance for the electricity generated by the secondary. This is also the same phenomenon that causes carbon tracking inside a distributor cap.

If the ignition coil is mounted in the head above the spark plug, the possibility of carbon tracking is reduced, but not entirely eliminated. If the valve cover gasket or spark plug tube seal is leaking, the oil and vapors could cause carbon tracking and other damage eventually. If the boot does not fully seal against the top of the tube and insulator of the spark plug, oil and dirt can find its way on to the plug and boot. This is why a very light coating of dielectric grease is recommended. However, too much dielectric grease can attract dirt and oil without the help of static electricity.