The New Beetle has been around for several years now, and except for the classic shape, it’s not the Beetle of old. Unlike its ancestor, this New Beetle is conventional, modern and sophisticated. It has all of the bells and whistles of other current models, the performance and handling of a conventional front-wheel-drive car, and is still cute. One thing it does share with the original Beetle is popularity. The New Beetle sells quite well, and more and more of them are on the road. From baseline GL models to top-of-the-line turbo Cabriolets, there are versions to fit any desire. This article will focus on the various maintenance quirks that relate to the unique design of the body.

The basic vehicle layout is the same as the Golf and Jetta. Actually, the New Beetle chassis was here before the Series IV cars. The design is very conventional, with a strut suspension in front, and coil springs with separate shocks for the rear axle. The brakes are huge for the vehicle. They’re equipped with 4-wheel disc brakes and most have ABS as standard equipment. Engines and

transmissions are VW standard units – 2.0L gas, 1.9L TDI and 1.8L turbo models. Be sure to always check for engine codes before ordering parts (see Figure 1), as there are many running changes that are not necessarily along model year lines. There are different versions of each of these engines and some parts do not interchange among them. Note that there are airbags all over the interior, so be aware of their location before starting any disassembly procedures.

Before getting into the specifics, I have a couple of recommendations. One, check your service information database to see how much New Beetle specific information is available. If information is lacking, get a New Beetle-specific manual as a reference. Two, if the customer has the owner’s manual, spend a little time reading it to get great information, including answers on how some items are supposed to work. Three, there are a lot of plastic parts on these cars (including the fenders, hood and deck lid) so care will be needed to prevent breakage. Four, these cars will be around for a long time, so learn how to work on them; it just gets easier.

After the covers are off, one look under the hood reveals that the layout is not too bad (see Figure 2). On turbo models, for instance, the spark plugs are under the coil packs, which are under the collection of switches and hoses on the top of the engine. By removing a few screws, the bracket for these components flips out of the way and plug access and removal is fairly easy. On early models, the coils are held in place with small bolts; later cars just have the coil packs seated in place with the rubber insulator. As with all VW models, make sure you are using only the recommended replacement parts to avoid comebacks.

One basic maintenance item that is more difficult on all New Beetle models is the air filter (see Figure 3). To prevent breaking the hose extending from the MAF sensor to the throttle body, open the spring clamp with locking pliers so the hose will rotate on the sensor to allow the filter box lid to twist up and out of the engine compartment. Be sure to disconnect the MAF wiring and, on early models, remove the one screw holding the silencer to the lid. It is also attached to the intake hose, making separation impossible, and prompting broken parts if it’s missed. On models with secondary air pumps, you will also need to squeeze and release the air pump inlet hose at the filter lid.

The reason I started with a simple item like the air filter is that it has to be removed, along with its base, to service a number of other things under the hood. After removing the first few, subsequent filters will come out easier. Under the filter housing, the brake master cylinder and reservoir, ABS unit, shifting mechanism and clutch hydraulics are accessible.

Engine maintenance items on the New Beetle are the same as the other VW models. You’ll need a spark plug boot remover for 2.0L models, and a cap wrench for the oil filter on TDI engines. None of the New Beetle models uses a conventional distributor, relying instead on DIS or coil-on-plug designs. The plastic coolant flange at the end of the cylinder head leaks on these cars like other models. Look for coolant pooled on top of the transaxle. The flange is shaped differently on New Beetle models (see Figure 4) and access is a little more involved.

Timing belt replacement is the same as on other VW models but, due to the shape of the body, there are no good

positions for a standard engine sling for supporting the engine to remove the right side mount. In Figure 5, you can see how tight the clearance is for belt removal. After the mounts are removed (see Figure 6), with the engine supported from underneath (see Figure 7), there is plenty of space to remove the belt, tensioner and water pump. With the engine supported, and mount parts removed, slide the old belt off and the new belt on. Then you can reinstall the mount and complete the repair.

The timing belt drives the water pump on all New Beetle engines. Close examination or even removal is recommended to ensure that it is working properly and not leaking. Most of the factory pumps are equipped with a plastic impeller that often fails and is difficult to diagnose. My advice is to remove and inspect it any time the belt is off and replace it if the car has more than 60,000 miles on the odometer, or if there are any signs of leakage.

From the condition of the belts I’ve been seeing, I wouldn’t stretch the replacement interval for the timing belt past a maximum of 80,000 miles. Here in the Seattle area, cars tend to do a lot of idle time, and that just adds wear time to the belt. All of the engines are potential interference candidates, especially TDI and turbo models.

Emissions
Though not exclusive to the New Beetle, check engine light episodes are a daily fact of life for a lot of cars. The restricted size of the New Beetle engine compartment makes for some common faults. For many episodes, especially concerning the secondary air pump system or tank purge system problems, a close examination of vacuum hoses is often all that’s needed.

Look closely at the hoses that run to the back of the engine. The heat in this area is excessive due to the body configuration, and the hoses tend to crumble. I’ve been using with success a high-temperature BMW hose to replace the OE hose for lasting repairs. We’ve also seen a few failures of the purge solenoid, and its location may be a mystery without a manual. It’s mounted behind the coolant and washer reservoirs on the inner right front fender.

Be aware that some early OBD II cars won’t set codes for the MAF sensor. If you get ongoing codes for fuel trim, or symptoms like loss of power or hard starting, the MAF sensor is a likely problem. With a proper scanner you can also access and run activations to check individual components for operation. This method is especially helpful when testing the secondary air system. If the pump is noisy or inoperative, it will be very obvious.

On TDI engines, the glow plug circuit has had some problems. If you get codes for glow plug resistance or failure, but the glow plugs individually test OK , there is a fix that we have used with success many times. It involves replacing the rubber-covered glow plug buss with a new one. It seems there was a problem with internal breakdown of this buss and, because it’s a covered connector, the breakdown is not obvious from the outside.

The replacement buss will come with two spade connectors and a short pigtail. Cut the connectors off, as well as the original buss, and solder the new buss into place. Make sure you cover the connections with shrink tube and tape to protect the harness from contacting the engine.

Brakes
The brake systems used on the New Beetle are the same as on other VW models. The original rear pad material on the early cars wears out prematurely, but replacement pads from European manufacturers give longer life and provide factory-stopping power. The one area of difficulty is the location of the master cylinder and the ABS components. As stated above, they are located under the air filter housing, so access is the main problem. Flushing the brake fluid is a little more difficult.

I still advise withdrawing the old fluid from the reservoir before flushing the system, to avoid contaminating the lines with “dead” fluid. Other than accessibility, flushing or bleeding of the system is just a standard operation. Adjusting the rear caliper to improve park brake operation is the same as with other VW models, by using a screwdriver in the slot in the arm on the caliper (see Figure 8).

Lights
The body of the New Beetle is cute, and the flush mounting of the exterior lighting likely improves aerodynamics. But that mounting also creates problems as far as retaining the lights. There is a rotating, sliding, cam-locking piece of plastic that is retained in a plastic track that collects things like dirt, water, sand or anything else that can jamb two plastic parts and make them one. When everything is clean and dry, the headlight units come out using these procedures.

The taillights are much simpler. On early cars, bulb replacement requires removing some of the inner trunk panels, which may require replacing some of the plastic retainer clips. Once the panels are off, or the access covers are removed on later cars, you’ll notice that the taillights are held in with a wing nut assembly at the lower part of the light. The upper part of the housing is fitted into a slot in the fender. With the retaining nut off the bottom, the taillight comes out of the body for removal of the bulb holders and bulbs.

There are a lot of these cars on the road, and they’ll be with us for a long time. Just as with the (original) real Beetle, their owners love them and, for the most part, want to maintain them as an investment. That’s where your service expertise is needed and rewarded.

Reader question:
Could you tell me how the rear brake caliper comes off. there is a lock nut on the caliper bolt that I’m not familiar with. when I loosen the bolt nothing seems to move. 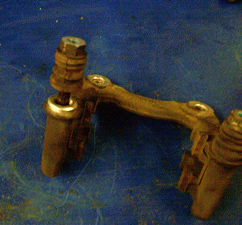 Larry Bailly’s answer:
The rear brake calipers are made up of two parts.  The caliper "knuckle" and the pad carrier.  The knuckle is bolted to the carrier with two bolts that screw into the pins that slide into bores in the carrier. To remove the retaining bolts, you need to hold the pin with a thin 15mm open end wrench on the hex portion of the pin (on the inside of the knuckle), while loosening the bolt with a 13mm wrench on the bolt (on the outside of the knuckle. There is Loctite on the bolt threads, so it takes some force to loosen the bolt and the pin will turn unless the pin is held. 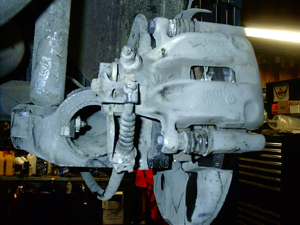