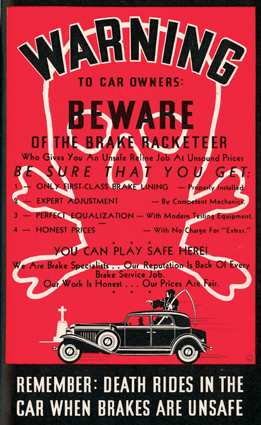 Looking at the BRAKE & FRONT END archives, images and stories of death, destruction and dismemberment were par for the course to sell parts and service during the first 30 years of the magazine. It was not uncommon to see a horribly mangled car or the image of a child chasing a ball into the street in the ads and articles.
In the late 1960s, something changed. Gone were the images of carnage and fear-inducing scenes that would make consumers question the safety of their vehicles. For some unknown reason, they were gone.
Some say it was Ralph Nader and his posse of activist lawyers that made some in our industry think twice about using “loss of life and limb” as a sales technique.
I have my theory – car and roads became safer. In 2010, 32,885 people died in traffic accidents and Americans drove an estimated 3 trillion miles. Traffic fatalities have not been this low since 1950. It gets even worse when you consider that, in 1950, they had to drive only 458 billion miles to kill that many people. Crunching the numbers, your chances of dying in a car crash has been reduced seven-fold.
Back in the day, people were more concerned if their brakes were properly adjusted and if the ball joints were lubricated. Drivers feared if their car was not taken care of, as these items could kill.
My theory is fear never goes away; it is just redirected. It could be oil embargos, Tylenol tampering or even distracted drivers.
By the middle of the 1980s, fear was being generated by the local news that had grown from its 30- minute time slot to one- or two-hour news extravaganzas. To fill the extra time, local stations started to do “investigative journalism.” Soon, shops found themselves the focus of the motoring public’s fear.
I am not saying there are not  bad shops; it is just the consumers’ fear of getting ripped off has been escalated to new levels by not only the media, but also by the internet. Broadcasters and websites are making  promises like “never get ripped off again” or “save hundreds on your next repair.”
It has gotten so bad that consumers complain even when a shop is fair and fixes the car right the first time. Someone has made them fearful, and it is not the shops.
April is one of the two times during the year when the Car Care Council issues results of vehicle inspection check lanes held at community car care events across the country.
And, 2011 wasn’t a pretty picture, as is usually the case. According to the Car Care Council, 84% of vehicles need service or parts, the highest percentage in five years.
Vehicle neglect and the economy have always gone hand in hand, but last year’s results were quite telling of the uneducated consumer mindset toward necessary repairs and preventive maintenance.
An analysis of vehicle inspection forms, submitted by volunteers who conducted a record number of car care events in 2011, revealed several findings, including:
• Nearly one out of 10 vehicles had the check engine light on.
• Power steering, transmission and brake fluids had failure rates of 18% and below.
• Improperly inflated tires were found on 8% of the cars and 11% had worn tread and were in need of replacement.
I say that we should fight fire with fire. Let’s start telling consumers the gory truth about the neglect they inflict on their vehicles. Tell that guy who does not want you to diagnose his glowing ABS light that he could run over a child. Also, tell the lady questioning you about if her tires really need to be replaced, that if she doesn’t, she is putting her life and others at risk.