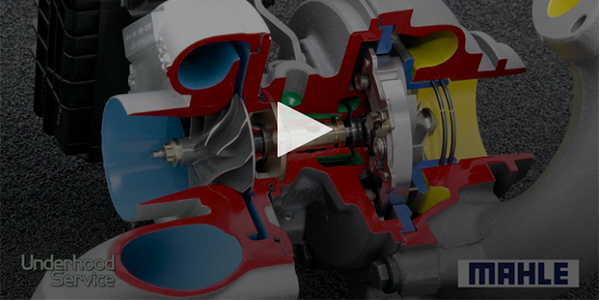 Doug Kaufman explains the concept of performance and efficiency of different engines. Sponsored by MAHLE.

Doug Kaufman explains the concept of performance and efficiency of different engines. Sponsored by MAHLE.

Variable Geometry Turbocharging Technology has been a great advancement to the performance and efficiency in many different engines – and you may have never even heard about it. We’ll explain the concept next.

The use of variable geometry turbos on medium and heavy truck engines is pretty common these days. VGT technology helps to give the vehicle boost when needed due to the different ratios as the vanes open and close based on operation. Cummins uses this technology in the 6.7L Dodge Ram as does General Motors in the Duramax 6.6L. The technology is most commonly used on diesel applications because they have a lower exhaust temperature and are less prone to failures.

These new VGTs are more complex than older wastegate turbochargers and technicians must be trained to accurately diagnose and repair them.

VGTs have been employed on a very limited basis in gasoline engines, but the vanes and the vane manipulation system are very vulnerable to damage caused by excessive exhaust heat. Advances in engineering and material science have allowed for better application of VGT technology in gasoline engines, though it’s still in its infancy – it’s probably coming down the road, but until the technology becomes more foolproof here are some tips to remember when you’re facing a VGT system.

Using the Cummins ISX15 as an example, some of the procedures for maintaining the turbocharger include:

The biggest issues with the diesel and the VGT technology are that the vanes get a lot of carbon build up on them causing issues with the vanes opening and closing for boost build up. The key is regular service, including regular engine oil changes, regular coolant flushes, inspections of the intake and exhaust systems and checking the aftertreatment systems. You may hear recommendations to regularly disassemble the turbo and clean the vanes – this probably isn’t a good idea – opening the turbo means opening yourself up to much more damaging warranty issues.

Video: VIDEO: What ZDDP Is, What It Does and Why It Matters

Video: VIDEO: The Benefits Of A Loaded Strut

VIDEO: How To Keep Wheel Bearing Nuts & Bolts Fastened
Connect with us