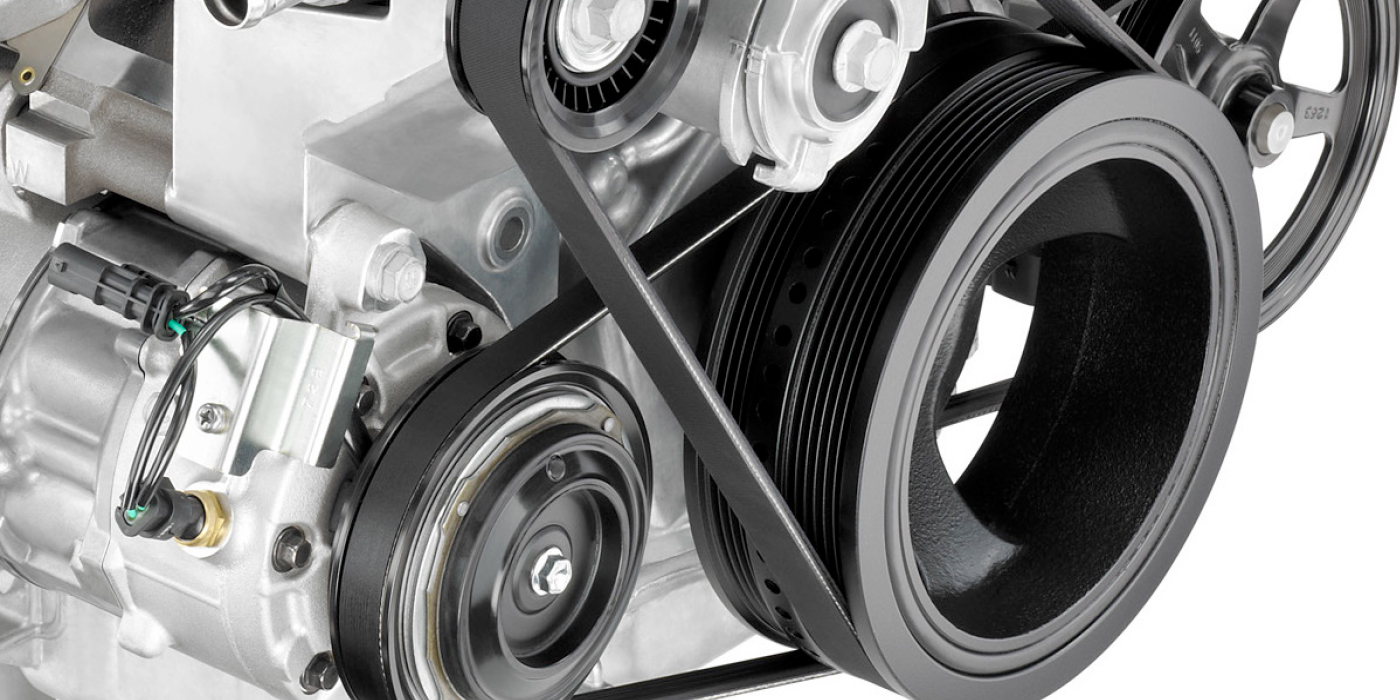 Misalignment and bearing wear can cause the belt to track off-center.

Before the serpentine belt took over, the v-belt was king. The v-belt would warn drivers that it needed service – perhaps through a sharp squeak when the air conditioning clutch engaged or a scream when they tried a sharp parking lot maneuver. If they ignored the symptoms for too long, the belt would come off the pulleys or develop a glaze that made the belt slip even more.

When automakers switched to serpentine belts and automatic tensioners, it more than tripled belt life and reduced the need to periodic belt adjustments. But it didn’t eliminate the serpentine belt’s influence by the same forces as the v-belt:  friction.

Both belts use friction between the belt and pulley to transmit the motion of the crankshaft pulley to the components on the drive belt system. The advantage of a serpentine belt is that it has more surface area than a v-belt. The other part of the equation is the tension of the belt. Tension can increase the coefficient of friction, but too much can cause power loss and even increased wear to the belt.

An engineer could design a belt system that would never slip or wear out. But the power required to turn the components would require a lot of extra fuel that would hurt the fuel economy. If an engineer designs a system that requires minimal power, the belt might slip and wear prematurely.

Engineers manage slippage by controlling how much of the belt makes contact with a pulley. How much force is required to turn a component will determine the amount of belt contact. For example, an A/C compressor pulley might have more belt contact, while a power steering pulley will have less.

The tension of the belt is another engineering equation that must be balanced with the amount of belt contact on a pulley. If the tension is too great, it will cause increased load on the engine and damage due to the side loads on the components. If there is not enough tension, the belt will slip.

The automatic tensioner has a coil spring inside that applies just the right amount of force against the belt to keep it tight. The tensioner also provides a little “give” so it can absorb and cushion shock loads on the belt that occur when the A/C compressor clutch cycles on and off. What’s more, the tensioner automatically compensates for wear and keeps the belt under constant tension. But, nothing lasts forever — not belts and not automatic tensioners.

All too often, an old serpentine belt (or a broken belt) will be replaced with a new one, but the automatic tensioner is not inspected to make sure it is still working properly and is in good condition. This mistake can lead to rapid belt wear and repeat belt failures if the tensioner is weak or worn out.

Belt tension is critical. Too little tension may allow the belt to slip and squeal. Slippage also causes the belt to run hot and age prematurely. And if the belt is loose, it may come off its pulleys. Too much tension on a belt may overload it as well as the shaft bearings on the water pump, alternator, power steering pump and air conditioning compressor, possibly leading to premature failures in these components.

Rust or corrosion can jam the tensioner housing and prevent it from rotating freely. A frozen tensioner cannot maintain proper belt tension. This corrosion is usually a result of road splash, especially in areas where roads are heavily salted during the winter.

Check the movement of the tensioner arm with the engine off. Use a socket with a long-handled ratchet or breaker bar on the tensioner pulley center bolt to rotate the tensioner. There are no specifications for measuring the amount of resistance offered by the tensioner spring, but if the tensioner offers little resistance, it may indicate a weak or broken spring. If it fails to move at all, the tensioner is jammed and needs to be replaced.

Watch for looseness in the arm when the tensioner is rotated. The arm should not wobble or twist. If it does, the tensioner bearings are worn and the unit needs to be replaced.

Note the wear pattern on the tensioner and idler pulley(s). Misalignment and bearing wear can cause the belt to track off-center. This will cause the belt to wear quickly. The tensioner and idler pulley bearings can be checked by removing the belt and spinning the pulleys by hand. All pulleys should turn freely with no binding, roughness or wobble. Any binding, roughness or wobble means these parts are bad and need to be replaced.