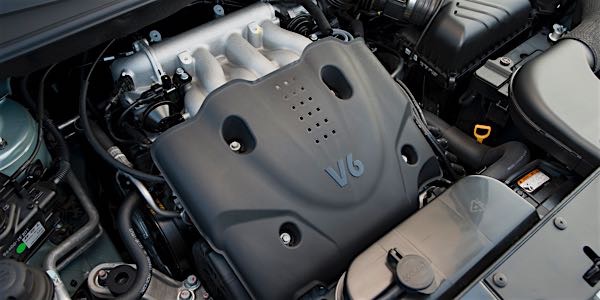 Although Hyundai uses a single timing belt on its 2.7L V6 engines, its 3.3L, double-overhead camshaft engine is equipped with one timing chain for each camshaft and one drive chain for the oil pump. At first glance, a timing chain design allows engineers to shorten the overall length of the engine and reduce rotating friction. 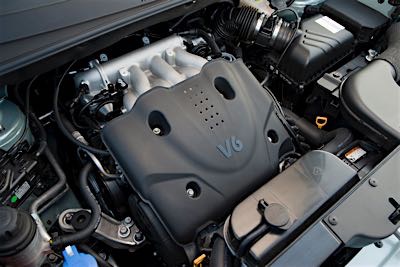 Like it or not, modern technology dictates how the modern independent import repair shop does business. Case in point, the first “rubber” timing belt I saw was in 1968 on a domestic-manufactured single overhead camshaft, six-cylinder engine. Given our experience, we had quite a laugh over the prospect of these gear-toothed “rubber” timing belts lasting much longer than the short-lived accessory V-belts of the day.

Our two focus vehicles, a 2009 Hyundai Tucson equipped with the 2.7L V6 (see Photo 1) and a 2007 Hyundai Sonata equipped with the 3.3L V6 engine (see Photo 2), provide excellent examples of how this changing trend in engine design affects how you might be doing business. 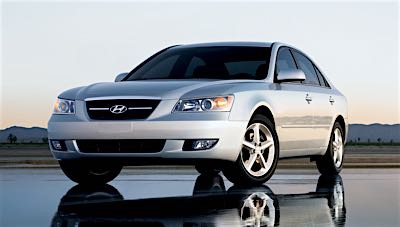 Photo 2: Hyundai’s 3.3L DOHC engine found in the 2007 Sonata incorporates two chains to drive the camshafts and one chain to drive the oil pump. None have scheduled replacement intervals.

Although Hyundai uses a single timing belt on its 2.7L V6 engines, its 3.3L, double-overhead camshaft engine is equipped with one timing chain for each camshaft and one drive chain for the oil pump. At first glance, a timing chain design allows engineers to shorten the overall length of the engine and reduce rotating friction (see Photo 1).

It follows that a second factor might be the continued improvement of engine oils. During a cold start, the timing chain and timing chain guides in many engines depend solely upon an oil mist suspended in the timing cover for lubrication. Unfortunately, this oil mist doesn’t fully develop until the oil warms up. Some engines rely on a stream of pressurized oil not only to lubricate the chain, but also to cool it at high engine speeds. While Hyundai recommends a 10w-30 oil for ambient temperatures above 0° F for its 3.3L engine, modern 10w-30 engine oils use a higher-quality base stock and additive package to improve cold-start lubrication. If it’s any indication of reliability, Hyundai’s 3.3L maintenance schedule extends to 367,000 miles with no recommendation for a routine timing chain replacement (see Photo 2).

While exhaust valve timing is less critical to engine performance, exhaust valve closing times at top dead center exhaust stroke are very critical for “scavenging“ exhaust gases from the cylinder and for initiating air flow as the intake valve lifts from its seat.

In modern DOHC engines, closing the exhaust valve later in the exhaust cycle allows a small amount of exhaust gas to be drawn into the cylinder during the intake stroke, which eliminates the need for an EGR valve. Naturally aspirated engines tend to use more intake/exhaust valve overlap than turbocharged or supercharged engines to take advantage of a slight vacuum created by a fast-moving column of exhaust gas exiting through the exhaust port. If an engine is turbocharged or supercharged, valve overlap is usually reduced to prevent the initial intake charge from being lost into the exhaust stream.

CVVT controls valve timing by changing the position of each camshaft in relation to the crankshaft. A pulse-modulated oil control valve for each camshaft controls the flow of engine oil into a camshaft “phaser” that adjusts valve timing. Modern phasers are usually vane types that push against a return spring mounted inside the phaser.

A fixed orifice in the phaser releases oil pressure to allow the phaser to return to base valve timing. Valve timing is adjusted proportionally to the amount of oil pressure acting against the phaser’s return spring and metered orifice. The greater the volume of oil metered into the phaser, the greater the pressure against the return spring and the more the camshaft/valve timing is changed. Camshaft position is reported to the engine control module (ECM) by a camshaft or a valve timing position sensor (CMP) mounted in the timing cover.

The CVVT solenoid incorporates a solenoid-operated pintle valve much like that found in a common fuel injector. The pintle valve is protected from oil-borne debris by a very fine oil-filtering screen (see Photo 3). Depending upon factors like engine speed and load, the ECM adjusts intake and exhaust valve timing to provide the most efficient combination of valve timing for any operating condition.

Since CVVT systems adjust valve timing by controlling engine oil pressure inside the phaser, they can be sensitive to engine oil viscosity. Hyundai specifies a 5w-20 oil for its 3.3L engine, especially when operating in 0º F and colder ambient temperatures. A 10w-30 engine oil can be used when operating above -18º C (-.04º F) ambient temperatures. A heavily sludged engine will usually have restricted oil passages to the CVVT solenoid, which limits the total range of valve timing adjustment, which is why Hyundai specifies an API SL, SM or above, or an ILSAC GF3, GF4 grade or above motor oil to keep its engines free of sludge and varnish. 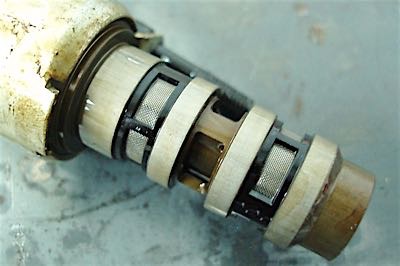 Photo 3: This oil control valve design is typical of most CVVT applications. Notice that the very fine inlet screens to the pintle valve are easily clogged with sludge or varnish.

On the other hand, the labor time for replacing the Tucson’s timing belt under the “severe service” schedule is 3.3 hours plus 0.5 hours for tensioner replacement. A timing chain replacement for the Sonata requires 10.6 hours, with 0.5 hours added for chain guide replacement. Obviously, a Tucson equipped with the 2.7L V6 is more profitable to maintain than the Sonata with the 3.3L engine.

However, the billable hours for a single timing chain service on the Sonata are nearly equal to three timing belt replacements on the Tucson. The “dollars and sense” of this statistic indicates how your market share might be changing, especially if you service more Hyundai Sonatas than Tucsons.