The Alliance Wraps Up One Convention, Sets Sights on Another – UnderhoodService

The Aftermarket Auto Parts Alliance capped its tri-annual “Aftermarket Magic” convention in Orlando, FL, last week by announcing the next convention will be held November 2015 in Las Vegas. 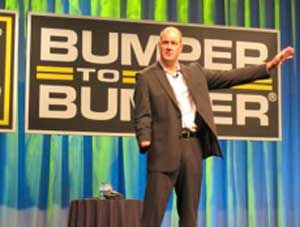 In a four-day event that ran March 21-24, the Alliance provided members with educational opportunities at 34 seminars as well as three days of vendor expo, inspirational speeches and entertainment.

Former Major League Baseball pitcher Jim Abbott, who played with the California Angels, New York Yankees, Chicago White Sox and Milwaukee Brewers, addressed the general session Friday morning. Abbott, who played for 10 seasons in the MLB despite having been born without a right hand, recalled his struggle for acceptance and conquering and adapting to his disability.

“I was born missing my right hand. I never wanted to make a big deal about it. I still don’t,” Abbott told attendees. “Being born this way, I knew what it was like to be different. My dad used to say what was taken away once, is given back twice.”

Abbott has faced his share of cruelty. He recalled that in high school he was on the football team. At a pep rally, members of the opposing team strode through the pep rally, wearing tube socks on their right arms in an effort to make fun of Abbott’s disability.

As he made it to the majors, Abbott said he hoped he could move past the label of a “one-handed pitcher.” But at every game, he’d get a tap on the shoulder. A mother or father was asking Abbott to speak to their child who had a disability, which he readily did. “And sometimes I didn’t want to go,” Abbott said. “Because those meetings were a reminder to how I was different.”

“But I never left uninspired,” Abbott said. “I was given so much. I was blessed with my left hand and my left arm. To me, that’s the heart of adapting. Challenge comes with struggle and difficulty. The question is, what are you going to do about it?”

Jon Wee and Owen Morse, who form the comedy-juggling duo The Passing Zone, provided their own unique brand of entertainment Thursday night, tossing sickles, machetes and chainsaws through the air as well as clubs strapped with rat traps above an unwitting audience member.

Throughout their performance, Wee and Morse stressed the importance of “ICE,” or innovation, collaboration and execution in business. The duo has been awarded five Guinness World Records and 18 gold medals from the International Juggler’s Association.

On Thursday and Friday night of the event, numerous $500 prizes were awarded to attendees whose names were chosen at random. Three finalists received prizes of $5,000, $10,000 and $15,000, in a contest sponsored by Federal-Mogul.

Alliance President and CEO John Washbish announced the next convention will be held November 2015 in Las Vegas.