A Scottish technician was diagnosing a customer’s Kia that had been brought in due to poor performance. After running numerous tests, he checked the air filter and found six pounds of peanuts that a squirrel had hidden in the air filter housing and intake pipe.

Below is the article as it appeared on the Berwickshire News website. 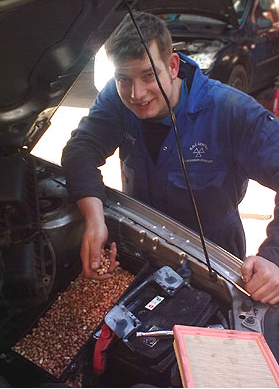 A DUNS mechanic thought he was going nuts last week when checking a customer’s car for poor performance.

Having carried out some basic tests, Stuart Gillies from J Aitchison (Duns) Ltd took a look under the bonnet – and couldn’t believe his eyes. Hundreds of peanuts were crammed into the vehicle’s air filter housing and intake pipe.

Stuart commented: “I’ve never seen anything like this before so it was a bit of a surprise!

“I’d done all the usual checks, plugged it into the computer and everything and nothing came up, so I went under the bonnet and had a dig around.

“I couldn’t believe my eyes! An engine needs both air and fuel to run and I discovered that this car was getting plenty of fuel but not enough air due to a large number of peanuts blocking the air intake system.

“It seems that a local squirrel had been pinching nuts that were meant for the vehicle owner’s bird table, and storing them in the car’s air intake for what has turned out to be not so safe keeping!”

To read this article on the Berwickshire News website, visit http://www.berwickshire-news.co.uk/news/local-headlines/squirrel_hides_6lbs_of_nuts_then_bolts_1_1071251.