Recently, we serviced Paul’s 2002 Dodge Durango. The next day he parked his truck at the airport and flew to Philadelphia for a sales convention. When Paul returned, he called me with a problem. While leaving the airport he put the truck in reverse, but it didn’t move for a few seconds. I asked him to bring the Durango in so we could determine the problem, since the truck hadn’t had any issues before we serviced it.

The complaint involves a transmission delayed shift condition that may occur following the replacement of the internal cooler return filter.

Note: This information applies to vehicles equipped with a 45RFE or a 545RFE automatic transmission (sales code DG4 or DGQ respectively).

The customer may experience an initial delayed shift engagement following an extended off (not running) period of time, generally after being parked overnight. The initial shift engagement may feel like a delay or slip when a transmission gear (reverse or drive) is first selected after engine start.

The customer may not experience the delayed shift engagement until after the transmission has been serviced, where the cooler return filter was replaced. The condition is not detrimental to the transmission, but may cause concern with the customer.

The repair will require one Mopar P/N 04799662 cooler return filter. 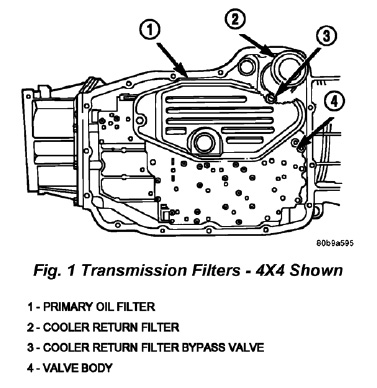 All 04799662AB cooler return filters with the "AB" suffix are suspect. The above condition may be corrected by replacing a suspect "AB" filter with a new cooler return filter whose part number is 04799662 (with no suffix or with a suffix that is other than the "AB" level).

Written by ALLDATA Technical Editor, Eric Seifert. Eric is an ASE certified Master Technician and Engine Machinist. He is a graduate of the De Anza College Automotive Technology Program, with 20 years of independent shop and parts store experience.

Technicians, shop owners and service advisors are not Shakespeare. If something can be summed up in two words, we will do it. Unfortunately, this can lead to a loss of detail when it comes to an ignition complaint or symptom.

Take the phrase, “no spark.” It typically means the engine is not starting because a spark can’t be “seen” or “felt” between the electrodes. But, “no spark” is not a diagnostic or repair path.