Tech Feature: The Nuts and Bolts of Belt and Hose Service – UnderhoodService

After I earned my driver’s license in 1957, I bought a 1953 Ford V8 so I could drive to school and to work. The striking thing about the 1953 Ford was that, at 40,000 miles, the original-equipment belts and radiator hoses had cracked so badly that I didn’t know if I would make the 70-mile drive home from the dealer’s car lot. 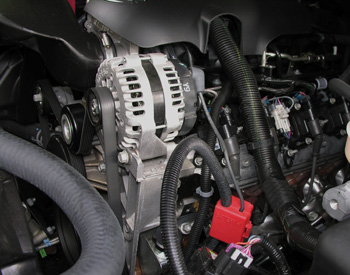 In those days, it was suggested that belts and hoses be changed every two years or 24,000 miles. So to avoid dealing with an imminent breakdown, my dad had our local mechanic replace the cracked belts and hoses. I was forever thankful because, at that time, I had neither the tools nor skills to accomplish such a task.

Today, belts and hoses are a routine inspection item and may not need replacement even at 100,000 miles or more of service. Unfortunately, many vehicle owners and technicians forget that heat, load, pressure and atmospheric pollutants eventually deteriorate a vehicle’s rubber parts.

City driving is perhaps the hardest on underhood rubber due to the high concentrations of heat and airborne ozone. While over-the-road driving least effects the life of rubber components, a roadside failure can leave a driver stranded for hours in rural areas.

Belt Wear
Accessory drive belts transmit engine torque to an assortment of pulley-driven accessories including the water pump, alternator, power steering, air conditioning and air injection pump. In addition to the effects of high underhood temperatures and atmospheric air pollution, frequent use of the air conditioner compressor, power steering pump or alternator tend to accelerate wear on the drive belts.

As the rubber in the belt begins to harden, cracks begin to appear on the belt’s inner circumference. Each crack causes a stress point to develop in the belt’s structural fabric and, as the miles accumulate, the belt becomes more likely to break. Although auto manufacturers consider mild cracking normal, a serpentine or V-belt should be replaced if it exhibits fraying along its edge, deep cracking on its inner circumference or glazing caused by excessive belt slippage. Because most modern engines are equipped with only one or two belts, an unnoticed defect can rapidly develop into a catastrophic failure.

Belt Types
Belts fall into three different categories: V-belts, serpentine belts and specialized belts like camshaft and balance shaft timing belts. V-belts have been with us the longest, having been introduced in the 1920s to power water pumps and generators on cars like the Ford Model T. As engine accessory drives became more complex, automakers began installing serpentine belts to simplify drive belt architecture.

Unlike a V-belt, a serpentine belt uses both the smooth and the grooved sides to drive accessories. Specialized belts like timing belts are used to maintain precise timing intervals on cog-driven timing devices like engine camshafts and balance shafts. These belts must be precision-built and must last at least 100,000 miles before needing replacement.

While V-belts generally don’t require special tools for installation, serpentine belts often require special wrench sets available from aftermarket sources to relieve the tension on the automatic belt tensioner so the belt can be replaced. When working in confined areas between the engine and fender, technicians may also need a set of zero-offset wrenches to loosen accessory mounting bolts on front-wheel-drive (FWD) vehicles. A tool designed to help thread the belt over the pulleys also comes in handy on FWD applications.

Recommended Related Replacements
Because accessory drive components tend to wear out at the same rate, many shops recommend replacing the water pump, belt tensioner, idler pulleys, and camshaft and crankshaft seals when the timing belt is replaced. Similarly, when a water pump or power steering pump is replaced, the belts, idler pulleys and tensioner pulley should be inspected and replaced, if needed. In addition, if the radiator is removed, the radiator and other coolant hoses should be replaced, if required.

A belt part number usually identifies the type of belt and the length and width of that belt. Keep in mind that automotive belts may differ in design from belts used for implement applications. A lawnmower drive belt, for example, may not interchange with an automotive drive belt. To minimize returns, use the eight digits in the vehicle identification number (VIN) to correctly identify the engine and its accessories. If the vehicle has been modified or the application is in doubt, match the new belt with the old either by direct measurement or by cross-referencing the old belt’s part number with the new.

How’s the Hose?
Hoses are designed to provide a flexible connection between two fixed components like an engine and radiator. Unlike a belt, a rubber hose is usually attacked from the inside by harsh chemicals forming within the cooling system. Hoses are also attacked externally by high underhood temperatures and atmospheric pollution.

Ultimately, a deteriorated coolant hose begins to swell or develop leaks at the hose connections. A radiator hose should not only be tested for loss of flexibility, it should also be tested for internal deterioration by allowing the engine to cool and slowly releasing the pressure on the radiator cap. With the pressure released, squeeze the sides of the hose together. If the hose feels hard and brittle, or spongy and mushy, it should be replaced.

Hose Types
Hose is generally designed to transport specific fluids at a specific temperatures and pressures. To illustrate, while a low-pressure fuel hose designed for a carbureted engine and a high-pressure fuel hose designed to transport fuel for a fuel-injected engine might appear the same, the low-pressure hose will cause a catastrophic failure when used in a fuel injection application.

Similarly, a high-pressure oil hose is generally made with steel or fabric reinforcements to help contain hot oil under high operating pressures. In contrast, fuel line hose is made to contain highly volatile petroleum fluids at relatively low temperatures and pressures. And, while radiator hose might look like a good substitute for gasoline tank filler neck hose, it will rapidly deteriorate when exposed to gasoline.

Replacement Notes
Because late-model engine compartments are very confined, most applications require molded radiator and heater hoses to help navigate tight bends and make connections with different inlet and outlet diameters. To avoid kinking, the small coolant hoses connected to the throttle body and intake manifold are molded as well. Substituting a molded hose with a universal-fit or bulk hose can stress and ultimately break radiator and heater core connections and is, therefore, not recommended.

If you’re buying a new or remanufactured engine, don’t forget to inquire if the warranty might be voided if the engine is damaged by a leaking hose or broken accessory drive belt. Belt and hose sales represent one of the most lucrative add-on sales opportunities. Don’t miss your chance to “make the sale!”

Gary Goms is a former educator and shop owner who remains active in the aftermarket service industry. Gary is an ASE-certified Master Automobile Technician (CMAT) and has earned the L1 advanced engine performance certification. He is also a graduate of Colorado State University and belongs to the Automotive Service Association (ASA) and the Society of Automotive Engineers (SAE).