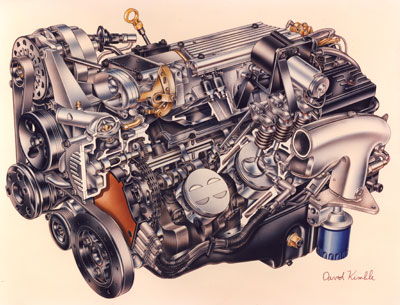 The Chevrolet LT1 5.7L V8 engine that was produced from 1992 to 1997 has some significant differences compared to the previous small block Chevy it replaced, and the third generation LS1 small block that later replaced it. The most obvious difference that distinguishes the LT1 from these other engines is the front-mounted Opti-Spark ignition system. Other differences from the earlier small block Chevy include a reverse-flow cooling system and mass airflow sequential fuel injection system (though early LT1s were equipped with a speed-density multiport fuel injection system).

LT1 Basics
The LT1 has a cast iron cylinder block with aluminum heads in the Corvette, Camaro and Firebird applications, but cast iron heads on the Buick, Caprice, Cadillac and Impala models. The Corvette block also has stronger four-bolt main caps while the rest have two-bolt mains. Both blocks have the same 10125327 casting number. 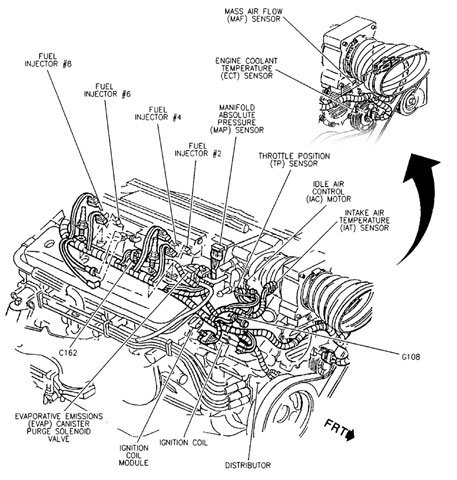 Compared to the 1991 Chevy 350 L98 engine with Tuned Port Injection, the 1992 LT1 produced 20% more horsepower and a much broader torque curve. It also got better fuel economy, making it a worthy successor to the long-lived small block Chevy. Horsepower ratings for the various LT1 engines range from 260 hp to 300 hp depending on the model application and year.

Though the LT1 has a different block and heads than the earlier small block Chevy V8, the engine mounts and bellhousing configuration were kept the same, allowing the newer Gen II engine to be swapped into older vehicles.
The crankshaft in the LT1 is similar to a small block 350 crank, and has the same casting number: 14088526. But the LT1 crank is balanced differently to accommodate lighter pistons. Consequently, if you are rebuilding one of these engines with an exchange crankshaft, make sure the crankshaft is the correct one for an LT1, not a 350.

Several different versions of the LT1 were made, including a smaller displacement 4.3L L99 (offered in the 1994-’96 Caprice for better fuel economy. The block casting number on the smaller engine is 10168588 and it also has “4.3” cast on the side. The block has smaller 3.74” cylinder bores and a shorter 3” stroke crankshaft with longer connecting rods. 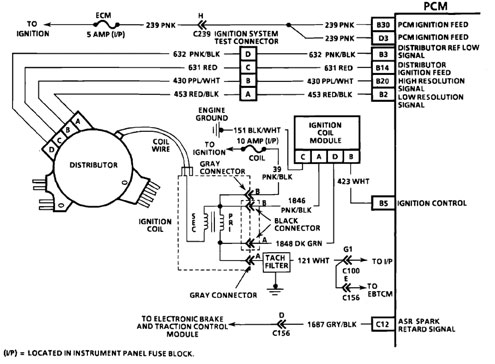 During its production run, the LT1 used several different camshafts. On 1992-’95 Corvette and Camaro engines with aluminum heads, the engine had a steel roller cam with a hole in the front of the cam and a short (0.320”) dowel to locate the timing gear, and a hole with 16 splines for the distributor shaft. These cams have “241” stamped on them by the first lobe.

On 1994-’96 LT1 engines with cast iron heads, the pilot hole in the front of the cam is larger and deeper, with a longer (0.685”) dowel pin to drive the revised Opti-Spark distributor. The cam also was a milder grind with less lift and duration to improve low-end torque and fuel economy. These cams have “600” or “779” stamped near the first lobe.

In 1995, the aluminum head LT1s also got the revised Opti-Spark distributor and camshaft with the longer drive pin. These are marked “242” or “705.”

The smaller 4.3L L99 engines all had cams with the longer dowel pin for the distributor drive, and used the milder “600” or “779” camshaft.

We’ve heard of some instances of LT1 valvetrain noise caused by roller lifters pitting and developing flat spots on some of these engines. The underlying cause is usually too infrequent oil changes or an oil contamination problem.

If you’re replacing the timing chain and gear set on an LT1, be aware that two different cam gears were used depending on the version of Opti-Spark distributor on the engine. The 1992-’95 aluminum head LT1s with the short dowel pin setup used a cam gear with a splined center hole (P/N 10128349). Later versions used a different cam gear (P/N 10206039) with a larger hole and no splines for the revised pin-drive distributor.

In addition to the camshaft and distributor changes, the front engine covers were also different depending on which distributor was used. In 1996, the front cover was again revised to accept a crankshaft position sensor for OBD II misfire detection.

Reverse-Flow Cooling System
One reason why the new engine performed better was the reverse-flow cooling system. By routing the coolant to the cylinder heads first and then the block, the engine could handle a higher compression ratio and maintain more consistent cylinder head temperatures.

The water pump on these engines is driven by a small shaft off the camshaft gear. This improved cooling reliability (no belt to slip or fail), but it also creates a potential leak path for oil. The water pump driveshaft seal typically leaks once the engine has about 60,000 miles on it. The fix is to replace the seal, which takes about two hours and requires a special tool (J39087) to install the seal. The tool prevents the lips on the seal from deforming when the seal is installed. If you don’t use the tool, chances are the new seal will leak — and you’ll have to do the job over again!

The cooling system on the LT1 tends to trap air when you are attempting to refill it, so there’s a small bleeder screw on the thermostat housing to help vent air. But even this may not be enough, especially on the Camaro. If air gets trapped in the system, the temperature sensor for the cooling fan may not be in contact with the coolant, preventing the fan(s) from coming on, causing the engine to overheat. To get the air out, you may have to raise the front of the vehicle up so the radiator becomes the highest point in the system. Add as much coolant as the system will take, then lower the vehicle, start the engine, let it warm up, then shut it off. After the engine has cooled, recheck the coolant level and add more coolant as needed to top off the system. 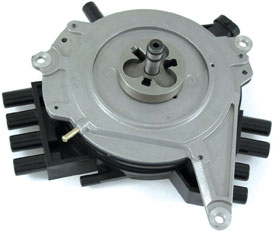 Opti-Spark Ignition
The front-mounted Opti-Spark distributor on the LT1 is also driven by the cam gear. Inside are two optical sensors that read slits in a rotating disk to inform the PCM about camshaft position and ignition timing. The PCM controls spark advance, while high voltage is provided by a single coil and ignition module mounted by the front of the right cylinder head.

Early Opti-Spark systems on the 1992-’94 Corvette and 1993-’94 used an unvented cap that tended to trap moisture, resulting in internal corrosion, arcing and misfiring. Later Opti-Spark systems used a vented cap with two hose connections (vacuum and air vent) to keep moisture out of the cap. 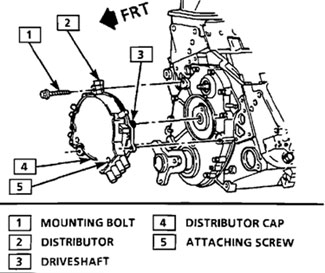 The distributor caps on these engines typically go bad after about 60,000 miles, and the OEM plug wires aren’t the best either. So if you’re doing preventive maintenance on a high-mileage LT1, and the cap and wires have never been replaced, new ones would be highly recommended.

Sequential Fuel Injection
In 1992 and 1993, the Corvette still used a speed-density multiport fuel injection system that gang-fired the injectors simultaneously. There was no airflow sensor, so fuel metering was based on engine rpm, temperature, throttle position and MAP sensor inputs to the PCM. In 1994, GM upgraded to a mass airflow system with sequential fuel injection. The result was better performance, fuel economy and emissions.

The only TSBs GM has issued on the LT1 fuel injection system are those dealing with keeping the fuel injectors clean by using Top Tier gasolines (which contain adequate levels of detergent), and recommendations for cleaning dirty fuel injectors.

Some LT1 injectors have had failure problems due to internal corrosion, which some have blamed on gasoline mixtures that contain 10% ethanol. The injector coils short out internally and cause a lean fuel condition and/or misfires in one or more cylinders. On 1996 and later OBD II models with misfire detection, this should set one or more P030X cylinder misfire codes depending on how many injectors are misbehaving.

Injector resistance can be tested with an ohmmeter, and should read 11.8 to 12.6 ohms. If the injector reads out of specs, it should be replaced.

A good MAF sensor should read about 6 to 9 grams/second when the MAF PID is viewed on a scan tool. If the sensor is reading out of range, check for air leaks and/or try cleaning the sensor. If it still reads out of range, it probably needs to be replaced (which costs about $300 list price!). 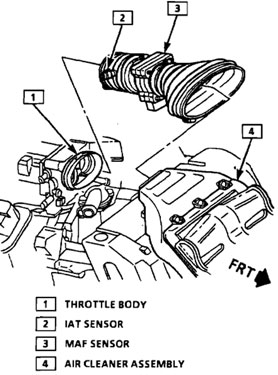 Bad Knock Sensor
Another problem that may be encountered on these engines is detonation or spark knock when accelerating under load. Detonation can be caused by a variety of things, including engine overheating, loss of EGR, low octane fuel or a buildup of carbon in the combustion chambers. But another possibility is a fouled rear knock sensor (see GM TSB 02-06-04-023A). The knock sensor sits in a cavity in the back of the engine. Water can get into the cavity (often because somebody power washed the engine), causing it to fail. The fault may set a code P0332. The fix is to replace the corroded knock sensor with a new one, and to build a dam around the cavity with RTV to help keep water out.

Cranking Out Power
Gen II crankshafts are all nodular iron with one-piece rear seals. LT1 cranks have radiused fillets while the LT4 cranks are prepped with rolled and undercut fillets. 1996-1997 versions have a powdered-metal crankshaft position sensor. This reluctor ring has four timing teeth and is aligned on the crank via the keyway.

A two-piece damper and hub assembly is used on Gen II engines. The hub adapter is installed on the crank snout with an interference fit. The crank snout key does not engage the hub adapter. It has a notch to clear the adapter. From 1992 to 1995, the key was notched back flush with the crank sprocket, but with the advent of OBD II engine management in 1996-1997, the key protrudes farther in order to locate the crankshaft position sensor reluctor wheel. The hub adapter is secured with a 7/16 number 20 bolt and a dedicated flat washer. The combination damper/crank pulley then bolts to the hub assembly with three bolts.
— From the book: Small-Block Chevy Performance 1955-1996 by John Baechtel. 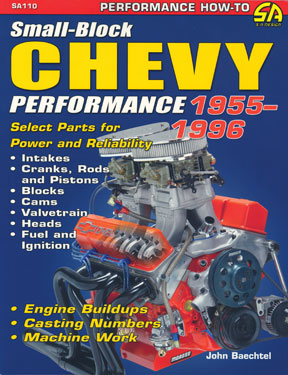 Originally published as two separate volumes, Small Block Chevy Performance 1955-1996  covers the latest information on all Gen I and Gen II Chevy small blocks in one volume. This book continues to be the best power source book for small-block Chevys. The detailed text and photos deliver the solutions for making your engine perform. Extensive chapters explain proven techniques for preparing blocks, crankshafts, connecting rods, pistons, cylinder heads and much more. Other chapters include popular ignition, carburetor, camshaft, and valvetrain tips and tricks. One chapter focuses exclusively on service and building tips for the LT1 and LT4 engines.