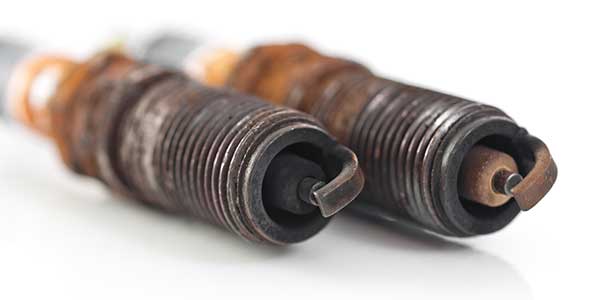 Spark plugs are the “canary in the coal mine” of the combustion chamber. The electrodes and porcelain can show short- and long-term problems if you know what to look for.

Spark plugs are the “canary in the coal mine” of the combustion chamber. The electrodes and porcelain can show short- and long-term problems if you know what to look for.

Most OE spark plugs have a life of more than 100,000 miles, thanks to electrodes that contain precious metals like platinum and iridium. OEMs consider the spark plugs a part of the emissions system on most modern vehicles.

If the plugs fail sooner than the recommended interval, solve the problem before installing new plugs. If you are replacing spark plugs to solve a misfire problem, the car will be back.

Carbon Fouling
If the spark plugs have a matte black or grey appearance, it could be carbon fouling — something typically caused by a fuel mixture that is too rich.

During normal combustion, most of the fuel oxidizes and changes into carbon dioxide and carbon monoxide gas. When there is more fuel than oxygen, the carbon in the unburned fuel polymerizes into carbon deposits. These molecules like to stick to the hot spots in the combustion chamber and this includes the spark plug’s tip and insulator.

Curing the problem will typically point to the fuel system and how the engine is breathing. If a fuel injector is clogged or sticking open, extra fuel can cause carbon problems.

If the mass air flow sensor or oxygen sensors are not accurately reporting the air coming into the engine or the oxygen content in the exhaust stream, it could cause a rich-running condition that can cause carbon to foul the spark plugs.

Another factor is how the air flows past the valves. If the air is restricted or has to flow past carbon deposits on the intake valves, the air will be turbulent and disturb the flame front and fuel droplet size in the combustion chamber. This means that the fuel injected into the intake port or combustion chamber will not entirely burn. 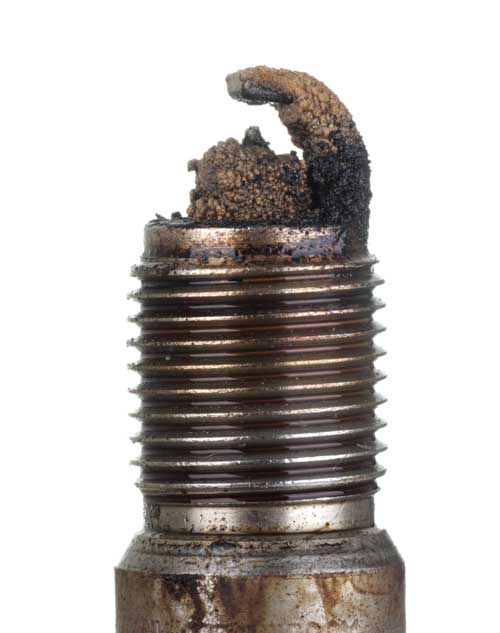 Oil Fouling
Oil fouling of a spark plug typically results in shiny black appearance. If enough oil is in the combustion chamber, the deposits can build up on the tip, porcelain or shell.

If you can’t determine if it is carbon or oil fouling, smell the plug; it will smell like engine oil. The oil can come from the piston rings, valve stem seals or the positive crankcase ventilation (PCV) system. Leaking piston rings can be diagnosed with a leak-down test. If one cylinder has oil fouling, a relative compression check can help to assess mechanical issues with that cylinder.

Malfunctioning PCV systems are becoming a leading cause of oil fouling for modern engines. These systems have become more than just a spring-loaded check valve. Modern systems can separate oil from the crankcase vapors and electronically regulate when the engine ingests the vapors.

Some PCV systems have a heater to ensure that the valve does not freeze under certain conditions when condensation is present. If the valve does freeze, it can cause higher-than-normal crankcase pressure. This can cause oil to be forced past the valve seals.

If the PCV valve is stuck open, the excess vapors and oil droplets can quickly foul the spark plugs.

Another source of spark plug oil fouling is a failed turbocharger. The seals on the turbine shaft are robust, but they can be victims of heat and poor oil quality. The oil that lubricates the shaft can enter into the pressurized intake and eventually the combustion chamber.

The main culprit in these problems is vacuum generated in the cylinders that sucks engine oil past the rings and into the combustion chamber. On vehicles with cylinder deactivation, the deactivated cylinder has negative pressure and would draw oil droplets in the crankcase past the ring and eventually into the converter. This has happened on some GM and Honda engines.

On some vehicles with variable valve timing (typically on the exhaust and intake cams), the valve timing could produce higher-than-normal vacuum pressures that could suck oil past the rings. This was the case for some recent Toyota, Honda and GM models. The customer would report increased oil consumption that exceeded a quart every 1,000 miles.

Coolant Problems
Internal coolant leaks can foul a spark plug and cause a misfire. The problem could be a leaking intake manifold or a head gasket, and the fouled plug might be localized to one or two adjacent cylinders. The burned coolant leaves ashy white deposits on the electrodes and insulator, creating hot spots that could cause pre-ignition and a misfire code being set.

When the plug is pulled, it might have a chalky appearance on the ground strap and center electrode. Modern coolants do not cause this type of buildup quickly due to the reduction of phosphate, zinc and other additives that can contaminate the catalytic converters. Unfortunately, it also means that drivers will run a vehicle with a coolant leak for several thousand miles while the plug becomes slowly fouled. In the past, the converter would become clogged and stop the engine before significant damage was caused.

Advertisement
In this article:Spark Plug