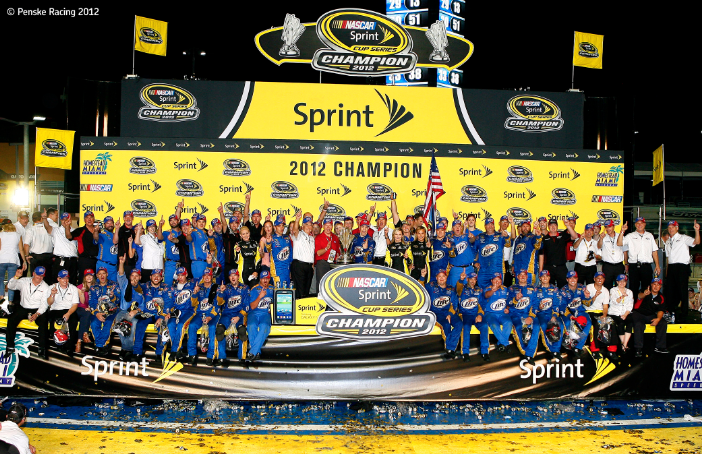 A year ago, when SKF and Penske Racing finalized their partnership agreement for both the NASCAR and IndyCar teams, the new relationship they defined was distinctly different than the traditional roles of sponsor and team.

Unlike many companies involved with racing teams, SKF brings its years of racing experience in the very highest series of the sport and customer event marketing to add a new level of participation with the Penske Racing team. The culmination of this helped to deliver the first ever Sprint Cup championship for driver Brad Keselowski, his crew chief Paul Wolfe and team owner Roger Penske, said the company.

Poul Jeppesen, president of SKF North America explains, “When we made the commitment to Roger Penske last year we made it clear that SKF would be more than just a logo on the vehicles. The real beauty of SKF is beneath the skin, and Roger knew well of our long history of motorsports involvement, highlighted by our 65 year technical partnership with Ferrari in Formula 1.”

Partnering since last November, SKF and Penske Racing have over 25 different application and development projects, drawing from all five of SKF’s technology competence areas: bearings, seals, lubrication, mechatronics and services.

Paul Wolfe, the first crew chief to win both Nationwide and Sprint Cup Series championships, congratulated SKF on its ability to quickly deliver with many important contributions, and said, “SKF allows me to give Brad a race car that is faster and more fuel-efficient. These components allow for more power and the flexibility needed to pursue the best racing strategy.”

In fact, the No. 2 Penske/SKF Dodge gained a reputation as being among the most fuel-efficient machines on the track. Keselowski’s victory on September 30th at Dover Speedway was a result of better fuel economy.

SKF utilizes its advanced computerized modeling and simulation systems to closely evaluate the performance of system components in these high stress, high load environments. The goal is to optimize the complete unit so that all the inter-related components function as one fast, efficient, and reliable assembly. Ken Fegely, SKF racing engineer explained, “It’s a way of working that SKF has been applying in demanding applications from earth movers, to large wind turbine gearboxes, to the latest aerospace engines for the new fuel-efficient composite jet airline fleets. This experience and our knowledge in bearings, seals and lubrication will be even more critical as Penske moves to the Ford Platform for the 2013 season.”

As a technical partner to the entire Penske Racing organization, SKF brings its world-class knowledge of reducing friction to both the NASCAR and IndyCar racing arenas. As a business partner, SKF provides its sales teams with the opportunity to meet customers in a non-business setting, further strengthening customer relationships. Working with Penske companies and partners to develop business relationships is also a key element of SKF’s program.