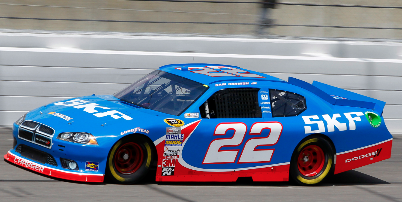 SKF’s primary colors will be showcased at one of NASCAR’s prime events this weekend when Sam Hornish Jr. gets behind the wheel of the #22 SKF Dodge Charger for Sunday’s Good Sam Roadside Assistance 500 at Talladega Superspeedway.

“We want to lead the right lap there on Sunday – the final lap that pays the big winner’s check and awards the huge trophy,” said Hornish.

Although Hornish has not raced a Sprint Cup car at Talladega in two years, he is very much aware of what it takes to win at the acclaimed venue.

“What it all comes down to is being in the front pack at the very end. You can lead laps all race long, but the most important thing is to lead the right lap. You have to be in the mix coming off Turn 4 and heading down through the tri-oval to the finish line.”

Hornish has certainly learned how to lead laps on the circuit’s longest track. In his five career Sprint Cup Series starts on the massive 2.66-mile layout, he has led laps in three of those battles. Of all his career Cup laps led (71), 13 percent (9) have come at Talladega Superspeedway.

“Penske Racing has always had great cars and strong engines for the races at Daytona and Talladega,” Hornish said. “After all, it was my teammate (Keselowski) who brought the winner’s trophy home from there in the first race back in May.  I’m looking forward to bringing home the SKF Dodge Charger this Sunday in just the same way.”

Because the Nationwide Series has the weekend off, this Sunday’s Sprint Cup race will be the sole focus for Hornish, who has done double duty on a number of weekends this year.

“I’m confident our drivers will be extremely competitive at Talladega this weekend,” said Poul Jeppesen, President and CEO of SKF North America.  "What about an SKF / Penske Racing one-two finish?  That’s very possible and would be terrific!"